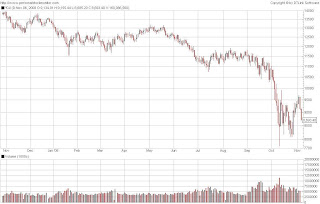 Obama was elected the day before yesterday and since then the stock market has virtually crashed again. As of this moment, it has lost almost ten percent of what was left of its value.

Meanwhile, we read this at Reason Hit and Run:

Andrew Young predicted that "There would be a boost of 1,000 points on the stock market the first week after he's elected." The Telegraph wondered if a "Barack Obama victory [will] boost shares."

Damn! So I guess he is not the Messiah after all. I'm stunned.

Seriously, it does concern me that people seem to have messianic expectations about this guy. It's part of a wider and more vicious phenomenon, I believe, in which the state serves as the new church, or the new God. More accurately, it's what Nietzsche called it: The New Idol.

"It bites with stolen teeth, and bites easily. Whatever it says is false and whatever it has is stolen." See Thus Spoke Zarathustra, Pt. I Ch. 5. He saw it coming.

People are going to political leaders for things that the should never, ever try to get from the state: a sense of meaning and a sense of personal hope for their lives. These things are your own responsibility. It's bad enough when people run to the state to get money and power over others, but in that case at least the power and the loot are real. The meaning and hope your Fuehrer infuses into your life are utterly false from beginning to end. If you think your Leader lights up your life, my friend, you are only more deeply in the dark. That God is a false God, an idol.

Hat tip to Kathryn Muratore for this video:

I, too, am puzzled by the Obamamania. I could understand people seeing him as the "lesser of the two evils" (I know you disagree), but the absolute fervor strikes me as odd. This became particularly apparent when I was watching a news show the night after the election. Eight "people on the street" were interviewed and almost all of them were just taken by him. What struck me as particularly odd was that it was apparent that almost none of them really had any idea what his policies were going to be, etc. It left me baffled. I guess this is why I throw my vote away on third party candidates. Thoughts on what causes this fervor?

"...seeing him as the "lesser of the two evils" (I know you disagree).." Believe it or not, I don't exactly disagree with that. I very seriously considered voting for him, mainly because of the paramount importance of ending the war and changing foreign policy, right up to the time he picked Biden, making it clear he was no longer to be seen as the anti-war candidate. (Note that Chris Hitchens ended up supporting him, commenting that O's anti-war supporters ought to feel betrayed by him -- quite true!)

I ended up with a slight preference for McCain winning, on the theory that divided government is our best hope (it worked very well in 1994-2000, after all, an era of peace and prosperity).

As to what causes this leader-worship, for the moment I can't add anything to what I say in the post -- it involves exactly the same sort of elevated hope and meaning that we find in religious experience. Of course, that raises the question, "fine, but what causes that"? I'm not sure -- maybe I should reread Hoffer's The True Believer, which is about this very thing.

What worries me is that, while obviously many of the Obamatrons don't support him because of his anticipated policies, they're likely to end up putting blind faith in his policies merely because they are his.

And might I add that it's been kind of eerie walking around these last few days and every third or fourth person is wearing one of those T-shirts with that creepy portrait.

I think that is a different matter. I too misted up when I saw Jessie Jackson with tears streaming down his face. Crying Halleluja because a black is elected President makes perfect sense to me -- especially if you are black. But that's not the same thing as emoting as if he were a new Messiah. (Personally, I think it would be a better country and better world today if the first black President had been Colin Powell in 2000.)