As a number of people have pointed out, Hurricane Irene is the Apocalypse that wasn't. Indeed, this article suggests that a substantial number of people simply didn't believe the shrill warnings we got from the politicians and the press in the first place.

There was a boy tending the sheep who would continually go up to the embankment and shout, 'Help, there's a wolf!' The farmers would all come running only to find out that what the boy said was not true. Then one day there really was a wolf but when the boy shouted, they didn't believe him and no one came to his aid. The whole flock was eaten by the wolf. [Aesop's Fables. A new translation by Laura Gibbs. Oxford University Press (World's Classics): Oxford, 2002.]

Fear seems to be an abundant and inevitable product of the democratic state. I have commented earlier that this means that, if its leaders have their way, its citizens will live in a permanent state of being more or less scared out of their wits.

I now realize that there is also a down side if they don't have their way, and people just stop believing what they are told. There is a legitimate role for alarms and warnings, if they are overused they will cease to work.

Update: On the crying wolf theme, see the last paragraph of this.

On the Road Again 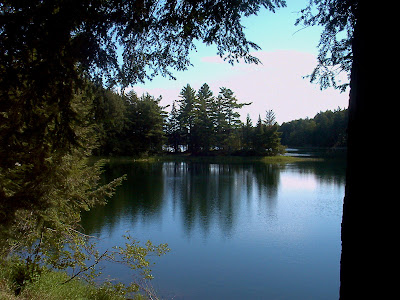 Deborah and I are on a camping trip in the Sylvania Wilderness Area, so I won't be posting for several about a week.

Sylvania is an interesting place from the point of view of welfare economics, as I point out here. I posted some pictures from an earlier visit here.

To the left here you see the view from our camp site. We have an entire bay to ourselves!

Our house is being guarded by our son Nat and a pack of attack-trained Shiba Inus.
Posted by Lester Hunt at 10:43 PM No comments:


Very funny -- and literally true. Except for the part where he says that Fox ought to like this guy. Nuh-uh. They know what they are doing. They're just bigger fans of perpetual war than you think.

Well, I expect to hear a lot of Obama-bashing tonight, and it was there already in the first two answers (Bachman and Romney).

Sad to see Gary Johnson again not allowed to participate. I've been following him on Twitter, and I noticed that he seemed depressed. "People will start to notice us," he said. That's not exactly rallying the troops.

Romney, asked if he would have vetoed the budget bill, seemed to dodge the question.

Ron Paul is talking too fast, as usual.

Pawlenty repeated his charge that Bachman's "record of accomplishment in Congress is non-existent." Apparently this means she hasn't written legislation that passed both houses. Isn't that an unfair criticism? The last five years have been bad ones for someone with her ideology to pass legislation. Her answer was that she has been leading the resistance, which seems like the right answer to me.

Chris Wallace asks Gingrich about his staff quitting on him and Gingrich, and Newt gets all huffy. The crowd seems to like it, but I didn't.

Cain: I am learning. Well, good, but Presidential OJT hasn't worked that well for us.

Someone once described Rick Santorum as having "a punchable face."

Romney just came out as a tenther! The feds only get to do what the Constitution says they can do. That's his main defense of Romneycare: this ought to be done by the states.

Pawlenty is taking swings at Romney and Bachman, both in the top three. Someone has been telling him to become Macho Man.

Ron Paul says that under the federal Constitution, the states have a right to do bad things (like force people to buy health insurance). True. Then Santorium goes berserk, saying that this means that they have the right to legalize polygamy and impose enforced sterilization. What a complete moron.

Quite a heated exchange between Santorum and Ron Paul on Iran policy! I'm with Paul on this one, as you may know.

Paul points out that Bachman's "no miranda rights for terrorists" involves convicting someone of being a terrorist without due process.

She also would do "anything" to prevent Iran from getting a nuke.

If you thought Afghanistan and Iraq were quagmires, just wait until we invad Iran, Michelle!

I could swear I just heard Santorum say Iran will destroy civilization as we know it. And people used to say the Ronster is the crazy one.

The audience keeps booing tough questions. Bachman has quoted the Bible saying wives should be subissive. Would she be submissive as pres? Her answer is that she interprets the Biblical notion of submissiveness as "respect."

Romney says marriage should be a federal issues. With a constitutional amendment banning gay marriage.

Paul takes a laissez-faire position on what marriage is. Good!

Now they're fighting about who is the most pro-life. So far, two are in favor of criminal sentences for doctors who perform abortions. Why not the woman? I've never understood that. If it's murder, isn't she at least as guilty as the doctor? The pro-life Weltanschauung is an impenetrable mystery to me.

Gingrich just took a more or less Paulian position on the Federal Reserve. Amazing how much more mainstream Paul is than he was four years ago. And he hasn't moved an inch!

I thought they were going to spend the who evening attacking Obama. No, they mixed it up with each other, plenty.
They are summarizing now. The last event I live-blogged was an hr. long Obama speech. It was excruciatingly boring. This 2-hr. event was much more interesting. Frightening at times, but interesting.

How this debate affected my opinion of the candidates:

The Mystery of the English Riots 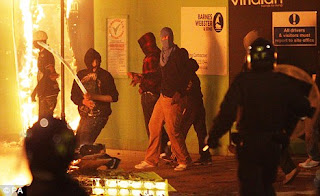 I've been struggling to understand the arson, looting, and senseless violence in England over that last four days. That sort of behavior is so alien to me that this is like understanding beings from another planet. This article, though tainted by the shortcomings of the author's Tory priorities, seemed helpful to me. He says, in effect, these people are not from another planet, they are from the future. The may or may or may not be from your future. For sure they are out of a futuristic novel and movie call A Clockwork Orange. Say hello to Alex and his droogies!

The idea is that the system, one of the wealthiest welfare states on Earth, has created a large underclass of young people with no marketable skills and little or no interest in being productively employed, kept in useless idleness on the dole.

The distinguished political philosopher John Rawls claimed that if we arrange social institutions so that inequalities are in the interest of the least well-off people this will boost their self-esteem because it will show that we care about and value then. He never went into just what institutions fill this bill (with commendable humility, he figured he is not qualified to do this, not being an economist) but it seems to me that for this particular point, he would have to accept as an example of such a system getting a monthly check in the mail of money taken from the most well-off people. The stuff the system gives them, just for being the worst-off brings a convincing message: you are good.

No it doesn't. The message it carries is more like: "So sorry you can't seem to fend for yourself! Well, here's some stuff produced by people who, unlike you, can fend for themselves. Hope things start lookin' up for you! Cheers!" How self-esteem-boosting is that?

Rawls was a brilliant man, but he was a rotten psychologist. Much better were Dostoyevsky (in Notes from the Underground), Nietzche, and Erich Hoffer. These people would tell you that people don't get a sense of dignity and self-worth by being paid for nothing. They get it from a sense of efficacy (that is, power), and this can only come from their own action. And if for some reason they can't or won't act constructively, then they will act destructively, if only to prove that they are still human beings and have to be taken seriously.
_______________________________
Update: For an interpretation similar to the above-linked article (but in the leftist Guardian) see this. 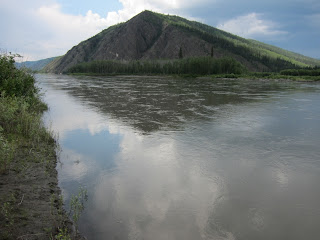 I'm driving to River Falls, WI to visit my good friend and fellow Nietzsche scholar Imtiaz Moosa, who teaches at the UW campus there.

Here is a web account of a recent trip Imtiaz (who happens to be blind) paddling 700 k. of the Yukon River with entrepreneur/adventurer Howard Fairbank. Imtiaz doesn't get internet in his house (one of several eccentricities) so I may not be posting for a while. See ya!
Posted by Lester Hunt at 9:02 AM No comments:

Labels: travel
Newer Posts Older Posts Home
Subscribe to: Posts (Atom)
"E pur si muove!": "Any yet it does move!" It was said to have been muttered by Galileo Galilei after the Roman Inquisition forced him to deny that the Earth moves around the Sun.