The Biggest Political Question of All Right Now 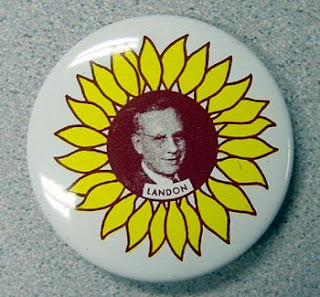 The other day I made a comment on what the Republicans should do that was of course more or less a wish-fulfilling fantasy: I would give my eye-teeth to see them split into two parties. If they did, classical liberals would be represented by our system once again, for the first time since the pre-progressive-era Democratic party.

Steve Chapman at Reason has a far more realistic take:

The best advice for the GOP is simple: Don't be at the helm when the economy hits the rocks. There is no better way for an incumbent party to assure its defeat than a recession. Richard Nixon proved that in 1960, Jimmy Carter confirmed it in 1980 and George H.W. Bush removed all doubt in 1992.

A corollary and equally obvious piece of wisdom is one the party learned in 2006 when Democrats swept the congressional elections: Don't preside over unsuccessful wars. The progress that followed the surge in Iraq largely solved that problem. But instead of becoming a Republican asset, Iraq became a political irrelevancy.

What the Republicans should do, he thinks, is mainly to be patient and hope they'll get lucky. No real need to change anything. It worked for the Democrats, didn't it?

This raises what is surely the biggest political question of the moment, the one we are all waiting to see answered. Will the Demos avoid breaking rule number one?

Consider this sequence of events, which began in the twenties: 1) a housing boom (probably credit-driven) goes bust, 2) a stock market boom (probably same source) also collapses, 3) a Republican president is at the helm as the economy hits the rocks, 4) the democrats come into power and pretty much do whatever they want for decades.

So far, we have gone through 1 through 3 all over again. Will we now repeat 4? It's a matter of timing, if Chapman is right. We now know that the Great Depression bottomed out during the last year of Hoover's term. FDR had the good luck of presiding over the recovery. Is that going to happen again? Are things about to get better? I doubt it. All the signs are that things are going to get worse before they get better. In fact, if the new administration carries out its threat to continue to bail out the profligate, the foolish, and the larcenous at the expense of the wise, the thrifty, and the responsible, they could get much worse -- just as they did in 1930 when the government did the same thing. If things do get much worse, the Democrats have just bought themselves a mess of trouble.

(Come to think of it, since I am not an economist and have nothing to lose by being wrong, I'll just come out and predict that things are about to get much worse.)

By the way, FDR also presided over the1937 Depression Within the Depression. This one was nearly as deep as that of 1929-33, with unemployment topping 20 per cent again, and was obviously and completely the fault of the Democrats. Did the voters smack them around for it? Actually, they did. In the elections of 1938, the Republicans gained six Senate seats and 81 in the House. However, all was forgiven in the elections of 1940. The Demos made slight gains in Congress and the Robber in Chief got an unprecedented third term. Timing is all.
Posted by Lester Hunt at 9:07 AM