Here is a graph worth a thousand words, provided by Prof. Mark Perry of the University of Michigan at Flint. 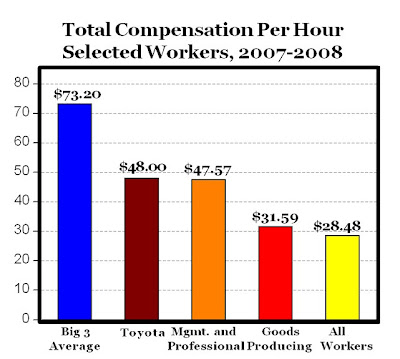 Beginning with legislation passed in the New Deal, some labor unions acquired massive economic power in this country. For a long time, as far as the American consumer was concerned, the American auto industry was the auto industry. They bought American cars, and didn't take foreign cars seriously as an alternative. Staggering amounts of wealth went to the American auto industry in exchange for their cars. The United Auto Workers used their industry-wide monopoly to suck in a large share of this loot, eventually becoming an unreasonably large portion of the cost of an American car. Now all of that is changed. Americans like Toyotas. They are no longer thrilled with Fords and they don't seem to want Chevys at all. Now big three auto workers have to compete with Toyota auto workers, and their product is not worth, to the consumers, what it costs them. The hayride is over.

... or mabe not. They want Americans, as taxpayers, to pay for something that they no longer wish, as consumers, to pay for: the huge wages of the American auto workers. And Obama, being a Democrat and deeply obliged to Big Labor, is determined to give them what they want.

By the way, because "there have to be strings attached," he will then tell them what kind of cars to make. I hope you'll like driving your imitation-Volvo hybrid.
Posted by Lester Hunt at 4:30 PM

whats wrong with an imitation volvo-hybrid? I kind of like the idea :)

I just looked it up and by George you're right!

What I find horrifying, in addition to the bailiout, is the idea of Washington "helping" Detroit design their cars. That system was pioneered by Mussolini and Hitler.