The Lesser of Two Evils is Still Evil 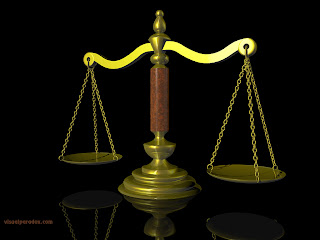 Some libertarians and conservatives have endorsed Obama, giving as their reason that, bad as he is, at least he's not the other guy. Others have endorsed McCain for exactly the same reason. (A rather curious example is Anne Applebaum's, which might be called an endorsement of not-McCain.) Of two candidates who admittedly will commit unjust actions, which is the lesser of the two evils?

Does it make sense to choose the lesser of two evils?* Ryan McMacken, writing on the LewRockwell blog, poses the question this way:
You have been captured by a band of criminals. In a room stands you, two criminals, and 11 children. Criminal A hands you a gun and tells you to shoot one of the children in the head or the other 10 will be murdered by criminal B who has a machine gun. [Suppose there is some reason you can't shoot the criminals -- which of course would obviously be the optimal choice.] What do you do?

Faced with such a choice of two evils, he says, the proper response is to say, "I chose neither. I will not cooperate in committing evil." Speaking from a Catholic perspective, he gives three reasons for this position, which I reproduce here with my comments and emendations:

1. 10 children are not worth more than 1 child. Each human person is infinitely valuable, and for you to cooperate in the murder of one of them, no matter what your motivation, is to be a murderer, and no less a murderer than the one who murders 10. Humans cannot be reduced to math equations in Christian morality.

2. If criminal B proceeds to murder 10 children, you are not morally culpable. The murderers are the criminals, not you. You have a responsibility to not damn yourself and to not cooperate in evil.

3. You cannot predict the future [with certainty -- not, at any rate, future human behavior]. You don't know that if you shoot the one child that the criminals will keep their words and spare the children. It could be that you will all be murdered no matter what, and all that you have accomplished is to become a murderer yourself. You also don't know that if you spare the one, that the criminals won't spare all of you for some other reason.

The only point here that I would want to amend in some major way is (1), which rests on the idea that all persons have "infinite value." I admit that this notion does make my heart beat faster, but I could never in good conscience say that it is true, for the simple reason that I can't coherently explain what sort of "value" this is. Nor have I ever seen anyone else give a coherent explanation of it. Obviously, it doesn't refer to the person's contribution to the economy -- ie., the value involved is not market value. Nor does it consist in one's fitness for some job or position or role. Nor is it virtue or worthiness for admiration. What is it? I can't say, and so far as I know, neither can anyone else.

But I do have an alternative idea, one that amounts to the same thing in practice. It is that persons have rights, and that these rights are moral constraints on your behavior. Constraints do have exceptions, but where no exceptions apply, you may not infringe them.

What you do not do is the count the number of violations and minimize them. Numbers don't count. Quantitative considerations do not apply here. That is part of the difference between a constraint and concepts like "value." What you do with value is you maximize it. With a constraint what you do is you don't violate it. In practice, this means acting as if ten children are not worth more than one.
__________________________________
* The following discussion, I should admit, is only relevant to voting if we assume that voting for doing A rather than B has the same moral status (guilt or innocence, etc.) as choosing to do A rather than B. This of course can be denied.
Posted by Lester Hunt at 8:10 AM

I'm a Christian, and I don't quite get McMaken's belief that each child has "infinite value"; I don't know what that phrase means. I do, however, believe in rights (which spring from the Biblical moral code, and the fact that all are created in God's image), and so I end up agreeing with both McMaken and you, in rejecting the utilitarian premise that one must choose the "lesser" of two evils, esp. in the example cited, and situations of that nature (which happen quite rarely, mercifully, in real life).