What Should the Republicans Do? 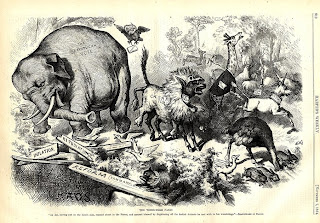 Jonah Goldberg has a rather interesting piece arguing against the idea that the Repubs can expand their appeal by moving in the direction of being economically conservative but socially liberal. Perhaps he is prompted by a much more ambitious, thoughtful, and interesting essay in which P. J. O'Rourke argues, at times eloquently, that this is just what they should do.

His main argument is that people who actually are economically conservative and socially liberal are “jackalopes of American politics": extremely difficult to find.

Actually, as Goldberg never once mentions, these people are called libertarians. And they do exist. According to an article that I cite frequently, studies variously show that ten to twenty percent of voters describe themselves this way.

Goldberg could have made his point better and more honestly if he had pointed out that, even if all these people vote Republican, which of course they don't, they would still be a minority of those who do. And he does have a powerful point when he says that the Republican party could not possibly survive without the voters who are socially conservative but also support (though often very weakly) something like a free market.

What Goldberg is probably thinking of when he says that people who are socially liberal and economically conservative are extremely rare is no doubt that elected politicians who come anywhere close to fitting this profile are extremely rare. Is that true? Let's see. There's Christine Todd Whitman, William Weld, Jesse Ventura, Arnold Schwarzenegger. I'm running out of names here, and even they are far from perfect examples.*

In other words, a sizable portion of the population, ten to twenty per cent, and by no means the least educated or qualified or the least politically engaged, is almost completely unrepresented by the political system in this country. This seems to me to be an obvious injustice, and I don't think it is just because I happen to be one of the victims.

Ideally, I wish the Republican party would just break up into two parties: We could call them by their correct, traditional names: the Conservative Party, and the Liberal Party. It is the only way I could ever see a major party candidate for President with whom I more or less agree on most issues. (Just think, that's an experience my 90% Democratic colleagues at the university have every four years! Me, never!)

I don't think it is entirely inconceivable that this will happen. One of the many bad things that G. W. Bush has effected in this country is the new divisions within his party. These groups have never liked or respected each other very much, and they may be less inclined to cooperate today than ever before. Republicans who were never pro-war are really, seriously angry at those who were.

The breakup of the party might also might be desirable for the Republicans themselves. Once they were free to be themselves, without the need to appeal to people with whom they disagree on fundamental issues, these two groups of people could then attract blue dog Democrats and independents who do not currently feel represented by the system, and grow. At that point, things could get very interesting. Anyway, that is my utopian fantasy.
___________________________
* Goldberg's intended argument might be something like this: There are no elected officials who fit this profile, therefore no one does, even though for some unexplained reason some people do describe themselves this way on surveys. But I say there is an obvious reason why there could be a virtual absence of sitting politicians who are like this though there are plenty of voters with corresponding views: the two-party system locks them out.

It seems to me that a winner-take-all system like ours more or less inevitably leads to there being only two major competitive parties. Any time a third party starts to make inroads, one or both of the major parties adopts enough of the platform of the third party to appeal to the third party's supporters and thus give that major party the victory. Thus we have two major parties that are composed of various factions which, I am guessing, in a parliamentary system would never band together into a single party.

You're right that the Republican conservative and liberal wings don't have much in common with each other. But the Demos are even more fractured. Blacks, Hispanics, gays, feminists, progressives, labor unions - what do these groups have in common except opposition to straight white male businessmen?

For the Republicans to split into two parties would mean the end of their competitiveness. Neither faction would win an election in any time in the foreseeable future. So it's not going to happen. But I'm guessing you wouldn't argue with that...you're just expressing a fantasy you have of being able to vote for someone you completely support.

Funny thing is that probably almost no one will have that in the future as the country becomes progressively more balkanized. My guess is that we will eventually learn the hard way that a democracy is a fine way to run a homogenous nation whose inhabitants identify with one another as basically brothers, sisters, and cousins and thus basically have one another's interests at heart. It's a suicidal way to run a country that is balkanized by race, language, culture, and to some degree religion. It becomes a fierce and probably corrupt competition to hold political power as a matter of survival for ones own group.