Thanksgiving: Celebration or Mourning? Why Not Both? 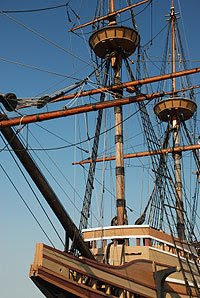 I like Thanksgiving, mainly because it is a heck of a tough culinary challenge, but not everyone does. Holidays are symbols, and symbols inevitably mean different things to different people. To most whites, it is a celebration of a peaceful gathering of American Indians and some of the first European settlers on these shores. Many Indians, though, are very aware that the real history of the relations between the Europeans and the natives was anything but peaceful.

This results in a wide spectrum of behaviors ranging from angry articles attacking the holiday and the eloquent and bitter speech Wamsutta (Frank B.) James was to have given at the first annual celebration of the Plymouth Rock landing in 1970 ... all the way to demonstrations that disrupt parades and other celebratory events and even, on occasion, lead to violence.

In the same category I place the years of moralistic bullying that effectively ended the celebration of Columbus Day in this country.*

I think all of this is morally wrong, including, believe it or not, the writing and publishing of angry essays.

Well, think about it. Why would someone angrily attack someone else's holiday? I know, they'd say, "Well, what if someone were celebrating the Holocaust, you'd be pretty angry about that, wouldn't you?" Of course, but what is going on here is nothing like that at all. These people aren't celebrating genocidal warfare against Indians. Everyone knows that European-Indian relations had both negative aspects and positive aspects. They are celebrating the positive aspects. Others would rather commemorate the negative ones.

What the angry protesters are trying to do is to put an end to the celebratory thoughts and feelings of others. It is an attempt to violate the individuality of another person and to control their inner being, an impulse that is totalitarian at heart. They hate it that others are celebrating when they themselves prefer to mourn, and they want to put an end to it.

Native American radicals should tell their story to everyone who will listen. They should also develop their own commemorations and celebrations. The Wampanoag Indians who held a ceremony in which they buried Plymouth Rock might be an example, and the ceremony of mourning that is now held annually on Cole's Hill, overlooking Plymouth Rock, may be another, provided in both cases that these activities do not interfere celebrations going on nearby. Activists should develop their own counter-holidays and anti-holidays. But they should stop raining on my parade.
___________________________________
* But not the part-Seneca mother who more or less ended the traditional Thanksgiving celebration at her daughter's kindergarten by complaining about kids dressing as Indians. Here the issue is complicated by the fact that, as this is a public school, she is being forced by taxation to support something she finds morally offensive.

While we're on the subject of holiday killjoys, here is a greeting from William Burroughs (hat-tip to Jesse Walker at Reason Hit & Run):

That's the holiday spirit! One of 'em anyway.