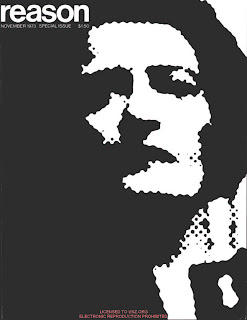 Here is a very interesting article in Reason Magazine, which undoubtedly is the best known libertarian publication. They asked various people who have appeared in their pages some questions about how they plan to vote this time around and these are their answers. They are often very interesting indeed.

These are the bottom line results for each:

Which I add up thus:

I find this fascinating for several reasons. I've been connected with Reason in various ways since I helped Marilyn Walther Machan assemble and staple pages fresh from the printer for an issue circa 1971. In those days, it looked home-made (see above) -- and it was! I also wrote for it long before it was fashionable to do so.

But there is also a non-egocentric reason to find this interesting -- Obama wins! Even if you subtract the three authors who are obviously not libertarians (Newmark, Sirius, and Pinker) he still ties with the Libertarian candidate. The reason for this is very clear in the answers almost half of the libertarian writers give. These people want to see the Republicans punished, punished painfully, publicly, humiliatingly. And then punished some more.

As Boaz and Kirby point out, studies find that between 10 and 20 per cent of voters are neither liberal nor conservative but libertarian, where this means "tending to agree with conservatives on economic issues and with liberals on personal freedom." By the standards of these voters, the Bush administration has clearly been very bad. If you add that most libertarians favor a military policy that is limited to national self-defense against imminent attack, the picture becomes many, many times worse. For these voters (and I speak as one of them) six years of united Republican rule was pure screaming horror. 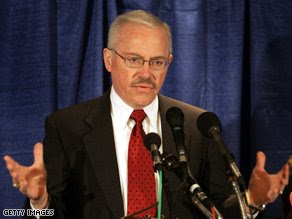 As for me, I've already given my endorsement. I would like to add that, though rage against the Republican machine is perfectly understandable, I think voting on the basis of emotion alone is an irresponsible thing to do. My mother once told me that she voted for Governor Reagan because she loved his movies. Voting for one major party because you are mad at the other makes about as much rational sense as what Mom did.

Go mustaches! I think facial hair in presidential candidates has gotten a bad rap ever since the defeat of Thomas Dewey.

By the way, I completely agree with you here. I could make a case if the Republicans were in control of Congress. And granted, the Republicans should be taught the fear of God (metaphorically speaking), but that hardly implies that Obama is a better candidate than McCain or Barr. For the same candidate who received the endorsement of the Communist Party, USA, to get such strong support in the pages of a libertarian magazine (called "Reason", no less!) is sad, particularly when the reasons for that support are so ill-founded.

Also, what's forgotten there is that once created, new government programs are next to impossible to repeal or even roll back. Once the Republicans regroup and come back, it's unlikely they'll be able to pull that off, and even more likely that the "lesson" they'll learn is to be more like Democrat Lite. I suspect that this "lesson" was behind the very nomination of the maverick, bipartisan John McCain in the first place.

Yes, the Republicans, while they sit in the corner thinking about what they did, may well draw entirely the wrong conclusions. Note that they followed up eight awful years with a trigger-happy non-ideological "moderate" by nominating another candidate of exactly the same type. Will they ever learn? Also, as I am sure you have noticed, turning into Democrat Lite is exactly what they did during the last New Deal.

I'm probably voting for Barr (I live in MA) because Obama is likely to win. If I think it's close, I'll vote for McCain. The main reason is because he'll be a counter-posture (sort of) to an all-Dem Congress. If Obama wins, I'll bet there will be some huge cat fights among the Democrats - hope so, anything that keeps them from the grand socialist agenda for health care, young pioneers, nationalized financial institutions, etc. If Dems take enough seats to be filibuster-proof, Obama (if elected) could handily pick and place many judges in the Circuits - many positions will be available. That could have long-term consequences, beyond his four years. I'm not sure he's going to win, now - I was certain a week ago. I still think it's quite probable, of course. I can't place the source of my doubts, and I don't feel much emotion about the election -I'm SO sick of this campaigning and wish it were already over.

Wow, Lester, I didn't know you were a Founding Father of Reason! We've enjoyed reading it for many years now. Thanks for all the hard work - I think it's a rare piece of journalism that more people need to read. (I always leave our old copies in public places or hotel rooms.)

Ann, As to the founding of Reason, I can only claim that I was present. It was acquired in 1971 by three Santa Barbarans (Bob Poole, Tibor Machan, and Manny Klausner), all of whom I knew and one of whom was an old friend of mine.

This doen't surprise me at all.

I'm not sure how Reason was back in the old days, but it just plain sucks today. Maybe I'm just bitter at the lousy way in which the writers at Reason treated Ron Paul and his campaign, tearing him down and mocking his supporters every chance they had. If Paul explicitly came out in support for legalized marijuana and prostitution and bacon wrapped hot dogs, it's very much within the realm of possibility that the folks over at Reason would have been a little more receptive to his campaign.

Cody, I think you've summed up the situation very well.

In a funny sort of way, this may be good news. The libertarian movement -- not only in the academic realm and the field of journalism but among the voters as well -- is now large enough to consist of several very different factions, which have a certain tendency to hate each others' guts. In this way we now resemble the Democrats and the Republicans. We've come of age!

And fittingly, I believe it was Thomas Dewey who ran as an okay-with-the-New-Deal Republican. The only possible upside of Obama winning that I can see is this: I kept having the sense, during the Bush 43 administration, that had some of his proposals been made by a Democratic president, that Republican opposition to them would have been overwhelming. Opposing those policies would've united them under the small-government banner, as it did when Clinton made proposals that Republicans opposed. McCain could well go the way of Nixon and Bush 43, and enlarge the government with the full cooperation of the Democrats, and because he's a Republican, Republican opposition to those proposals would be gutted. So one MIGHT argue that an Obama presidency would make gathering opposition to bad policy proposals easier, at least in terms of unifying the opposition. I'm not saying I fully agree with this, mind you. To the extent that it may be true, I think that it's more the silver lining of an Obama presidency, not a reason to vote for one.