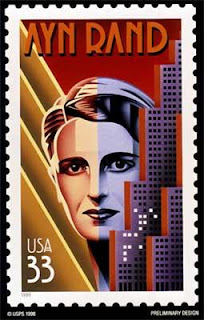 A commenter points out that Bill Moyers has said that Allan Greenspan's contribution to the recent crash and the coming depression/recession can be blamed on the fact that he was once an friend and follower of Ayn Rand.

This is almost the exact opposite of the truth. Greenspan's conduct as Fed Chair was a betrayal of his earlier expressed views, a betrayal that libertarians and Randians have complained about many, many times over the decades.

The truth has been explained very by Richard Spencer here. In the early sixties, Greenspan wrote an excellent essay, believe it or not, defending the gold standard, on the grounds that it would prevent precisely those policies that he did pursue years later, after he had become our monetary dictator.

In that essay, he criticized a fateful move on the part of the Fed in 1927, when it decided

to assist Great Britain, who had been losing gold to us because the Bank of England refused to allow interest rates to rise when market forces dictated (it was politically unpalatable). The reasoning of the authorities involved was as follows: if the Federal Reserve pumped excessive paper reserves into American banks, interest rates in the United States would fall to a level comparable with those in Great Britain; this would act to stop Britain’s gold loss and avoid the political embarrassment of having to raise interest rates.

The ‘Fed’ succeeded; it stopped the gold loss, but it nearly destroyed the economies of the world in the process. The excess credit which the Fed pumped into the economy spilled over into the stock market—triggering a fantastic speculative boom. Belatedly, Federal Reserve officials attempted to sop up the excess reserves and finally succeeded in braking the boom. But it was too late: by 1929 the speculative imbalances had become so overwhelming that the attempt precipitated a sharp retrenching and a consequent demoralizing of business confidence. As a result, the American economy collapsed.


Greenspan's essay is still in print and still well worth reading.

What I find seriously spooky about it is that in it he is quite explicitly saying that policies substantially similar to the ones he later enacted eventually lead to speculative booms, crashes, and depressions. As Spencer points out, after Fed interest rates reached an all-time high of 19 % under Greenspan's predecessor, he eventually hammered them down to as low as 1 %. This is just the sort of speculation-triggering inflationism he warned about back when he was a Randian. Of course he was right the first time. These policies have indeed lead to disaster, and will continue to do so.

Moyers' comments are one more example of the often-repeated myth that these events were caused by laissez-faire caplitalism, whereas they were caused by government intervention. In fact, critics of interventionism predicted it would do so, including even the Arch Intervener himself, in a earlier lifetime.

(Notice that the people who were suprised when the catastrophe struck were proponents of intervention, like Ben Stein and Paul Krugman. We on the other side had been warning it was coming for a while now, and were in large part well prepared for it.)

The story of Allan Greenspan is a very sad one and a very old one. Once upon a time he believed in freedom and the market, and in the principle that working and saving are virtues. Then one day Ronald Reagan offered him absolute power over the US money supply, and it corrupted him. He went over to the great Keynesian transvaluation, in which working and saving are less virtuous than consuming and spending.

As Ellsworth Toohey, villain of The Fountainhead, says to one of his victims, "Ever read Faust, Peter?" Political power is indeed a deal with the Devil.
____________________________________________
Added Later: On related themes see Harvard (!?) economist Jeffrey Miron. Also see the always-excellent George Reisman. Also check out this audio of Ron Paul commenting on the Greenspan betrayal. Finally, my friend the estimable Richard Epstein has weighed in.
Posted by Lester Hunt at 10:17 AM

Alot of Liberals resent Rand because she believed in a rule of the elite and talented. Ironically when the feds tried to break down class division with the altruistic notion of home ownership for everyone, the results were disastarous.

Galbraith's analysis was that the corporations and special interest essentially took over the "gov't regulatory" mechanism to enhance profits so their own corruption spoiled the system. In other words these entreprenaurs were not interested in building industries to advance wealth but were rather manipulating the system for corrupted self-interest.


Rand is vindicated both by the altruism argument and the failure to follow values on the second argument.

In defense of Moyers and Greenspan, Alan's mention of "self-interest" in his mea culpa was a subliminal echo from his previous beliefs which triggered the Rand comments from Moyers. I'll bet Moyers is also one of those Limousine Liberals who enjoyed watching his investment portfolio rising during the past few years.

As you may know, there is a field in public choice called "capture theory," which explains the behavior of regulatory agencies on the hypothesis that they have been captured by the very people they are supposed to regulate. This transforms a regulated system to an oligopoly.

I think that is one of the reasons Rand was for a complete separation of business and state, "like the separation between church and state."

This was Greenspan's Galileo moment. Yet when haled before the tribunal, he had no principles left to stand on, so he could not even whisper "e pur si muove". Ayn Rand must be spinning in her grave.

"Capture Theory" or in Greenspan's case it was "Stockholm Syndrome".

He was not just a captive to the markets but also GW/Cheney/Rumsfeld/etc's Empire Policies and the need to finance it with a "growing" economy.

This is what Ron Paul, Ralph Nader, Dennis Kucinich, Chalmers Johnson ("Sorrows of Empire') and countless others talk about.

That is a very good point. Most discussions of the state assume that states and bureaus thereof (eg., the Fed) have no interests of their own, but are simply the tools of other interests, generally either the people ("democracy") or the dominant economic interests (eg., Marxism). Of course those other interests have a hand in it, but the state does have its own interests too.