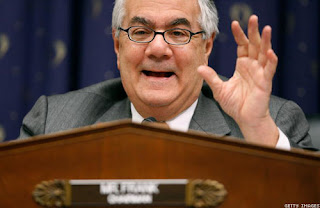 Supposing you can bring yourself to vote for either wing of the two-party duopoly, which side should it be? My answer: vote for divided government and pray for gridlock.

I just saw a news item that I think is very relevant here. Congress is beginning the first of its hearings on the causes of the current crisis. It will be headed by Barney Frank. Yes, the Barney Frank who is probably as responsible for this crisis as any other person in government, with the probable exception of Ben Bernanke. In a just world, Frank and Chris Dodd would be crawling under a rock right now, leaving glistening trails of slime behind them. Instead, Frank will be officially in charge of proving it was all the fault of someone else.

He also made an interesting statement on TV. What the country needs right now, and what he intends to give us, is even more deficit spending than we have already got. Later on, when we are ready to raise taxes, there are "plenty of rich people out there" that we can tax to pay for the huge deficits he is planning. (By the way, note that, as Stephen Moore has pointed out, the wealthiest 1 percent of the population earn 19 percent of the income but already pay 37 percent of the Federal income tax. The top 10 percent pay 68 percent. Meanwhile, the bottom 50 percent now earn 13 percent of the income but pay only 3 percent of the taxes.)

Obviously, Frank's words are not election rhetoric. The election won't be held for another two weeks, and the Demos are already talking as if they have won the goal they covet: the Presidency and filibuster-proof super-majorities in both houses of Congress.

As far as I can tell, this has only happened twice in history.

The first gave us Woodrow Wilson's ironically named "New Freedom," which brought massive "reforms" such as graduated income tax, the Federal Trade Commission, the Clayton Antitrust Act, popular election of U.S. senators, and most important of all, the Federal Reserve Act, which created a European-style central bank, a move that the Jacksonian Democrats had earlier fought tooth and nail. Like many others, I have argued that this bank was an unregulated eight hundred pound gorilla that contributed mightily to the present economic crisis.

These were the two biggest peacetime moves toward bigger and more powerful government in the US since the ratification of the Constitution.

Now, at this point you may be thinking, "Well, fine, we need more government today, to reign in the greedy people in the private sector who caused this economic crisis!" If you think that you are, first of all, horribly and dangerously wrong. But consider, aside from that, what else these two Democratic trifectas brought us. The first brought US entry into World War I, withWilson throwing critics of the war into prison. With the second, FDR almost got away with "packing" the Supreme Court, which he attempted because he didn't like the way they were providing a check on legislative and executive power. To save their jobs, the Court radically shifted their position to please the President. Thus the largest earthquake in twentieth century constitutional law was forced by threats from the executive branch of government.

By any sane standard, these were the two worst moments for liberty and the rule of law in this country since the Civil War. Divided government always has certain benefits, and super-unified government, virtual one-party rule, is bad for everyone in the long run.

That is why everyone who votes for either of the two major parties should hold their noses and vote for the Republicans in this Presidential election.