Proof that the Bailout Was a Swindle 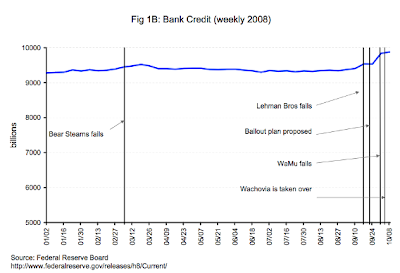 Today (Wednesday) a paper was released from three economists at the Minneapolis Fed that ought to have everyone hopping mad. It appears to show conclusively that four statements that were made to justify the recent massive Wall Street bailout are, quite simply, false:

1. Bank lending to non-financial corporations and individuals has declined sharply.

4. Banks play a large role in channeling funds from savers to borrowers.

This is the measure that the Republican administration proposed and the Democrats in the Congress enthusiastically made their own -- the one supported by both McCain and Obama.

It looks like we have been played for suckers, to the tune of over a trillion bucks. What really gets me is that all four of these claims were repeatedly made during the awful week in which our masters were screaming at us to accept this thing -- and never a shred of evidence, that I ever saw, was ever offered for any of them. Why did we fall for it?*

By the way, do you think they are going to give us our trillion back? Will they back off from nationalizing banks? Well sure, just like Bush called off the war when the WMDs failed to materialize.
______________________________________
* Etienne de la Boetie wrote a book about it: Discourse on Voluntary Servitude: "I should like merely to understand how it happens that so many men, so many villages, so many cities, so many nations, sometimes suffer under a single tyrant who has no other power than the power they give him; who is able to harm them only to the extent to which they have the willingness to bear with him; who could do them absolutely no injury unless they preferred to put up with him rather than contradict him?"
Posted by Lester Hunt at 10:10 PM

Government is theft. The best we can do right now is to try and contain it, I guess. Easier said than done, though.

I prefer to say "The state is an extraction device," it sounds so much nicer.