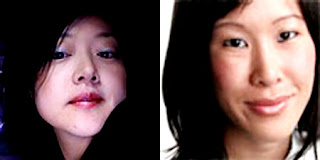 Okay, I'm not saying we should carve him on Mt. Rushmore, but eight years of peace and prosperity are pretty hard to argue with.

After the disastrous two who followed him, those years are looking like a golden age. And he, equally with the Republican-dominated congress with which he was forced to share rule, deserves some of the credit.

When he lied, it was mainly about sex, and not about whether we know that Saddam has WMDs, or whether he is engineering a government takeover of the medical industry.

Now, I see that he is starting to make himself useful again. It's so much like Bill to go half-way round the world to bring back two attractive women. We miss ya Bill! [Blows him a kiss:] Mmmwah!
Posted by Lester Hunt at 1:10 PM

Bill looked good while he was in office in the same way that someone who pulls an all-nighter looks productive before they pass out. What he was really good at was doing things with obvious benefits and hidden costs. We're still paying for his expansion of the Community Reinvestment Act (which the Cato Institute predicted 14 years ago would lead to a credit crunch) and his ignoring the problem of terrorism. The Clinton administration's prosperity was an artificial boom as was the peace seen in those 8 years. Golden years, maybe, but gilded.

Fair enough, but even then Bill was better than those other two disasters, IMO.