Confusing Signals from the White House 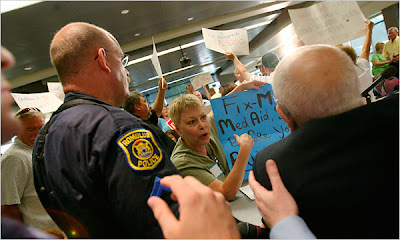 As I write this on Sunday, the Administration has suggested that it will no longer insist on a "public option" in the health care reform bill.

If that is true, this would be the second time the people have effectively voiced their dissatisfaction with what government is doing since their voice was brazenly ignored in October over the TARP bill. (The first time they did so, of course, was when they spanked the Republicans in November for seven years of neocon insanity.) This would be by far the greater victory for democracy, in that it isn't just a matter of counting votes -- the pols actually had to listen, for once.

As I write, the American left has just begun to respond. The sound is making dogs howl and scratch their ears all over America. They are already saying that this would merely be a victory, not for the people (who have always hankered to be ruled by the left), but for the powerful insurance companies. They are ignoring the enormous corporate presence that was lined up in support of the bill. This would be a defeat for them.*

I'm about to leave for South Dakota, and recently wrote a couple more posts about medical care, to be published while I am gone. I think they still have interest, if they don't necessarily apply any longer to this particular bill.
______________________________________-
* Here is a response to the corporate ads in favor of the bill that have assaulted my eyes daily for a while: