Another Reason for Government Rationing of Medical Care (According to Singer) 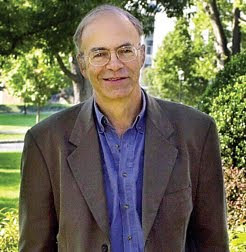 In the article I blogged about the other day, Peter Singer gives an interesting argument to the conclusion that (to put it one way) Sarah Palin's grandmother and son ought to be discriminated against in a nationalized medical system.

Here is how it goes. First, he asks you to imagine having to make a certain sort of choice about your own life. Speaking of ways we might compare the value of different allocations of medical resources, he says:

From this this thought-experiment about choices you would make for yourself he draws a conclusion about how we ought to treat other people. He puts it in terms of the specific issue he was just talking about like this:

If that judgment represents a rough average across the population, we might conclude that restoring to nondisabled life two people who would otherwise be quadriplegics is equivalent in value to saving the life of one person, provided the life expectancies of all involved are similar.

More generally, the idea seems to be that our social calculations should be based on the idea that one more year of life for a quadriplegic has half the value of one more year for a non-quadriplegic (other things being equal). We should assume that for purposes of distributing medical care, it takes two quadriplegics to equal one healthy non-quadriplegic. Such a system discriminates against the disabled and, for similar reasons, against the old. What is wrong with his reasoning, if anything?

Something about it really bothers me -- not the conclusion, but the reasoning itself -- but I don’t think I have completely figured out what.

One point that is relevant is made by philosopher Tom Regan in another context. Singer's way of thinking reasons from the fact that I can enjoy twice the value that you can enjoy, to the conclusion that in our social calculations my life has twice the value that you have. It views humans as receptacles of value, but does not view them as having value in any other sense. We should respect the value people consume, but not the value that they are. That is how Singer is thinking. On the other hand, if you think that humans have value in and of themselves (if you believe in what Kant called “human dignity”) that gets in the way of sacrificing one person for the sake of another, which is what Singer (as I interpret him) advocates. So you can admit his premise but deny his conclusion.

Another thing that can block the inference that Singer makes is the particular way one might understand the first of these two sorts of value: the value that we consume. If I decide whether I would prefer ten years as a quadriplegic to four years of non-disabled life, I am judging what has the greatest value for me, or to me. Well, what if we all, quadriplegics included, preferred experiencing non-quadriplegic to quadriplegic life at Singer’s fanciful rate of two to one? Couldn’t quadriplegics still consistently deny that other people’s interests should be preferred over theirs at that same rate?

I think it is obvious that they can, though it is not so easy to say exactly why. It seems to have to do, though, with the fact that the two judgements are about profoundly different things. Thoreau would say the first is about expediency, and the second is about right and wrong.
Posted by Lester Hunt at 11:48 AM

questions like these are interesting and, likely, unavoidable under any system, but I, personally, am annoyed at those who use them as a means of somehow showing the inherent weaknesses of universal healthcare by transporting the discussion to the moral rather than economic sphere, when, if they were sincere, even in that sphere, they would note that these quandaries exist yet, at the same time, note how choices made with the greater welfare of society in mind, though made with whatever imperfect logic, are preferable to claims' adjusters' choices in favor only of company profit, that would seem an enormous moral axiom of sorts

Anonymous uses the phrase 'the greater welfare of society in mind' Who gets to decide what that greater welfare is, how do we all recognize it when we have achieved it? Does the central government get to decree it? Why is that morally a good thing? Mussolini's writings are full of pronouncements of the importance and nobility of the individual serving the state. He seems to imply a sort of utilitarianism, and again, who gets to do the math on the 'greater good' calculations? I wish health insurance companies could truly be run in a free market - I am confident consumers would get lower prices - the currently regulated state-by-state companies with their mandates are about as free market as Fannie Mae. LOL. Why not empower the health care consumer more by giving the tax breaks to individuals the same as employers now get? The government is not proposing anything to empower the citizenry, they are proposing choices to expand their own tax revenues and regulatory powers.

As to the economics of universal health care, here is a report on Maine's experiment with universal care, a policy with many similarities to what Obama is proposing.

The 'who gets to define that?' line is too obvious a riposte. The process of making, remaking, and continually challenging such definitions is why we have a judicial system, an amendable constitution, legal scholars, and moral philosophers. It's ALWAYS A PROCESS and an uncertain one at that. Capital meets its own ends and directs itself towards its own health and proliferation, why not at least put the responsibility in Man's hands for his own welfare, though he may be clumsy when he isn't brilliant or mediocre.

Interesting that Singer doesn't figure on the value of individuals as producers. That's an even creepier utilitarianism.

It's an intriguing theory that, if you polled a large enough sample, you could plot the statistical probability of a morally correct position. As a people, do we have a shared value higher than democracy? Do we believe in it absolutely?

Reason tells us that there is no absolute value to human life. Certainly, evaluations of human life go on in courts & boardrooms every day. They ponder everything that is ponderable about human life & fix a dollar amount.

Our current health policies are guided by 2 moral imperatives: a)health care is not a right. b)you can't just let someone die on an emergency-room floor. What this means is that the poorest people only get the most expensive (ER) medical attention & only then when it's at a critical stage. It's morally sound, but economically bizarre.

Sure. We'll never live in a Pareto-optimal world, but maybe we need to value that as a ideal.

I think Anonymous misses Ann's point. "Who gets to define that" does not mean "who gets to formulate the definition of the phrase, 'the greater good of society'?" Obviously, everyone does. Or no one. What it means is "who has the right to impose a definition on everyone else."

I am struck by the fact that you are willing to say, out loud, that businesses seek their own profit while government bureaus seek the good of society. As the Virginia school political economy ("public choice theory") has shown abundantly, that is simply not true. Governments and branches of governments are corporate bodies that are smaller than the society as a whole and they inevitably give preference to their own corporate interests. In the case of government, this generally means more power, a bigger budget, and (as a means to these ends) giving things, at the expense of others, to their needed supporters (esp. big business and big labor). They certainly do not consist of altruistic saints, as you seem to think.

I of course mean a system more theoretically perfect than possible, or extant, one guided not by considerations of capital as the inherent value but of people. That too can obviously go awry, but given that we all at least publicly espouse people as the only truly inherent value, why not err on the side of caution? I do no mean to say that bureaucracies or other such Randian bugbears are swell uses of people, labor, and government, that is not the case, but that, even if that, through some intellectual failing or some immanent necessity, required them, why not have them working (at least hypothetically) for the people and not for capital? It's not as if simply switching out our HMO-insurance bureaucratic tangle for a govt ones would necessarily be worse. If anything, given one single, overarching system, things could be streamlined and standardized better.

Anon, what does it mean that 'people' are the only truly inherent value? I can think of many things that have inherent value - knowledge of nature, for example. I would argue that we've created increasing value in our individual lives through capitalism, not through government regulations - human life has gone from brutish and short to multi-faceted and long. Speaking of 'the people' 'collective conscience' etc., to me is just a convenient linguistic shorthand for referencing an extremely dynamic and complicated set of interactions among individuals. But the drivers are the individuals and always will be, this is why I don't like any political policy or program that starts with the 'collective or the state' as its premise, rather than the inherent freedom of each individual as its premise. Do you think Medicare and Medicaid are streamlined? Why do you expect ObamaCare to be different as a government-run health service?