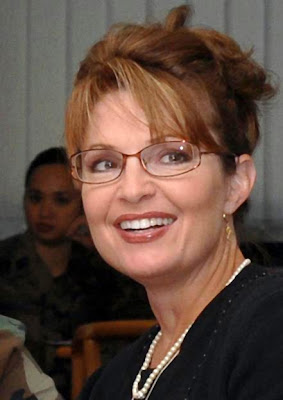 The following was written before the administration hinted it would stop insisting on a "public option" in the health care bill. I am now in South Dakota. Given that the idea of greatly expanded government provision of medical care is obviously not going away, I think the following still has interest, even if the hints are correct.

Last week Sarah Palin caused all kinds of upset when she said on Facebook:

"And who will suffer the most when they ration care?" She asked. "The sick, the elderly, and the disabled, of course. The America I know and love is not one in which my parents or my baby with Down Syndrome will have to stand in front of Obama’s 'death panel' so his bureaucrats can decide, based on a subjective judgment of their 'level of productivity in society,' whether they are worthy of health care. Such a system is downright evil."

This is hot-button rhetoric, but it did more to spark useful discussion than any one thing anyone else has said in this whole shallow, manipulated, spin-doctored debate. I think that the discussion soon became side-tracked, however.

It ended up with whoever is in charge of the mysterious "Senate bill" supposedly saying that payments for "end of life counseling" are out of the bill. End of discussion of that issue.

No, not end of discussion. Palin's comment was not about end of life counseling, it was about the broader issue of rationing. Now, to avoid sounding dense: Yes, I do see the connection between this counseling and rationing. If health insurance encourages these sessions (and why is "insurance" paying money for something that does not reduce risk to the insured?) more oldsters will think of alternatives to imposing heavy costs on loved ones (and taxpayers) with an endless series of surgeries with little promise of great benefits. Maybe you should just take a pain pill, or buy a nicer wheel chair. The saved money will then be spent on those who can get more out of it. The result would be a redistribution of death, to the old and ugly from the young and cool. That is one of the things that rationing does.

But it is not the only thing, nor is this the only reason to worry that this system would involve, or soon evolve into, rationing. Another reason is the well established mindset of those who push government health care.

You non-academics may not know this, but there is a sort of academic cottage industry called "medical ethics." The people in it often give seminars in which the sole question discussed is something like "which form of socialized medicine is the right one?" Yes, they are overwhelmingly for it, and they work without ceasing to impose their paper utopias on the rest of us. They are intensely dedicated, and absolutely convinced that their views are enlightened and sophisticated, and that those of us who disagree are a bunch of moral troglodytes.

A commonplace idea among them is that, once we have government health care, we should not indiscriminately give medical care to anyone who "needs" it. What is the point of government control, if we fail to organize the system more rationally than that? A term of art that is often used here is that of the QALY, or quality adjusted life year. This means that if we are thinking of investing money on a medical procedure for you, you lose points the older you are and the fewer years of life you will get out of the procedure, and you also lose points if the quality of the additional years is impaired somehow -- because you will be in pain, or are already missing a couple of limbs, or are retarded.

If the "experts" who have been pushing government health care for sixty years have their way, Sarah will basically be right. Both grandma and Trig will be in trouble.
Posted by Lester Hunt at 11:07 AM

All true. I still have sympathy for the "young and cool" because they are the ones who have not had subsidized health care up until now. Why should we spend a disproportionate amount of money on people who only have a few years of life left? Or on a child who will never be able to contribute to society?

Your questions only become real issues if and when insurance is paid for by taxation.

I find it interesting how much attention you pay to hypothetical death panels, yet none to the abusive tactics of private health insurance companies, which exist right now. Theys make their profits by limiting treatment, denying claims for established procedures by dubbing them experimental, and ultimately, resciding the contract/policy.

My mother, who had Medicare and a medi-gap policy to cover the 20% Medicare deductible, spent about two months in and out of hospitals, though mostly in, dying of renal failure and various ancillary conditions. In the end, she was on a respirator in a coma for about a week. My sister and I were in daily contact wih her doctors. Not one of them, nor any representative from Medicare brought up sugestions for terminating her treatment. I finally forced the decison to remove the suportive devices.

So much for death panels.

Last year, I had to have a broken hip joint prosthesis replaced. I am dsabled and therefore receive Medicare. I couldn't purchase a private policy if I wanted too, because of preconditions, even though they don't affect my lifespan. The entire cost of the deuctibles for the hospital stay and various physicians was only about $2,000, which I paid for with my sister's help.

No one from Medicare (or anyone else) suggested that I shouldn't have the surgery because I'm unemployed and unproductive.

I doubt I would be so fortunate if I had a private insurance carrier, especially an HMO.

Obviously, I'm in favor of a single-payer health insurance system.

I'll let other folks explain the flaws in the current system, which I am by no means defending. I am only saying that Obamacare would be worse, and "single payer" even worse.

Death panels are by no means hypothetical. The British NICE performs that function -- though not, as in Palin's overdramatic image, by sitting in judgment of individuals. It does it by laying down general rules about groups.

It is well-known that Medicare and Medicaid don't work that way, which is one reason why there are so many olders in those town hall "mobs." Obamacare would apparently shift resources from that system to the controversial "public option."

Why it doesn't work that way is an interesting question, to which I don't yet have an answer.

Whether we wish to admit it or not "Death Panels" have been around forever. Part of a physicians skill and bedside manner is to assist patients and families in end of life situations. As one elderly man once said; "Don't go in the hospital because you'll never come out." The prospect of single payer simply exposes this to a public level so it all seems sinister.

My own dad was in great health except for two bad lungs from occupational experience. Giving 73 yr old retired construction workers lung transplants was not an accepted practice in 1988, so his fate was inevitable. If this had occurred with single payer, we would have called this Palin's death panel scenario.

If individuals could purchase private insurance across state lines (they cannot now) and the insurance companies were not regulated by state governments with mandates of what sorts of services must be provided by the in-state insurers, private insurance policies would be less expensive and there would be real free market competition that doesn't currently exist. Only employers get the tax break on buying policies right now - if individuals got a tax break and could carry their insurance from job to job, e.g., with a personal health savings account, I think many people would buy private insurance earlier in life, and the actual costs of health care would be more transparent to the consumers.

Concerning government - what incentive exists for any bureaucrat to treat any patient with consideration, efficiency and flexibility? I have never understood people's faith in the 'fairness' of government. 'obstinate apathy' seems a better characterization. Breach of contract? I am already receiving letters from the Social Security Administration giving me the heads-up that my earned benefits at retirement will likely be pared down due to financial strains on the system. What a surprise. The good news is that I have never believed social security would be there for me and have planned my financial future accordingly. If I enjoy comforts in later years I will give free markets most of the credit, the government almost none.

Your two paragraphs seem to be about two different things. The first one -- "part of a physicians skill and bedside manner is to assist patients and families in end of life situations" -- seems to be about counseling or assisted suicide. Neither is a form of rationing, unless a government is deliberately encouraging them in order to divert resources to others (as in, eg., a government "insurance" system specifically paying for these things).

The second paragraph is may or may not be an example of what I am attacking. All rational action requires and assessment as to whether the outcome of a course of action is worth the cost. Singer thinks that this requires us to sacrifices some individuals for the greater social good. I don't.

But to say that 77 is too old to get a lung transplant, no matter what else is true, seems wrong to me.

Reflecting on Lester's last remarks, it seems there is an enormous difference between a patient and a physician coming to an understanding about whether to do an operation or treatment, and having some panel of government czars decide the case. Specific physicians may strongly discourage a patient from undergoing a procedure, may refuse to perform it themselves even, based on factors such as fragility from age or existing disease. But a stubborn patient can seek other advice, and the big point is these decisions are made locally, one at a time between individuals. Personal health and medicine is surely one of the most complicated and idiosyncratic parts of life. Rationing will diminish personal choice in this area.

OT: I was sad to learn of the passing of Rose Friedman. From the perspective of an admiring stranger, she and Milton Friedman seemed to live a deeply meaningful life in all facets, intellectual and emotional. There was a pair who did not suffer tyrants (in fatigues or business suits) gladly.

I'm sorry to hear that Rose had died. I never met her, but she and Milton seemed to have a wonderful relationship.

As to your previous remarks: yes, maybe the big ethical difference between different kinds of alleged "rationing" is the one that exists between being trapped inside a system that has to be ruled from the top, and not being so coerced and confined.