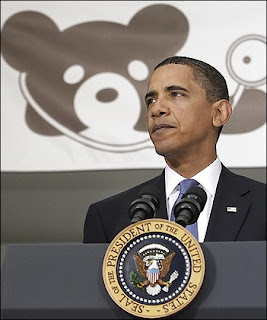 I've seen a lot of reaction to this email from BHO (see below), calling on his former campaign workers to go out and fight for Obamacare, presumably by beefing up pro-government presence at those loud and angry town hall meetings. [Added later: About twelve hours after writing this, I'm very sorry to see that, because two labor unions have started sending people to these meetings to represent the administration point of view, they have started to become violent. Here is another account of the same Tampa FL meeting.*)

Oddly enough, the one thing that jumps out at me about his message doesn't seem to bother anyone else. It's the first line of it:

"This is the moment our movement was built for."

Isn't this an odd thing for a president to be doing? To identify himself as the leader of a movement, a subset of the population consisting of a hard core of ideologically driven supporters?

Most presidents can't talk like that, because they are non-ideological moderates like Clinton and the Bushes. But go back to our last ideological president: Ronald Reagan. Try to imagine him summoning the rank and file of, say, organized right-to-lifers, urging them to go on the march, speaking of them as "our movement."

Can you imagine that? I can't.

There are countries that have had a head of state who on occasion summoned a cadre of the faithful to go out and hold "spontaneous" demonstrations as well as do other things that are in the interests of those in power. At various times, this list has included has included Russia, Germany, China, Libya, Iran, Italy....

But it hasn't happened here, until now. To us, it is something genuinely new. I'm surprised that people don't seem to have noticed it.

I realize with a cringe that such comparisons make me sound paranoid but, really, all I am only comparing the US to places like fascist Italy in this one respect. Whether this one similarity means anything in terms of other similarities, either now or in the future, is an open question. To me, it is a very, very interesting one.

Here is the Leader's message:

This is the moment our movement was built for.

For one month, the fight for health insurance reform leaves the backrooms of Washington, D.C., and returns to communities across America. Throughout August, members of Congress are back home, where the hands they shake and the voices they hear will not belong to lobbyists, but to people like you.

Home is where we’re strongest. We didn’t win last year’s election together at a committee hearing in D.C. We won it on the doorsteps and the phone lines, at the softball games and the town meetings, and in every part of this great country where people gather to talk about what matters most. And if you’re willing to step up once again, that’s exactly where we’re going to win this historic campaign for the guaranteed, affordable health insurance that every American deserves.

There are those who profit from the status quo, or see this debate as a political game, and they will stop at nothing to block reform. They are filling the airwaves and the internet with outrageous falsehoods to scare people into opposing change. And some people, not surprisingly, are getting pretty nervous. So we’ve got to get out there, fight lies with truth, and set the record straight.

That’s why Organizing for America is putting together thousands of events this month where you can reach out to neighbors, show your support, and make certain your members of Congress know that you’re counting on them to act.

But these canvasses, town halls, and gatherings only make a difference if you turn up to knock on doors, share your views, and show your support. So here’s what I need from you:

Can you commit to join at least one event in your community this month?

In politics, there’s a rule that says when you ask people to get involved, always tell them it’ll be easy. Well, let’s be honest here: Passing comprehensive health insurance reform will not be easy. Every President since Harry Truman has talked about it, and the most powerful and experienced lobbyists in Washington stand in the way.

But every day we don’t act, Americans watch their premiums rise three times faster than wages, small businesses and families are pushed towards bankruptcy, and 14,000 people lose their coverage entirely. The cost of inaction is simply too much for the people of this nation to bear.

So yes, fixing this crisis will not be easy. Our opponents will attack us every day for daring to try. It will require time, and hard work, and there will be days when we don’t know if we have anything more to give. But there comes a moment when we all have to choose between doing what’s easy, and doing what’s right.

This is one of those times. And moments like this are what this movement was built for. So, are you ready?

Please commit now to taking at least one action in your community this month to build support for health insurance reform:

Let’s seize this moment and win this historic victory for our economy, our health and our families.

______________________________________
* Here is a more disturbing video, about representatives of SEIU beating a black man at a St. Louis MO townhall. SEIU, a government employee union, was a big source of money for the Obama campaign. Now it looks like they are starting to provide muscle as well. For me, the scariest thing about this incident is that it has been more or less ignored by the media. CNN reported on the Tampa meeting (see links above) but the more brutal union behavior at St. Louis was ignored by everyone but Fox.

I think your observation about his opening line is very astute, not at all paranoid. You earlier called him a Chicago 'ward heeler' which I think is the most apt characterization of Obama I've heard. He's trying to win his health care with the same strategies he used to propel his political career. I think this fight is one he will lose - it's just too expensive, the polls are against him and moving more so, and apparently the majority of Americans like their health care arrangements by and large. (raise my hand)

Based on what I've seen of him, I think he is a politician of rather limited skills, and he doesn't appreciate that. He won an election against a weak opponent and against a party whose 'brand' was extremely tarnished at the time of the election. Things have changed on many fronts and he'll have to play much smarter now to make any gains. I don't see him doing this - if he gets ugly about healthcare reform and loses it, he'll look very weak and incompetent. He shouldn't be pushing so hard on this one agenda for his own political survival.

I think most of his policies have been terrible ideas, his thinking is locked into 19th-century socialism, his appreciation of the digital age and its implications seems to be about an inch deep.

I agree completely. (Boy, those are words I don't get to use very often!) If BHO is wise, he will, so to speak, do a Clinton and completely recalibrate his approach at this point: ie., move to the center. At least one thing stands in the way. Whatever his faults, one vice Bill Clinton did not have was arrogance. This sharply distinguishes him from BHO, who is profoundly convinced that he is supersmart, uebercool, and beloved of the gods. He has oodles of that which goeth before a fall. So I doubt if he is going to change a thing.

Loved your commentary about Clinton and his 'rescue' of the two ladies! It's true, Bill Clinton is looking good right now - and having opposite polarity between congress and oval office was probably a good thing during his terms. He was not arrogant, and I think he is just smarter than Obama. BTW, I'm not a huge fan of Hillary, but she seems waaay smarter than BHO. I find myself wondering, if he's seriously weakened by 2012, whether she will make a sudden, swift attempt at the Democratic nomination. And, we can always hope that the nation at large will experience a serious 'upwing' move toward libertarianism, becoming seriously disillusioned with both leftwing and rightwing forms of authoritarianism. :-)

I see signs of an "upswing" right now, but I don't think it is due to an ideological change of heart.

Since the end of the New Deal, the American electorate has had a weird habit of electing a regime, then recoiling in horror (or is it disgust?) and doing the opposite. Usually this takes the form of giving the executive branch to one party and awarding the legislative to the other.

To some extent, I think, this is based on sound instincts (ie., skeptical ones) about power and government. But it also must have a lot to do with the deep-seated American fear of strong positions of any sort.

Anyway, having elected two super-big-government presidents in a row, the voter is starting to think, gee, maybe having a government that interferes everywhere and in everything is not such a great idea.