The Public Option is a Trojan Horse: Reason #2 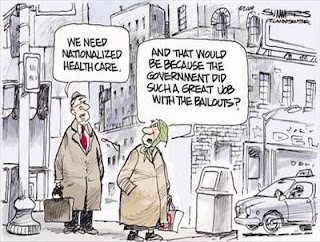 Yesterday, I explained a reason why the health insurance "public option" in American Affordable Health Choices Act of 2009 is a Trojan horse that is likely to result in most Americans, like it or not, being dumped into the hands of the government. It had to do with the fact that the some or all of the costs of this service would be transferred, by means of taxation, onto people other than the individual consumer, making the cost to them relatively low. Thus the government insurance company would tend to crowd out the private ones.

According to this study there is another reason it would tend to shove private health insurance out of the picture. It has to do with the way in which the plan would combine government medicine with a certain feature of the present system, a feature that the study describes like this:

In today's system, hospitals and physicians provide a substantial amount of free care to uninsured people called "uncompensated care." Also, payments for Medicare and Medicaid are usually less than the cost of the services provided resulting in payment shortfalls. Hospitals and physicians cover the cost of uncompensated care and payment shortfalls under public programs by increasing charges for private health plans in a process known as cost-shifting.

Since we can expect the "public option" -- a vast expansion of Medicaid -- to continue the same pricing policies, this will shift further costs to the shrinking number of people who still have private health insurance. This of course would increase the price gap between public and private insurance, driving even more people into the government medical system.

I expect the result would be a system in which the majority have crummy medical care but at low cost to them (until tax time) and a wealthy minority have much better care -- maybe something very much like the sort of care that most Americans have now.

This is why the town hall protesters keep mentioning the fact that members of congress will not be taking the public option for their own medical insurance. They all have private insurance now, and they are too wealthy to be driven into our part of the system.

Isn't it ironic? If you believe in equality and "fairness," the ideas the drive government health systems, you ought to be against this one!
Posted by Lester Hunt at 4:22 PM

Absolutely! I note, too, that when some members of Congress get preachy-moral about the wasteful and unnecessary procedures performed on the elderly, they don't mention Ted Kennedy and how he is probably still alive because of extraordinary state-of-the-art medical care being administered to him.

I have a personal story a bit related to the above: A good friend of mine several years ago was dealing with late-stage ovarian cancer (sadly, she died about two years ago.) She and her husband, both very educated Russians, pursued many medical treatments available to them, and read up on latest clinical trials - they were quite a team. During the last few months of her life she had to go to ER a few times for intestinal blockages from the tumors. One night at Mass General, they had waited hours to be seen and were finally taken into a 'special' wing because no one could see her in the regular ER facility. The husband was furious when he saw this wing; it was decorated extremely well, with expensive paintings and designer furniture everywhere, and it is generally used only by the political VIP of Massachusetts (and elsewhere) with the rationale that these public figures need a special private area away from the press, etc.. The husband said it reminded him very much of how the system worked in the Soviet Union (they left that country 30 years ago with the clothes on their backs) and he was deeply surprised and disappointed to see such a system in place in the U.S.

The founder of Whole Foods has an interesting essay in WSJ today about alternatives to ObamaCare. I don't think any of these issues are being addressed in Congress.

Thanks for that link! There are some very good ideas in that article that might make it to the "employer option" part of the plan. He doesn't fail to make the point that he is, himself a generous boss but he doesn't address the "public option" at all.

The problem, again is a failure of laissez-tomber. A free market system cannot thrive if hospitals persist in treating uninsured patients at the ER. For both doctor & patient, there is a mutually beneficial transaction & there seems to be a presumption that Jesus will pay the bill. It's a rare patient who arrives with a real emergency in the sense that it results from unforseen circumstances.

Yes, thanks for the link. I often wonder whether my Birkenstock-leftie colleagues realize that when they shop at Whole Foods they are giving their money to a libertarian.

When I wrote the above, I was half-joking, but now I see there is talk of a boycott of Whole Foods because Mackay had the gall to oppose Barack the Great: