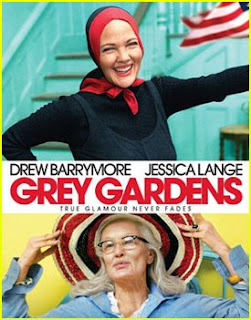 This is not the classic 1976 documentary by the Maysles brothers, the movie that made the aunt and cousin of Jacqueline Kennedy Onassis famous. It is a recent HBO dramatic film, now available on DVD. I recommend it for all fans of the 1976 film (a category that definitely includes me!).

It is worth watching for at least two things:

First, the uncanny impersonations by Drew Barrymore and Jessica Lange of the beloved eccentrics, Big Edie and Little Edie Beale. If you ever doubted the brilliance of these two, here is the evidence you need!

Second, this film tells the story of the making of the original film but also, through flashbacks, the backstory that is only hinted at in the documentary.

The new film sheds a lot of light on the big question, the one that occurs to anybody on the most superficial acquaintance with their story: how did these two get from that to this?

They were members of the American aristocracy, living in a mansion on the sea. They seemed at one time to have had talent and promise, and apparently some hopes of careers in show business. They ended up living in such squalor, with dozens of feral cats and racoons and opossums have the run of the house, that the Suffolk County Board of Health conducted a series of "inspections" (or "raids," depending on your perspective) that resulted in an order for their eviction. Cousin Jackie enabled them to stay in their home by contributing $32,000 toward cleaning up the crumbling building -- a lengthy project that involved removing more than 1,000 bags of trash.

What the Hell had happened?

Oddly enough, the documentary conveys a less dark, less depressing answer than the dramatic film does. It suggests that they were simply too unworldy to function in the workaday world, ineffectual angels of art, beating in the void their luminous wings in vain. (Hat-tip to Matthew Arnold here.)

The dramatic film depicts a more complex situation. After Big Edie's marriage to Phelan Beale came apart and, subsequently, her affair with her childrens' music teacher evaporated, she withdrew more and more into Grey Gardens, eventually becoming (as far as I could tell) seriously agoraphobic. (Notice that in both films she never leaves the house after this point in her life, and can usually be found in the yellow bedroom.) Since being completely alone would be unbearably painful, she pressures little Edie to come home from New York, where she is trying to start a career on Broadway. The two then spin out into their curiously interesting folie à deux.

Notice that Big Edie died within a year of the completion of the documentary. My guess is that this was not a coincidence. In the dramatic film, she tries hard (even rather cruelly) to stop Little Edie from attending the premier. After that, I would imagine that helping to promote the film took Little Edie away from the house and, left with only herself for company, Big Edie crumbled. Like I say, though, I am guessing here.

Part of the reason I think all this happened was that both these people were women. To some extent, what I mean by that is the feminist thing: their artistic ambitions were thwarted by The Patriarchy. The dramatic film shows old Phelan Beale seriously angered to see Big Edie singing and dancing at all, even in her own home.

But there is more to it than that. Try to imagine an aging man and his son living alone in a dilapidated mansion, surviving on a meager trust fund until it evanesces, just singing, bickering, reminiscing, dancing, inventing family legends about how various villains have thwarted them, and refraining from making any contribution to the economic system. I don't think that we would see that as charmingly eccentric. Our world tolerates that sort of thing in women (just barely!) but not in men. In a way, women are freer then men. Admittedly, though, this particular sort of freedom is not very valuable.
Posted by Lester Hunt at 11:03 AM