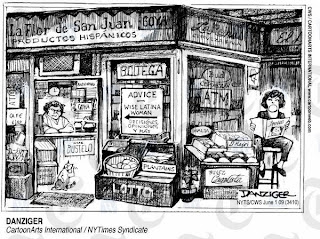 As everyone knows, Judge Sotomayor's legal opinions are much more moderate than her off the bench speeches and writings. Which should we believe?

Clearly, we should believe the off the bench statements, for a very simple reason.

I'll give you a clue: the same profile -- off the bench writings much more scary than on the bench -- also fit Judge Robert Bork at the time of his confirmation hearings. Why do you suppose Democrats were having hot flashes about his scholarly writings?

The life of a circuit or appellate court judge is very constrained. Of course, in this rule-bound, overregulated world, we are all constrained in a way. But there is a big difference between me and one of these judges.

I am sure the village of Oregon WI could come over right now and "write me up" for several violations I am committing on my property without my even knowing I have committed them. This is true of most Americans who own anything. There are several reasons we are not all paying fines, and possibly doing time in the pokey: that a) the magistrates just don't have the resources to enforce all the rules and regulations that are on the books, b) they are actually decent people and don't want to harass us, which means that c) they don't really care what we do, as long as the mischief is not too great. We are protected against the massive, unpredictable, and incomprehensible tangle of rules by our own insignificance.

With a judge it is very different. There are all sorts of ways a judge's decision can be wrong, so that there are plenty of rules that apply to them, just as to us. But there is a big difference: in a judicial decision, there is always a loser, and the loser always has a strong motive to appeal if they can find a relevant flaw in the decision. When your judgment loses the appeal, the higher judges give a detailed account of why you were wrong, and I've read some stinging ones. It must feel like being a law student and having your exams graded in public.

Writing opinion pieces and giving speeches is obviously very different. There are few constraints and little enforcement. Sure, someone may disagree with you and say why. But you are free to ignore them, and the level of rigor in what they say may be such that you won't take them very seriously if you don't.

Of these two, judging on a lower court and writing opinion pieces, judging on the Supreme Court is a lot more like the second situation than it is like the first. There is no appeal from its decisions. They can overrule themselves, but how likely is that? And even if they do, and it is not just a matter of the justices changing their minds, it is not like being publicly spanked by their superiors.

Supreme court justices are like law students who grade their own exams.

To see how Sotomayor will act on the SC, look at how she acted in the situation that most resembles it. If she suddenly retracts all her extreme pronouncements, as she did today, the big question is which do you believe: the pronouncement or the retraction?
Posted by Lester Hunt at 5:39 PM

What are, anyway, these "extreme" pronouncements? I've heard of the so-called "reverse racism" thing, which is just a twisting and shoehorning of things by a right wing desperate for relevance, but I'm not sure what else there is that could possibly be so non-centrist and questionable about her judgment. I haven't really studied the issue (i.e.: her record) too much or paid awful much attention to the politco-pundit storm that has enveloped her nomination, yet, I imagine if there were anything really liberal or eccentric Limbaugh and co., who I imagine are doing the research, would have long ago dug it up and rubbed it in everyone's face.

Her comment that a wise latina, more often than not, would reach a better decision than a white male was made on six different occasions, in some cases in writing. Then there is the one where she says that there is no such thing as an objective stance, only a series of perspectives. This is right out of Nietzsche by way of "critical race theory" and other post-modernist ideas that are fashionable in law schools. I happen to admire Nietzsche's writings very much, but as a SC justice I much prefer Sandra O'Conner (with whom Sotomayor was explicitly disagreeing in the wise latina comment).

Limbaugh exaggerated the significance of this in his usual cynically crude way ("She's a bigot!!"), but that doesn't mean that they are nothing to be concerned about and are not extreme in terms of current legal practices.