Are We Stupid, Ignorant Ingrates? 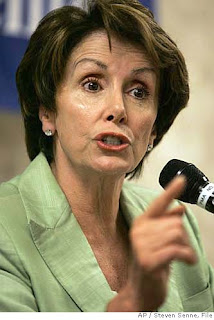 Wow. I just watched TV news shows for an hour or so and I was amazed by the sheer anger of these people. On the Larry King show there were politicians, financial reporters and a personal finance adviser yelling, literally yelling into the camera about how stupid and ignorant and selfish the voters are for revolting against the administration's Wall Street bailout plan.

It was very creepy to watch, as if someone had torn the lid off Hell and I could see the demons howling.

Our masters do not take our disobedience very gracefully, do they? Thank you, Larry King, for showing us their true nature.

One thing that not one of these people has yet mentioned:

Sunday evening, Treasury officials held a conference call for financial services industry players only (!!) which was infiltrated and revealed by bloggers. Thinking they had already won, they seemed to think it was safe to start being honest, and they revealed:

1.) They actually didn't intend to to anything for two weeks. That is, their screaming about how we had to pass this Monday morning, so fast we could not even think about it, were apparently BS of the most evil sort -- I say "evil" because it was apparently intended to disenfranchise us -- to cut us out of the dialogue and keep us in the dark.

2.) The "tranching" provision was "a mere formality," and could easily be gotten around. They could dump all $700 trillion on the affected areas right away.

3.) The CEO pay caps were not a problem. They only applied to new CEOs.

Meanwhile, people who could read faster than me revealed that the oversight provisions the Democrats supposedly got were meaningless. They consisted of two committees. One committee would include people like the Treasury Secretary, the Chair of the Fed, the Chair of the SEC -- the very people who were to be overseen! The other would consistof people appointed by Congress -- and had no power! The oversight involved was was pure BS, in other words.

I am sure these are among the things that turned the House and the public against this plan.

And yet the attempt to emotionally blackmail us continues. I say, come up with a reasonable plan and it surely will pass. This time, the two-party duopoly that rules us and its slaves in the media came up with one that was both incompetent and morally compromised.

The fact that the only proposed solution to the current mess was voted down is a very serious problem. But voting it up would have been much, much worse, and the root of the problem is not the ungrateful, uppity voters think they deserve better than this. It is the proposal itself.
________________________________________________
BTW: Here is how everyone voted. I note with sadness that my Representative voted for this thing. My humble recommendation: vote for the noes in November and against the ayes.
Posted by Lester Hunt at 8:04 PM