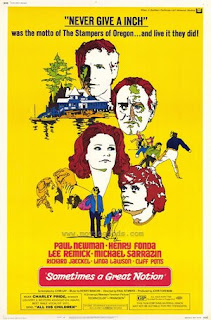 Paul Newman, blue-eyed boy from Shaker Heights, died today. He was 83, the same age my father was when he died last year.

One of Newman's most enjoyable movies, I always thought is "Sometimes a Great Notion" (1971), which he directed.

It was based on a great novel by Ken Kesey, who some thought looked like Newman. The book was the sort that reviewers used to like to call big! lusty! brawling! -- and the movie was pretty faithful to the book (except for omitting Kesey's experimental treatment of time). Indeed, the opening shot, of the rambling old house on the edge of a thickly forested river, made me gasp because it looked exactly as I had imagined the scene in the novel.

I loved the Stamper family motto: "Never give a inch."

Newman and Hank Fonda play the Stampers, small businessmen, independent loggers who arouse the wrath of a little Oregon town by refusing to support striking workers by suspending work themselves: scab businessmen, in other words, who kill trees and sell their dead bodies. Not the sort of heroes you would expect these two lefties to be playing, but I suppose they must have been more complex and multi-dimensional than that. Or, possibly, ideological lines have been drawn more clearly and rigidly since the free-spirited sixties. Today, it would be hard to imagine someone as far to the left as Newman making a movie that has so many of "wrong" ideas, attitudes, and feelings as this one does. As Nietzsche said, "convictions are prisons," and we are all doing time now.

Here is a heartbreaking scene in which the Stampers, understaffed and struggling, have suffered a devastating accident that probably would not have happened if it were not for the strike:
Posted by Lester Hunt at 8:52 PM

I'm not sure what it portends, but for what it's worth, the first episode of the midseason premiere of Battlestar Galactica, in January, will be called "Sometimes a Great Notion."