Those House Republicans are Heroes! 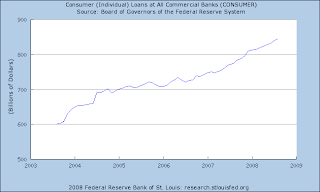 Day One of negotiating the Big Bailout has ended in failure (thank you God! thank you thank you!). Also, rumor has it that over 100 House Republicans who were not invited to this party have let it be known that their constituents are opposed to being robbed in this way, and that they will oppose it.

"We need to get the president to get the Republican House in order," Sen. Charles Schumer, D-N.Y., said on the Senate floor. "Without Republican cooperation, we cannot pass this bill." Schumer said Bush should also "respectfully tell Sen. McCain to get out of town. He is not helping, he is harming. Before Sen. McCain made his announcement, we were making progress." (This from AP news.)

Godalmighty, I hope he is right on both points: that Schumer and his gang of thieves can't bring this heist off without the House Republicans, and that McCain is "harming" their efforts.

Defenders of the bailout argue that if we don't pass their proposal, and do it faster than we can even think rationally about it, consumers will find it too difficult to borrow money to buy new homes. "This is for Main Street, not just Wall Street!" Here you see a graph showing that Main Street's ability to borrow is at record highs. Where is the crisis for Main Street that we should be panicking about? (Hat-tip to Jeffrey Tucker at the Mises Blog. See this article for more discussion of the evidence.)
_________________________
Added Later: Quote of the week: "We don't have to rush in with the greatest advance of socialism in the Western world," said Rep. Louis Gohmert, R-Texas and a backer of the House Republican proposal. "The only thing we have to fear is fear-mongering from the secretary of the Treasury."
Posted by Lester Hunt at 8:38 AM

Commander Leonard 'Bones' McCoy, M.D.: Spock, this "child" is about to wipe out every living thing on Earth. Now, what do you suggest we do? Spank it?

Commander Spock: It knows only that it needs, Commander. But, like so many of us... it does not know what.

Captain James T. Kirk: Let's take a look. Full sensor scan, Mr. Spock. They can't expect us not to look them over now.

Commander Willard Decker: Now that we're looking down their throat.
Captain James T. Kirk: Right, now that we've got them just where they want us.

The gov't created Fannie and Freddie the same way they created the Voyager spacecraft.

Anon, Some of your movie-plot-parables are too obscure for me.

"An alien phenomenon of unprecedented size and power is approaching Earth, destroying everything in its path. The only starship in range is the U.S.S. Enterprise--still in drydock after a major overhaul. As Captain Decker readies his ship and his crew to face this menace, the legendary Admiral James T. Kirk arrives with orders to take command of the Enterprise and intercept the intruder. But it has been three years since Kirk last commanded the Enterprise on its historic five year mission...is he up to the task of saving the Earth?"...

The dialog could be from the WH meeting with Dr Bernanke as McCoy MD, Paulson as Spock, McCain as Capt Kirk, Sarah Palin as Chief DiFalco and GW as Commander Willard Decker. In a gay plot twist McCain offers up Sarah Palin to join with V'ger.

"Schumer and his gang of thieves"

Isn't this the kind of invective that contributes to the fraying of America? ;-0

Side question: Doesn't this remark trade on a misleading genealogy of the "bailout"? (To wit, the origin of the plan was in the executive, not the legislature.)

The media chatter I hear on CNN suggests the deal will be wrapped up and done by Sunday.

If that happens, then it will finally prove what I've tentatively concluded some time ago. Our democracy is a facade that fronts for a corporate-military plutocracy.

Lester Hunt said...
This comment has been removed by the author.
2:02 AM

Lester Hunt said...
This comment has been removed by the author.
2:14 AM

My point about the fraying of America was that the system truly does create a zero sum game, not that the people who are enraged at each other are being sinful. The people who vote for the major parties really are my enemies, and after each election it takes me a while to get over that fact.

As to the idea that the Billionaire Bailout plan originates from the executive branch: I guess I'm just a little slow today, but I don't follow you. I was talking about what the legislative branch is going to do with it. Whether an act is theft depends on what it is, not on who thunk it up first. If it wasn't even Schumer's idea, that only makes what he is doing the more contemptible.

Peter: Exactly, except that the way to become a plutocrat in this sense is to be politically connected. Actually producing goods and services that are valuable to your fellow human beings and being paid for it is not enough.

"My point about the fraying of America was that the system truly does create a zero sum game, not that the people who are enraged at each other are being sinful. The people who vote for the major parties really are my enemies..."

Lester, it seems to me that no matter the dominant political system (and that includes the libertarian utopia), someone or group is always going to be guilty of sin, or be "the enemy," from some other perspective. In any case, many countries have significantly more "zero sumness" (as you call it) built into their political system and suffer far less from the kind of political divisivity you lament. (I'm thinking Sweden, Denmark, Germany...) So I'd say a link between our particular political structure and a peculiarly rancourous political discourse is unlikely.

Anyway, in re the bailout, you call a plan hatched by two Republican technocrats, sponsored by their Republican president, subsequently reworked by Democrats in Congress to include, among other things, ideas sponsored by House Republicans, as the work of "Chuck Schumer* and his gang of thieves." If the problem with that elision isn't obvious to you, I don't think I know what to say.

_______________
*What makes this bit of synechdoche (I want to say Schenectady) arguably perverse is that Schumer's the one to have questioned the necessity of a lump-sum with zero oversight, and to have advocated a requirement that the loans actually be paid back.

I didn't mean to give him primary responsibility for the bailout. By "his gang of thieves" I meant the gang of thieves of which he is a member. If I say "your country" or "your company" I don't necessarily mean that you run or own them. This particular gang of thieves is primarily Paulson's and Bush's, obviously.

I was reflecting my disappointment that the Democrats not only are failing to stop what is probably the largest single act of theft on the part of the relatively rich and against the relatively poor, excepting military conquests, in history -- but they are participating in it fully. I don't accept that their saying "well, okay, but we need oversight here" shows that they are not thieves.

As to whether European-style welfare states are less socially frayed than the US, I really have no idea, but clearly there is more than one causal factor here, and there could be other factors at work, ones that enable Germans to live in a zero-sum state without having as many zero-sum emotions. Some of those countervailing factors might be things that I don't particularly care for (eg., a tendency to take "things lying down," as we Americans say, etc.)

(BTW, it occurs to me that Theordore Dalrymple's brilliant essays on life in England, eg., Life at the Bottom, suggest that England at least is worse off than we are in terms of fray-edness, in fact much worse. He tells us that the sterotypical super-polite Englishman is fast going extinct.)