The Case of The Jewel of Medina 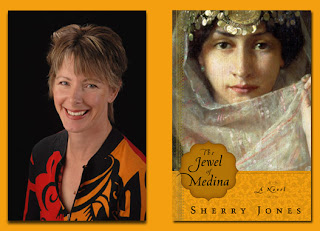 Philosopher Carlin Romano has an interesting and very sensible discussion of the case of the novel, The Jewel of Medina, which is gaining notoriety even before it is published. (Hat tip to Arts and Letters Daily.) British philosophy blogger Stephen Law has weighed in on it as well.

Briefly, the facts, as they have been reported above and in the opinion piece in the Wall Street Journal that originally broke the story, are these. Over a period of about five years, Sherry Jones researched and wrote a historical novel about A'isha, the third wife of Muhammad, the Prophet of Islam. This project included, among other things, studying Arabic. Random House signed a contract to publish the book and organized an eight-city book tour.

Meanwhile, they sent the galleys of the book to Denise Spellberg, an associate professor of history at the University of Texas at Austin and a specialist in the period in which the novel is set. They asked if she would be willing to write a positive blurb for the book's jacket. Publishers routinely do this as part of their efforts to win favor and sell copies of the book. In this case, it had, to put it mildly, the opposite sort of effect. Spellberg, who later described the novel as "very ugly, stupid piece of work" immediately "warned" (her word, apparently) Random that publishing the book would expose their building and staff to very serious danger, calling it "'a declaration of war … explosive stuff … a national-security issue." At about the same time, she alerted the editor of a Muslim web site about the book and her view that it ""made fun of Muslims and their history." This led eventually to message to an email list and eventually to a wave of angry blogging about this "new attempt to slander the Prophet of Islam."

Random canceled plans to publish the book, apparently breaching their $100,000 contract with Jones.

I see a fascinating ambiguity in the reported facts about Prof. Spellberg's behavior in this case. They seem to be more or less consistent with at least three radically different scenarios:

1. She was genuinely concerned about the danger to Random and was offering them her (unsolicited) professional opinion on this matter in order to be helpful. This would be perfectly unobjectionable, of course. She was not trying to violate another person's freedom of expression, she was only exercising her own. One thing that stands in the way of this interpretation, at least for the moment, is the fact that none of the quotations from the book that have come to light so far seem at all insulting or, to a rational person, morally offensive. From all accounts (except Prof. Spellberg's) it sounds like this book was not meant to be insulting or even critical of Islam or its prophet. We are not talking about The Satanic Verses here. More important, this scenario is not easy to square with the fact that, at the same time that she was helpfully warning Random, she was apparently trying to get that web site editor upset and alarmed about the book. Couldn't she foresee that this could indirectly trigger the very sorts of events that she was supposedly trying to help Random to avoid?

2. Stephen Law suggests that, perhaps, she was fearful of her own safety and made that hard-to-square phone call in order to dissociate herself from the book. Here once again the odd thing is that she seemed to be actively trying to get others upset about the book. That would seem to mean, on this interpretation of the facts, that she was in effect trying to sic the dogs on someone else for the sole purpose of keeping them from biting herself.

3. Yet another possibility is that she detested the book herself and was using the hypothetical violent behavior of others in order to get its publication suppressed. This raises a very interesting ethical issue. We all know what to think of hooligans who break into a newspaper office and destroy its presses because they print things that the hooligans don't like. What, on the other hand, should we think of someone who uses their behavior, and for the very same ends -- to suppress words that they don't like? Suppose that these other people would never do anything violent themselves, and have always deplored such thuggery.

Usually, thugs of this sort don't chop up printing presses with axes simply because they enjoy doing so. Such behavior is a means to an end: they want to silence someone else. If the mere threat of doing this is sufficient to silence these others, so much the better. Thus someone who uses their behavior in order to achieve their ends -- by deliberately communicating and facilitating the threat -- is functioning as an essential working part of the same system of oppression. The fact that they would never dirty their own hands with violence might make their guilt the less, but their shame is more.

In the public controversy about this case, Salman Rushdie deplored the incident as "censorship by fear." On the other hand, Stanley Fish, in his blog, denied that this is censorship at all. Fish holds the theory that the word "censorship" properly speaking can only be applied to governmental suppression. I have never been entirely sure what to think about this sort of issue. But I do know what the present status of Jones' book is: its publication has been picked up by a British publisher, more obscure and with fewer assets than Random, but with much more courage.

Thus the book has been shunted into a more marginal area of the publishing world, where it is apt to get less attention and be less upsetting of the rest of us. This is what usually happens in cases of semi-quasi-censorship. No blood is shed, no property is destroyed, but it is easier to ignore what we don't want to hear.
______________________________
Added Later: The offices of the British firm that is publishing this book have been firebombed.
Posted by Lester Hunt at 7:20 AM