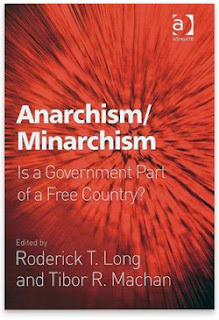 Here is a nice review by David Gordon of a new book that I am in. Here Amazon lets you search inside the book. You can buy it from them at the hair-curling price of $79.95 -- and up! (What is that all about, I wonder?)

My role in this project makes a rather odd story. The editors wanted to have an equal number of defenders of anarchism and minarchism (the state can be a just institution, but only if its powers are seriously limited). Without asking me, they assumed I am a minarchist. When I turned my essay in, they were disappointed. I argue that the justification of the state is a serious problem that must be faced, but proposed no solution to it.

My view is expressed very well by Tom Paine when he says: "Government, even in its best state, is but a necessary evil; in its worst state, an intolerable one." I consider this an anarchist view, inasmuch as it means that the state is not a morally legitimate institution, that it is intractably problematic from an ethical point of view. Come to think of it, I will go one step further than Tom, because I am not so sure that this evil is necessary.

Anyway, I said they should put my essay in the anarchist half of the book. They didn't want to do that, because the table of contents would then be lopsided: 4 minarchist to 6 anarchist. They ended up leaving it in the minarchist part, but making it the lead essay, so it would be a sort of introduction to the rest. Not a perfect solution.

I'm sorry to cause all this confusion. I used to be a minarchist, but decades of dealing with real government have convinced me that the dominant characteristic of the state is what Ortega y Gasset called its "harshness."
Posted by Lester Hunt at 1:31 PM