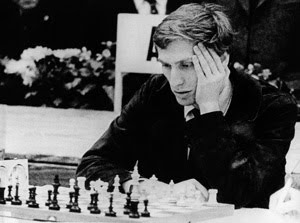 Here is an interesting column by Martin Gardner on late chess great, and anti-Semitic and anti-American (America is run by Jews, dontcha know) nut case Bobby Fischer. It contains some facts I did not previously know -- as for instance that in his later years, after he went completely over the edge, he seldom changed his clothes or removed his baseball cap. I imagine downwind of him was a bad place to be.

Gardner's main thesis seems wrong to me, though. The explanation of the Fischer phenomenon, he suggests, is that he was very very intelligent about chess and very very unintelligent -- in fact a complete moron -- about everything else. He suffered from unevenly distributed intelligence.

The modern notion of "intelligence" denotes a certain value-free adroitness in manipulating symbols of certain sorts, such as words and numerals. It enables you to solve problems of certain a certain kind. If your problem is "how do I make this crackpot theory of mine seem plausible so I can continue believing it?" then this intelligence-thing is just what you need.

As I suggested when Fischer died, a failure of intelligence was probably not his problem. Rather, his problem was with something that people don't talk about much any more: wisdom. Wisdom means understanding the things that must be understood in order to live a good life and be a good person. A person who lacks wisdom is -- another nearly obsolete word -- a fool. Fischer was a straight up, confirmed, incurable fool.

Back in the days when people respected wisdom and abhorred folly, intelligence was called "cleverness" and was not worshiped as it is now. Cleverness, like wisdom, is good, but, unlike wisdom, it is also dangerous. It is what makes a successful thief and a fluent, plausible and captivating liar.

You don't need a lot of intelligence, just enough to balance your checkbook and do your job. What you cannot do without is wisdom. Without it you are a poor lost soul, wandering in life's dusky maze without a clue, indeed without a will or a way to find one. And that I think is what Fischer was. A damned fool.

I wish we could bring back the ideas of wisdom and folly. But that would mean a huge cultural change. It would mean placing value on things that we hardly even have words for any more, and letting go of things that we value too highly.

By the way, it just occurred to me, this probably means we're all fools now.
Posted by Lester Hunt at 11:19 AM

Perhaps to bring about a world of tolerance and understanding we subjugated strong opinions into political correctness and social corectness. The iconoclasts like Fisher who were considered fools with "nothing to lose" were the ones who lashed out at the ones they perceived as the promoters of correctness.

In order to aleviate offensive words towards others, the new heroes are the ones who can deal in non-subjective objects like sports and money; so we now raise up the business mogul and pro athlete as Promethian Hero.

I'd be interested to here what you have to say about the profession of philosophy as it relates to this distinction. It's often frustrated me that "love of wisdom" seems to be disconnected with the mainstream practice. For instance that modern-day ethics doesn't seem to have anything to tell me about how to live a good life...but rather how can I prove that what is good, is good so that I can continue to believe it? Is this perhaps Nietzsche's critique of Kant?

"Wisdom means understanding the things that must be understood in order to life a good life and be a good person."

Which amounts to no more than believing one's own platitudes. I think it's safe to just stick with Socrates on this one.

I'll throw in my two cents. Perhaps wisdom relates to the ability to generalize to principles and remove one's personal stake and emotions about a current specific issue and try to cast it's significance in a more abstract and logico-empirical light. Maybe it's the difference between an earlier legal era that grasped the general universal principle of a 'premeditated crime' that could be applied to all, versus today's expedient listing of special interest groups that are singled out for protection against 'hate crimes'.

Nice post. I'm quite sympathetic to your view about bringing back wisdom. I am curious what you think about another explanation for Fischer's behavior: that he was mentally ill. (NB: I've read some Fischer biography, but not enough to know how plausible this explanation is.) Do you see that explanation as incompatible with the wisdom/folly explanation, or not?

Thanks for your comments, folks. Sorry I've been out of touch, but I was away at a conference for several days and that isolated me from the internet for the most part.

Ethics, like the rest of philosophy, is becoming increasingly technical. It seems to be a law of nature. But there still are some around who are writing on real-life issues and have a potential for enhancing wisdom. I liked Tara Smith's "The Virtuous Egoist," for instance.

Yes, my own view is that thinking in principles (rather than responding to situations on a range-of-the-moment basis) is an essential ingredient of wisdom.

Depending on one's conception of mental illness, the notion that BF is mentally ill (a paranoiac?) may be consistent with what I am saying here. One difference between "mental illness" and ethical categories like "folly" is that the former carries the suggestion that the person involved is not responsible for being the way they are (illness is something that happens to you, not something you do). I am assuming that he is (at least partly) responsible.

OT - have you read about this stuff?

the copyright treaty that Obama says must be kept secret because of national security? It got leaked somehow. Got the link above through Virginia Postrel.

I didn't know about this. Wow. Especially the bit about withholding politically explosive information for "national security" reasons. I seem to remember Nixon doing that.

What a valuable identification - thanks Lester, I think this says something profound about our culture.

My grandfather used to say "there's nothing worse than an educated fool." I always liked that.