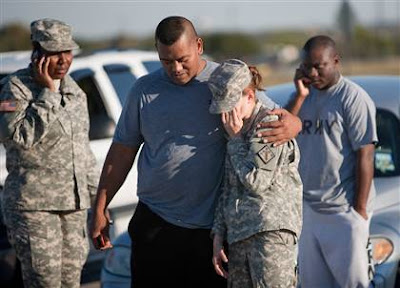 The backstory of the monstrous shooting of 50 people in a confined space at Fort Hood by one army psychiatrist, Major Nidal Hasan, is very curious. Raised a Muslim, the man accused of the crimes joined the army in 1997, little dreaming that the next evil empire the US military would attempt to crush would be radical Islam. His cousin told Fox News that his attitude toward the service changed completely after 9/11. He tried to buy his way out of the army, which had taken on huge expenses in paying for his entire medical education. His aunt told a similar story. Of course it did not work. In the following years he became increasingly pious and increasingly bitter about the war in the Middle East. He got into nasty arguments with other service personnel by expressing sympathy for suicide bombers and suggesting that Muslims had the right to "rise up" and kill Americans. He had argued against the war in therapy sessions with his patients.

Then, when he learned recently that he was going to be deployed to Iraq (other versions say Afghanistan), he became increasingly distraught. Finally, he snapped.

It seems an obvious and serious mistake on the army's part to deploy this man to the Middle East. It sounds like he provided plenty of evidence over the years that if he ever went over there his sympathies would be with the enemy. Why on Earth did they think this was a good idea?

I realize that the military cannot let you out of being deployed just because you don't want to go. I'm sure most of those who go don't want to. But this seems to be well beyond not wanting to go.

One of the many reasons I have always been against the draft is that in the field you certainly want your own people to be completely on your own side. An army of slaves is not going to be reliably on your side. Obviously, neither was Major Hasan.
Posted by Lester Hunt at 8:07 PM

I feel lost after reading this. Hasan wasn't drafted - so how does that fit into your anti-draft idea? And in what war that the U.S. has fought in did drafted soldiers prove to not be reliably on our side?

The connection between Hasan's apparent inability to get out of the military and conscription is that both are about coercion, though of course of different sorts. As to the question about the draft: in the Vietnam conflict we had a conscript service and morale in the field was absolutely abominable. While not on the enemy's side, American servicemen were in a significant number of cases not exactly on ours, either. All indications I have seen suggest that in that respect, Afghanistan and Iraq are much better, in large part presumably because the people in the field were not forced to serve.

What's a significant number of cases? Was this also the case for previous wars?

This is based on anecdotal evidence gleaned from veterans and deserters (yes, deserters) at the time, but the morale of the troops in Vietnam was apparently much worse than in WW II, mainly I assume because, though often conscripted in that one as well, WW II service people believed in the cause in far more cases did those who served in Vietnam. Note, among many other bits of evidence, that it was during Vietnam that a slang term was coined for assassinating one's superior officer ("fragging").

It seems pretty clear that, though the current Middle Eastern wars are like Vietnam in that they are very long and have no clear goal or end in sight, morale is much better than the all-time low of Vietnam. My explanation: those serving in this conflict actually asked to serve.

I guess that's what prompted my confusion. In your original post, you say "An army of slaves is not going to be reliably on your side", i.e. - conscription is the sole issue. And now you introduce a new factor - belief in the cause.

Should I have read "belief in cause" into your original post or are you backtracking?

My original point was about consent. Hasan wanted out of the army and that, I was arguing, is a reason [not a conclusive one generally, but in this case a damn good one] to let him out. One of the reasons why consent matters in the military is that you want you personnel to be solidly behind the cause.

That's what I mean. 10 million men were drafted for service in World War 2, i.e. - they were conscripted without consent, yet they proved trustworthy overall.

That's true, because of the nature of the cause they were fighting for, which they believed in. If a draft had been used in Iraq, where such reasons were lacking, where support in the general population was weak from the very beginning, it would have resulted in a Vietnam-like morale Hell. That's not what happened, because the people who served there were self-selecting.