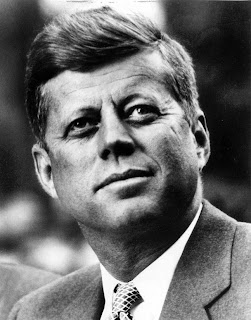 This is one of my favorite pictures of him. It is the frontispiece of the 1962 volume of The Public Papers of the Presidents: John F. Kennedy. Yes, I do own the complete set.

I really don't know why I find this man so fascinating. I was not a fan of his policies and they have not by any means improved with age. This is, I think, an interesting question, because I am far from being alone in giving him more attention than, objectively, he seems to deserve. Why is he such a powerful mythos?

His only lasting accomplishments in office, other than the Peace Corps, were the beginning of the Vietnam war and a tax cut that seemed to be (perhaps was) irresponsible at the time (and years later gave the Republicans one of their worst ideas). To these I suppose we must add a series of beautiful images and memorable speeches.

Yes, the fact that he and his wife and his children were physically beautiful is part of the the solution to the mystery of the Kennedy myth. If, as Jay Leno said, politics is show business for ugly people, he had a great (and of course unfair) advantage over the rest of the field.

Being tragically cut down was another advantage, in a way. He became one of those magic people, like Marilyn Monroe and James Dean, who never grew old. They created a few images of glowing beauty while their flaws and shortcomings, which in all human beings are obvious enough, never developed and ripened into something really repulsive.

James K. Polk came into office, announced four goals he meant to accomplish, achieved all of them, and retired after four years. Unlike Polk, Kennedy was not a superlatively skilled politician and did not do much with the three years that fate allotted him. But he did manage to withdraw from the scene before, like Johnson, he had managed to do anything that was clearly awful. So only those images remain -- which is an accomplishment of sorts in itself.

i was out running a couple days ago and a nirvana song came on. i began to contemplate the incremental acclaim nirvana has received because of kurt cobain's suicide. great band, but i think it has to be acknowledged that they get more credit because of the suicide. (same goes for the whole list of other musicians who died young)

It's a curious phenomenon. Some people call it "necrophilia," but surely it has nothing to do with perversion. It's one of those weird things that normal people do.

I think Kennedy really represented a generational change. Just as Obama symbolizes the African Americans' rise in America, Kennedy was a descendent of the 19th century European lower classes immigration and was resented much like Obama by the WASP elite. The combination of JFK's pecadillos and mob connections were testament to that.

I had a childhood friend whose living room had framed pictures of Pope John XXIII and JFK, so I have no doubt there were Americans for whom the consideration you raise was an extremely important one. But it doesn't explain why he is such a resonant mythic figure for so many of the rest of us.

INTERESTING, EVEN GROWING UP IN CANADA I WAS INTERESTED IN THE KENNEDY MYSTIQUE. I REMEMBER MY MOTHER SAYING THE ONLY DIFFERENCE BETWEEN THE KENNEDYS AND THE REST OF US IS THAT UNFORTUNATELY SOMEBODY KEPT NOTES.

Ironically Pope John XXIII was not considered an outstanding intelect but like Kennedy his folksy charisma captivated many. Nixon also had an attractive family but Kennedy vs Nixon was similar to John XXIII vs Pius XII.

Many credit the Woodstock generation with starting the sexual revolution but the Kennedy's along with the Hollywood crowd and the hip Easterner's in their generation had alot to do with setting it off.

Much like Princess Di who was more of a cultural figure, JFK had the same hold on people, so his myth was hard to shake off.

Did you ever check out the TZ episode that aired the week before Nov 22 1963 and the Nov 29 (episode that was originally scheduled for Nov 22)?

I discovered this book in my parent's basement today:

High quality news and photos, all compiled from AP reporting.