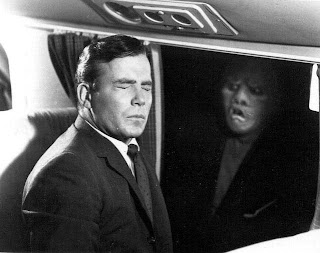 I don't take top ten (or top n, where n is any number) lists seriously (especially after the AFI's loathesome "100 Years, 100 Movies" list) but they can be fun to do. Here, in no particular order, is my attempt at a plausible list of the 10 greatest T-Zone episodes, presented in knowledge that there are many other possible "top 10" lists. Except where noted, all were written by Rod Serling.
1. "The Midnight Sun" (Season 3)

About this one, I have already written this: ... a brilliantly crafted piece, full of irony and surprises. The surprises begin immediately after the title, which suggests a land of frosty cold, but soon is revealed to refer to a world of searing heat, where the sun is so huge and bright it still lights the sky at midnight. They continue to the end, which is one of the best "twist" endings (Rod called them his "snappers") in the series. The closing narration is also mercifully free of any preachy or patronizing moral.

The closing narration gives the impression that this episode is about relativism: what is ugly to the aliens in the story is beautiful to us. But a closer look at the dialogue suggests it is about race. At one point, the doctors tell the protagonist that if the operation fails they do at least have special places where people like her can live with others of their kind. Her response is the most emotionally intense line she says, delivered almost as a scream: "You mean a ghetto, don't you!?" Earlier in the fifties, Serling had written realistic teleplays for dramatic shows like "Playhouse 90," and had never been allowed to deal seriously with the subject of race, generally because a sponsor objected (God forbid cigarettes should be associated in the viewer's mind with something that upsets people!). Now that he dealt in fantasies and parables, he could discuss it to his heart's content.

Rod Serling was an intense, chain-smoking workaholic. Two of the most heartfelt and personal episodes are about an overworked man who is overcome by nostalgia for the slower-paced, easier-living world of the past. The town that is walking distance from the hero's malfunctioning car is no doubt based on Serling's childhood home, Binghamton, New York. Note the original score by the great Bernard Herrmann.

This is the other great flipping-out-from-overwork story. This one suggests, disturbingly, that actually being dead is better than living that way. Or maybe the idea is that this nostalgia for the low-pressure world of the past is actually a death wish and should be avoided. We report, you decide.

Even more disturbing than the monster on the wing of the plane (at least for the viewer) is the possibility that no one will believe the hero when he says he has actually seen it.

A marvelous parable about how irrational beliefs can be as enslaving as chains and bars, if not more so. A young man finds himself unable to disobey the advice of a fortune telling machine in cheap diner.

No philosophical point here, just a disturbing story about an airliner lost, not in space, but in time. I vividly remember seeing, probably on the original airdate in February 1961, a certain shot at the end of the episode. It turned out to be the most expensive piece of film made for a TV show up to that time ($2,500). It was a clay animation of a brontosaurus looking up from what was supposed to be New York city. 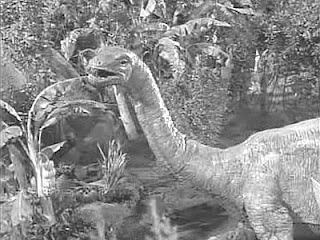 Probably the original inspiration for this one was the idea, common among Cold War liberals like Serling, that right-wingers who make reckless accusations of Communist sympathies are playing into the enemy's hands. We must have national unity! Fortunately, because he was expressing himself indirectly through images and action, this little drama has a much wider and deeper application.

One of the "reversal of perspective" episodes, of which there are many. One remarkable thing about it: until the very end, it contains no dialogue at all.

Is it about life in a PC university? Or the constant pressure to be upbeat and optimistic? Or is it a nightmare vision of a world dominated by the young? All of the above and more!

That was fun, though I had to leave out some of my favorite episodes, including ones that I have written on for publication: "A Quality of Mercy" and "The Purple Testament." By the way, numbers 2, 5, 6, and 7 are discussed at length in "Philosophy in the Twilight Zone."
Posted by Lester Hunt at 8:08 AM

"Living Doll" with Telly Savalas or as the doll says '..my name is Talking Tina and I don't like you." Contains all of the elements of traumatic stress, male impotence, parent-child rivalry, the altruistic notion that we always need to be liked...

There are several episodes in which familiar or harmless objects become somehow menacing or deadly. I suppose that was done partly in order to save money on special effects, but for some reason it does seem a peculiarly creepy thought -- the idea of being attacked by a doll, or your electric shaver, or your own car, etc.