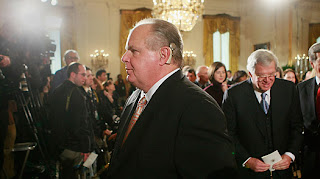 All week I have been trying to figure out the left's curious fascination with Rush Limbaugh, and I just now think I figured it out.

As you probably know, it spiked when, last Monday, news leaked out that he was part of a group of investors who are bidding to buy the St. Louis Rams. Immediately, there was a wide-spectrum establishment media blitz in which an array of people attributed to him some absolutely vile racist comments, one saying that the monster who killed MLK should get a medal, and another saying that slavery had its good points because at least it kept a bunch of criminals off the streets. When these quotes turned out to be complete fabrications -- the source being a vandalized Wikipedia page -- few of these people came out with retractions or apologies. Meanwhile, Limbaugh was fired from that consortium of investors.

Why this never-ending campaign against Limbaugh? And why (as we hear from Time magazine) is it vigorously encouraged by very high-ranking members of the Obama administration? It's as if their hatred of him is literally boundless.

What the Hell? He's a radio talk show host, fer Chrissakes! He obviously has no influence on anyone outside the approximately 30% of Americans who already agree with his conservative views. Don't the administration and its friends in the media have more important things to talk about? You know, things like the threatened end of the dollar, the continually worsening economy, or the fact that the Taliban may already have won the war in Afghanistan?

The realization I just had is that actually this obsession may have little to do with sincere hatred.* These folks are simply applying Saul Alinsky's Rules for Radicals, a cynical and mean-spirited book in which Alinsky -- who has long been one of Obama's heroes, and one of Hillary Clinton's as well -- explains his methods for bringing about social change. Specifically, they are applying the last rule in Alinsky's list:

RULE 13: Pick the target, freeze it, personalize it, and polarize it. Cut off the support network and isolate the target from sympathy. Go after people and not institutions; people hurt faster than institutions.

In the present case, this means: 1) Pick your institutional target. For better or worse, the Republican Party is the only institution with any real power that stands in the way of the administration and the left. 2) Put a human face on it. They chose the unattractive, already unpopular face of Rush Limbaugh. If they can just make this mask stick to the Republicans, they won't have to discuss them, much less any ideas that they may or may not stand for. 3) Isolate this human proxy from anything that would make it morally or emotionally legitimate. The National Football League is an institution for which many Americans have some respect and which they take half-way seriously. (Whether this is foolish or wise is irrelevant here.) Limbaugh must not be allowed to involve himself with any such institution. The line about him has to be that he is an isolated hate-crazed nut that no one you respect would have anything to do with. Thus, as silly as this might sound at first, it is actually important that he not be permitted to buy a share in an NFL football team.

I think this sort of strategy fails in the long run. However, I have to point out that I am prejudiced. For decades I have worked at helping young people understand ideas, theories, and arguments. Ideas, I have always assumed, are extremely important. If this sort of strategy represents the correct way to connect with the minds of your fellow human beings, my life has been a big fat mistake. So bear that in mind when I say, I think this will fail. However, perhaps out of wishful thinking, that is what I believe.
__________________________________
* Maybe I should qualify this: it may not depend on sincere hate. For hate there surely is. Note, for instance, Chris Matthews' recent on-air comment, about Limbaugh, that "at some point somebody's going to jam a CO2 pellet into his head and he's going to explode like a giant blimp. That day may come. Not yet. But we'll be there to watch." I wonder why no one seems to worry that this "climate of hate" might result in violence.
Posted by Lester Hunt at 7:52 PM

For so many years Limbaugh has spent his time on the radio mis-labeling or mis-characterizing others . Finally he had his judgment day.

So yours is a case of sincere hate, I take it.

It's no surprise that trying really, really, really hard to be provocative sometimes results in provocation. Whether he's a bad faith provocateur or genuine, he must know that what he says is, in our society, pretty pungent, sharp stuff, stuff bound to engender anger in proportion to that which he vents. And when you make libelous accusations, true or not, a reaction is often produced. If there were leftist pundits with balls as brassy (Olbermann might be closest, but he's still a shout's distance behind), the same mechanism would likely be in effect, or made to be so.

I've never understood the frothing-at-the-mouth hatred of Rush Limbaugh. I personally have never heard his radio show, I have read a number of written editorials by him, and they struck me as forceful, frank opinions, but by no means over the top in any respect. Maybe his radio show is different? I find it very ironic that the only information about the content of his radio show I ever receive is from my leftist friends who seem to listen to him faithfully. If it makes them so angry to hear his views, why are they listening to this show all the time? Just turn it off. Other people apparently enjoy him and should have a right to listen to him. And yes, I also wish Obama would stop campaigning and start thinking about real issues like the health of the US dollar and the obesity of our deficit.

I doubt that he is trying to be provocative. Rather, he is throwing red meat out there for that 30% constituency of his and they are snapping it up. Anyone else who listens in is basically eavesdropping. Like Ann, I've always wondered why lefties pay so much attention to him. He's not talking to you. I agree with her: just turn him off. That's what I do!

To me, he sounds no worse than his lefty counterparts. (I'm speaking from scant information here because I find them all too boring to listen to.) Surely, he has never said anything remotely like
Chris M.'s comment about shooting Rush in the head. If he had, every person on the planet would have heard about it ad nauseum.

No. The point of libelous accusations is that they affect their targets against their will. If I exhort people to suspect their neighbors of this or that for whatever reason, the social dynamic between my listeners (assuming they take my words to heart) and their neighbors is affected with or without the complicity of their neighbors.

So your point is that, in talking to conservatives as he does, RL encourages them to be less benevolent toward and less trusting of liberals, and that this can be a bad thing for liberals. I think you are right about that. But this is consistent with my claim that he is not trying to provoke the left and is not even talking to them, and that there are prominent people on the left who are producing the same sort of intellectual pollution and spewing it in the opposite direction.