The Public Option is not Optional 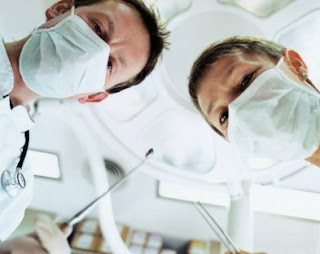 The term "public option" is a clever piece of propaganda. It underwrites equally slippery bits of sophistry. Wouldn't you like to have the opportunity to choose between private and public insurance? Don't you like having choices?

Look, either this government insurance company will "pay its own way" (with money collected from customers) or it will not. If it does, it is pointless. It is just another commercial enterprise (though a non-profit one). If it is a good idea, why hasn't the market come up with it all ready.

If it does not, you are forced to pay for it. That is not an option.

Yet everyone calls it the public "option." On that point, its proponents have won the propaganda war. Yet there is one aspect of this that pleases me. It shows that the proponents of coercion and compulsion find it helps their cause if they sound like libertarians. Isn't that the sincerest form of flattery?

"If it is a good idea, why hasn't the market come up with it all ready."

Obviously, such things are antithetical to markets driven by profits. I, myself, like how libertarians use the words "choice" and "freedom" to pursue a pro-business, anti-people agenda, something which their wounded egos undergird incessantly with strawman arguments (which they themselves must believe or else admit that they are nothing but resentful children who now wear ties). If this plan is pushed through, and manifests it potential, millions of people will be lifted out of the misery lacking insurance gives the unfortunate. Just because someone isn't party to that circumstance does not mean they're 'better' or somehow free of responsibility (the tacit, solipsistic bottom of all modern libertarianism). Have a little care for your fellow human beings. You are not in this world alone and other people feel pain too. Sorry, I'm just expressing my opinion, like Rush.

"Obviously, such things are antithetical to markets driven by profits."

This is simply not true. There are quite a few commercial enterprises that are employee-owned, or consumer cooperatives, and there are non-profits all over the place. They exist for the same reason that conventional profit-making corporations exist: because there are enough people who find that they gain by dealing with them.

As to your insulting comments about whether I care about my fellow human beings: virtues like charity and generosity are only shown in giving to others what belongs to you. Giving the property of others is not generous, charitable, or caring.

While we are making moral judgements, I'll just ask you to guess what I think of people who insult others under the cover of anonymity.

I agree w/ your point on the "propaganda war." Same applies to "net neutrality."

In the industry said...

"If it is a good idea, why hasn't the market come up with it all ready."

The market did come up with this idea. Most insurance companies used to be "mutual insurance" companies. (Remember "Mutual of Omaha" that used to sponser the TV show Wild Kingdom?)

In a mutual insurance company, the insured own the insurance company. They pay premiums to cover costs (including claims and administration) and are paid back returns based on investment returns and better than expected profitability.

What we are left with today is a situation where corporations took over the insurance industry, and are now fighting to prevent the insured from taking it back.

Lester Hunt said...
This comment has been removed by the author.
11:47 AM

Mutual of Omaha is still alive and kicking. I'm no expert, but I do remember reading some years ago that most insurance companies were at the time consumer coops. Yet today, that option does not seem to be available in health insurance. Could the reason be that the legal environment for health insurance is completely different from that of other forms of insurance? I suspect it is. Here is an article that says that the tax code is the reason:

Here is another article arguing that government policy today makes health insurance work quite differently from the rest of the insurance industry:

In the industry said...

Health insurance is indeed quite different than other forms of insurance. That is why there is such heated debate about how to best provide it. There are two inherent differences that immediately come to mind.

The business end of health care is by nature a coercive negotiation. When you are having a heart attack, you are in no position to negotiate prices for services, or shop around for alternatives. Except for the most fatalistic of people, you certainly don't have the option to walk away from the negotiation. An insurance provider should be in a position to objectively negotiate on behalf of the insured but that then leads to the issue of the definition of limits of care they will cover. The Heritage article you cite says HMOs should be eliminated for that very reason. Look at the cries of "death panels" and the outrage when a panel of doctors said there is no medical benefit of annual mamograms for most women under 50.

The same is not true of property insurance and reasonable terms can be worked out much more easily.

The other difference is that our culture has decided that life is invaluable. If a car requires too much work to repair after an accident, the insurance company will simply pay the current value of the car. Even if it can be repaired, the payment is limited to the depreciating value of the car. Lifetime caps on health care coverage are one of the areas a vast majority want to eliminate. Again, "death panels" vs no cost controls.

The Heritage Foundation wants co-ops, but only if the system can be gamed for tax free investment profits. (I'll make a co-op that charges large premiums to cover claims, invest it, and return high paybacks tax free when they exceed claims.) And they want to limit them to local oversight because local officials are easier and cheaper to buy off.

The Ayn Rand group wants to eliminate HMOs and only allow fee-for-service. That sounds very anti-market to me.