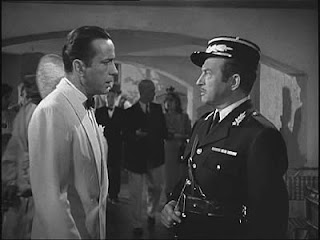 This week's Louis Renault Memorial Award for Phony Outrage goes to the congresspersons and administration apparatchiks who are shocked, shocked by those big AIG bonuses.

A short while ago, they made sure that AIG execs do not have to face bad consequences when they make bad decisions, and now they allegedly are stunned beyond words to see that AIG doesn’t seem to be behaving very responsibly. They even inserted into the stimulus package an "exception for contractually obligated bonuses agreed on before Feb. 11, 2009." Now they are amazed when such bonuses, and big ones, are made. Who would have thought this could happen?!

Well, one thing that is going on here is pretty obvious. People are starting, at long last, to get angry about the "too big to fail" racket, and these guys are trying to deflect anger from themselves. Look, don't get mad at me! I'm as upset about this as anybody! Really! Watch this -- Grrrrrrrrr!

I think there is another element to this, a more sinister one. Notice what the target of this redirected anger is -- those evil capitalists. This other element floats to the surface in these words, spoken today by Barack the Great:

People are rightly outraged about these particular bonuses, but just as outrageous is the culture that these bonuses are a symptom of that have existed for far too long; a situation where excess greed, excess compensation, excess risk taking have all made us vulnerable and left us holding the bag.

And one of the messages that I want to send is that, as we get out of this crisis, as we work towards getting ourselves out of recession, I hope that Wall Street and the marketplace don't think that we can return to business as usual. ...

The financial regulatory package that we're designing as well as the economic policies that we want to put in place are going to put an end to that culture.

I take this to mean that on top of the unprecedented amount of our money the government is going to spend to bring about results it wants, it is also going to reshape our world by slapping a whole bunch of new rules and regulations on the private sector. And we will support it because we are mad, not at the people making the new rules, but rather at the people who will have to follow them.

I can't be too pessimistic as long as the market -- evil capitalism -- resists the Obaminator... This is after all America and I choose to believe there are a majority of Americans who are outraged at big government and are pro free market.