The New Relevance of Atlas Shrugged

Copies of Atlas Shrugged are flying off the shelves. In January its average sales were three times those of a year earlier, and the 52-year-old novel was outselling Obama's latest autobiography. As you can see in this graph, spikes in sales of the book coincide with specific events in the news.

I've been rereading it myself, and keeping a mental list of the points of similarity between the novel and our world, which I'm writing out here. (As more similarities pop up in the news, I will return to add them to the list.)
Of course, there are some huge differences between the situation in the novel and the current 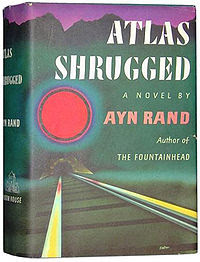 one in our world. Our collapse, in my humble opinion, was the result of a previous artificial boom based on credit expansion (which was triggered, indeed deliberately supported, by the government - which now continues to force debt on us when we are already buried under it). In the bust that follows such a boom, many business decisions that were made under the misleading conditions of the boom are now revealed to have been mistakes (AIG's overindulgence in credit default swaps, eg.). Some of the schemes exposed by the bust were downright ciminal (obvious example: Madoff). For this reason, the private sector looks more responsible for the collapse than was the case in the novel, making the government's power-grab look more legitimate.

Clearly, the greatest relevance to events today is in terms of fundamental principles and concepts. Government is viewed as a giant extraction device, in which wealth is taken from those who produce it and given to those who do not. Since the system rests on the backs of people it is sacrificing, it can only exist as long as its victims support it. Perhaps, one fine day, they will have had enough.
Posted by Lester Hunt at 10:56 AM

"For this reason, the private sector looks more responsible for the collapse than was the case in the novel, making the government's power-grab look more legitimate."

Sadly the Gov't played "Mickey The Dunce" ala Sen Dodd, because they were the beneficiaries of the "expanding economy" based in "vaporware" economics. The increased tax revenues of transaction fees from loans and house swaps filled the tax coffers and corporate profits became huge bonuses that "trickled down" in the campaign funds of the "elected" who "wrote" and legalized these false laws. Like any incestious relationship, a mutuant gets created which grows up and comes back to bite. It far exceeds any fiction even Rand could have written.

"Our, collapse, in my humble opinion, was the result of a previous artificial boom based on credit expansion (which was triggered, indeed deliberately supported, by the government - which now continues to force debt on us when we are already buried under it)."

no opinion necessary. This is fact and it's ridiculous how ignorant the nation is (as well as the government).