A while ago, I commented briefly and with alarm on this bizarre clip in which BHO, speaking through a drizzle of applause, calls for a civilian security force, "just as powerful" and just as expensive as our combined military establishment.

Just consider how well-funded our military is. Here is America's military budget compared to the rest of the top ten best-funded military establishments on earth (click to enlarge): 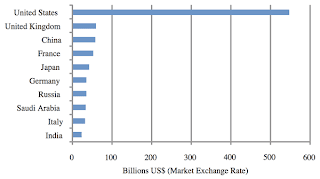 And the other day, he seemed to be bringing it up again, in a speech at the National Defense University:

And that’s why my administration is committed to renewing diplomacy as a tool of American power, and to developing our civilian nationanl security capabilities… … We have to enlist our civilians in the same way that we enlist those members of the armed services in understanding this broad mission that we have.

What the heck is he talking about? I can't seem to come up with an interpretation of this that isn't horrible. Here is one right-wing radio commentator wondering about it:

I think he makes a good point: you'd think our so-called journalists would at least ask for an explanation, but they don't seem to be doing that. (By the way, people like him would have a lot less influence if mainstream journalists just did their job.)

Can anybody help me with this? Just what is BHO planning on doing, and why?

Later: I think I might have an answer to my question, at least the "what" if not the "why"? Here is a quote from the Obama/Biden campaign literature:

Obama and Biden will set a goal that all middle and high school students do 50 hours of community service a year, and will establish a new tax credit that is worth $4,000 a year in exchange for 100 hours of public service a year.

But why would this be called a "civillian security force," or anything like that? The answer is suggested by another quote, this one from Rahm Emanuel's book, The Plan: Big Ideas for America (BTW, right now, I can't think of a scarier book title, except of course for Mein Kampf):

Here’s how it would work. Young people will know that between the ages of eighteen and twenty-five, the nation will enlist them for three months of civilian service. They’ll be asked to report for three months of basic civil defense training in their state or community, where they will learn what to do in the event of biochemical, nuclear or conventional attack; how to assist others in an evacuation; how to respond when a levee breaks or we’re hit by a natural disaster. These young people will be available to address their communities’ most pressing needs.

(Source of these quotes.) So perhaps the idea is to force young people, without pay, to get in harm's way in the event of various sorts of "attack." I suppose the government might come to find this idea particularly attractive in the event that they come to expect violent demonstrations, tax revolts, food riots, and civil unrest here in the US during the next few years.

I think this is a really frightening idea, if this is what the idea really is. I'll try to blog about the ethics of this sort of involuntary servitude soon.
Posted by Lester Hunt at 9:42 AM

Maybe it's step one to reinstitute the draft. Russia is talking about conscription again. Americans are already super volunteers, why in the world do we need government money for this sort of crap. You know these programs would have political agendas. Is it four years yet? Is it two years yet?

I agree that the phrase "Civilian National Security Force" sounds ominous--and budget busting--but I suspect it was just a poor word choice and a bit of hyperbole by then Candidate Obama. Notice how the more recent NDU speech substitutes "capabilities" for "force."

Here's some context from the National Security Strategy document that Gates released last summer. In a section titled "Integrate and unify our efforts: a new Jointness," Gates notes that "Our efforts require a unified approach to both planning and implementing policy. Iraq and Afghanistan remind us that military success alone is insufficient to achieve victory. . . . The Department of Defense has taken on many of these burdens. Our forces have stepped up to the task of long-term reconstruction, development and governance. The U.S. Armed Forces will need to institutionalize and retain these capabilities, but this is no replacement for civilian involvement and expertise. The United States must improve its ability to deploy civilian expertise rapidly, and continue to increase effectiveness by joining with organizations and people outside of government – untapped resources with enormous potential. We can make better use of the expertise of our universities and of industry to assist in reconstruction and long-term improvements to economic vitality and good governance. Greater civilian participation is necessary both to make military operations successful and
to relieve stress on the men and women of the armed forces. Having permanent civilian capabilities available and using them early could also make it less likely
that military forces will need to be deployed in the first place."

Gates is, in part, voicing a frustration long felt in the military. There are many, many military members doing jobs in Iraq, Afghanistan, and elsewhere that would be better done by skilled civilians--if resources and sufficient volunteers existed. (Whether anyone from the US should be doing those jobs at all is an issue for another post.)

Now return to Obama's speech. Immediately before the unfortunate "Forces" comment, he was speaking of doubling the size of the Peace Corps and expanding the Foreign Service, obviously as examples of an expanded nonmilitary "national security" capability. He has also listed the following initiatives on the White House website, under the rubric "Develop Whole of Government Initiatives to Promote Global Stability." Initiative #1) Integrate Military and Civilian Efforts: The Obama-Biden Administration will build up the capacity of each non-Pentagon agency to deploy personnel and area experts where they are needed, to help move soldiers, sailors, airmen and Marines out of civilian roles, and #2) Create a Civilian Assistance Corps (CAC): Obama and Biden will create a national CAC of 25,000 personnel. This corps of civilian volunteers with special skill sets (doctors, lawyers, engineers, city planners, agriculture specialists, police, etc.) would be organized to provide each federal agency with a pool of volunteer experts willing to deploy in times of need at home and abroad.

This whole thing simply strikes me as Obama wanting to engage the world with more people in suits or shorts bringing medicines, urban planning expertise, agricultural assistance, and so on, rather than having the US military be the public face of America in so many regions.

Perhaps we ought ask whether America should be engaged globally to the degree it is. But should it remain so engaged, then less military and more civilian presence--more soft power, as the term goes--could be a worthwhile move.

That makes a lot of sense. Basically, it sounds like a beefed-up Peace Corps. When I was a kid there were plenty of people complaining that the US was committed to being the "policeman of the world": that it is impossible to do so successfully, and that a really serious attempt would destroy us economically.

Now that it is becoming clear that this police-man-of-the-world thing is probably just the sort of disaster its harshest critics have always said it is, the solution proposed to to do even more. It is one more example of an expansion of government power leading to even greater expansions of government power (the latter being an attempt to patch up the nasty consequences of the former). Policeman of the world doesn't work, so lets try policeman-plus-nanny of the world.

It's both sensible and insane at the same time. Like so much that happens in government.

I recently came accross your blog and have been reading along. I thought I would leave my first comment. I dont know what to say except that I have enjoyed reading. Nice blog. I will keep visiting this blog very often.