Saturday night in Chicago Deborah and I saw for the first time the great operatic double bill of Caveleria Rusticana and Pagliacci.

Above is Caruso singing Vesti la giubba. As every schoolboy knows, this monologue (aria seems not quite the right word to me) represents the principal character in Pagliacci having discovered his wife in the arms of a more attractive man. Now he is forced by circumstances to appear in a commedia dell' arte play presenting, by coincidence, a clownish version of the humiliating events that have now devastated him. This is a combination of circumstances from which no good can come! [Lyrics, from Netlog, below.]

Both these works are founding documents in the Italian movement in the arts called verismo (roughly, Realism). The descendants of Italian verismo in our culture inlcude the ganster films of Coppola and Scorsese, and David Chase's The Sopranos. Originally, verismo was a direct application of the Naturalism developed in France by Emile Zola. One thing these works suggest is that nineteenth-century Naturalism was really an offshoot of Romanticism. In Naturalism, human beings are mere chips of wood floating on a sea of forces far beyond their control, generally passions like love, and the hate that love often engenders. In McTeague, by the Frank Norris (the American Zola) the passion involved was greed (which became the title of the story when von Stroheim turned it into a film). There is nothing for it but to play out the terrible logic of these forces. Turiddu must betray, Santuzza must grieve, Alfio must rage and kill.

Such a view was often not far from the heart of Romanticism, was it? Wagner built a great monument to it in Tristan, and he might be regarded as a Naturalist, at least in that work. Norris claimed that Naturalism is a sort of Romanticism.

I find it hard to explain why I find works like this appealing. I even read a couple of Norris novels and liked them, as art (I found the distortions of history in The Octopus 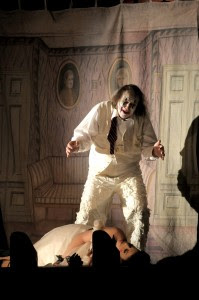 despicable, but that's not a matter of aesthetics). I certainly don't think the world works in the way that they say it does. Nor do I wish things were that way. Who would?

Maybe it's because there is a grain of truth in this view of the world. Love means exposing yourself to influence from demons that rule from within, it means giving up some control over one's life. Passion leads we know not whither, and some of these places are not so good. The Cav-Pag/Tristan/Carmen view of love is probably as close to the truth as the hearts-and-flowers routine that we are used to. That is why it requires courage.

Or maybe it's because the world that verismo presents us with is interesting. A world that is completely controlled by burning love, raging greed, and screaming jealousy would be at least as interesting as ... well, as the one we actually live in, which often seems to be ruled by bottom lines, vote-counts, and public opinion polls.

To recite! While taken with delirium,
I no longer know what it is that I say,
or what it is that I am doing!
And yet it is necessary, force yourself!
Bah! Can't you be a man?
You are "Pagliaccio"
Put on the costume,
and the face in white powder.
The people pay, and laugh when they please.
and if Harlequin invites away Colombina
laugh, Pagliaccio, and everyone will applaud!
Change into laughs the spasms of pain;
into a grimace the tears of pain, Ah!
Laugh, Pagliaccio,
for your love is broken!
Laugh at the pain that poisons your heart!
Posted by Lester Hunt at 12:38 PM

How appropriate in these times of such denial!

Take the bailout money!
And yet it is necessary, force yourself!
Bah! Can't you be a man?

You are "Chief Operating Officer"
Put on the costume,and the face that snorts white powder.

The people pay, and laugh when they please.
It's their granchildrens' debt to repay!,
and if Harlequin invites away Colombina laugh, Pagliaccio, and everyone will applaud!

Change into laughs the spasms of pain;into a grimace the tears of pain,

Laugh, Pagliaccio,
for your love is broken!
Laugh at the pain that poisons your heart

Change into laughs the spasms of pain;
into a grimace the tears of pain,

Ah! Pay yourselves those performance bonuses!

Sometimes you get the luxury of a Real Bad Guy, which gets your hopes up that there could be an Objectivist opera (Fidelio had a fighting chance at it, but I've noticed Objectivists not really caring for Beethoven--haven't you?)

But in Italian, even with the Bad Guy you get the mistaken identity, or the undelivered message, all this romanticism getting in the way of the Romantic.

I saw Salome today (so many churchy-looking people there, I wondered if it was recommended by clergy as a pre-Easter treat). There, only the Baptist is truly bound, unless you count Salome's untenable political position, domination by the Patriarchy, or raging hormones, and surely it's taught that way somewhere.

At the very least, it's the best $29 pole-dance you can take your wife to. --comatus