Another Gross Fallacy from Obama 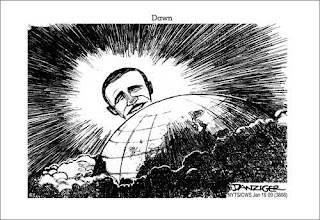 Monday, a reporter from the NY Times asked Obama, "The first six weeks have given people a glimpse of your spending priorities. Are you a socialist as some people have suggested?" From what I have heard, BHO merely laughed out loud, got into his helicopter, and flew away. Later, he thought better of it and called the reporter. He had this to say:

"I did think it might be useful to point out that it wasn’t under me that we started buying a bunch of shares of banks. It wasn’t on my watch. And it wasn’t on my watch that we passed a massive new entitlement -– the prescription drug plan -- without a source of funding. And so I think it’s important just to note when you start hearing folks throw these words around that we’ve actually been operating in a way that has been entirely consistent with free-market principles and that some of the same folks who are throwing the word 'socialist' around can’t say the same."

I have a hard time making logical sense of this. He seems to be arguing that the Bush administration was socialist (which of course is true) to the conclusion that his is not. Aside from the fact that the premise contradicts his earlier line that the Bush years were a period of laissez faire capitalism, this argument seems to be a gross example of the fallacy of argumentum ad hominem: that's the one where you answer an argument by attacking the person who is making it. The underlying idea is nothing this tainted source says could be cogent or true, no matter how it might sound at first. Pay no attention to them.*

In fact, it is a particularly inept use of the fallacy. Everyone knows that it is not merely members of the disgraced Bush administration who are making this accusation. Also, the trait that is supposed to put his accusers beyond the pale -- being socialists -- is obviously not something that Obama really thinks puts anyone beyond anything.

Aside from the obvious ethical and logical objections to this sort of talk, this just seems dumb to me. For a year now I have been hearing how intelligent BHO is. (When I googled the words "Obama brilliant" just now, the service came up with 11,100,000 results in .11 of a second.) Where are the signs of this intelligence? I just don't see it. True, his campaign was brilliant, but now we are in a very different sort of context. Note that the brilliance of the campaign had absolutely nothing to do with the intellectual content of anything he said about the issues. And now, the campaigner who never made a mistake has become the president whose every move is either a mistake or a cliche. It turns out that the skill-set needed for campaigning is separable from that needed for running an organization in times of crisis, or for having a rational conversation about the tremendous issues that now hold us transfixed with horror.

God help us all.


And now, for a more enlightening (and, come to think of it, less frivolous) comment on the New Socialism than anything we are likely to hear from BHO, take a look at this link.

Good catch! This is fascinating. Obama's argument initially appears to be:

Is that what's going on here? Because then how do you make sense of him saying that "some of the same folks who are throwing the word 'socialist' around can't say the same"? This suggests:

6) The instituting of massive entitlements and interventions is not consistent with free-market principles.

So there appears to be a contradiction, if I understand the argument correctly. If there's an error in my interpretation, I imagine that it's in thinking that Obama's claim about acting on free-market principles is connected with the rest of his statements; he may just be coming from left field, in which case I'd think he needs to provide one heck of an argument in his favor. But in any case, though, thanks for pointing this out -- my head officially hurts!

Maybe the problem is that BHO is just too "brilliant" for the likes of us.

BTW, when I googled "Obama gibbering ninny with the brains of a toad" I came up with only 12 results, none of which contained all those words.

Man, maybe someday I'll be able to manage such glorious intellectualism... I can dream, can't I?

Thankfully, now when anyone searches for "Obama gibbering ninny with the brains of a toad" on Google, they will come directly here! You've made the world a better place!

You guys are being willfully dense. Obama is simply saying that the word "socialist" wasn't being tossed around when the Bush administration did the same things that are now being called "socialist" because the Obama administration is doing them. He is reacting to the word being used as an epithet, not as a defining aspect of the policy. It may be entirely fair to call Obama's policies socialist, but there is a lack of consistency in the media about this.

That may well be the best interpretation, but it makes what he is saying at least as cynical or stupid as the interpretation we are struggling with.

Since October, the Bushama administration has been giving America its biggest shove towards socialism (or some form of statism) since the 1930s, and to refuse to discuss that issue on the grounds that those raising it are being insincere or inconsistent in doing so is just another example of the ad hominem fallacy. Further, the premise is obviously false -- plenty of people were screaming about it during phase one of this push toward whatever-we-should-call-it. I sure as Hell was -- look at my posts for late October and early November if you find that hard to believe.

In what way is the ad hominem argument you attribute to him different from the one I attributed to him? Mine has him admitting the Bush part of the Bushama regime was socialist. Yours has him (apparently) not caring. That's the only big difference I can see.

[For what it's worth, I think the system we are now entering is not socialist but fascist -- but the difference between them is one of the many things we can't discuss if we think of one of the crucial terms as a mere "epithet."]