Obama's Rhetoric is Winning the Race 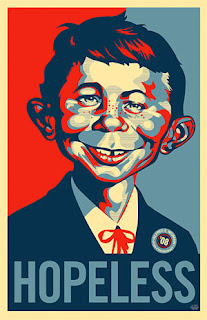 The intellectual level of public discourse in this country seems to be sinking lower and lower, and recent presidents have being doing their share to drive it lower still. G. W. Bush communicated ideas, if you could call them that, that corresponded, not to complete sentences, but to vague, detached phrases, like "compassionate conservatism. As far as I know, there was never a proposition behind that phrase, stating what it meant with any precision.

Obama goes much further, expressing -- okay, now it is obviously wrong to call them ideas -- expressing urges and hankerings that are embodied, not even in phrases, but in monosyllabic words, like "hope" and "change." It's as if his target audience is a mind far more rudimentary than that of a ten year old child. His audience seems to be a guy who is falling asleep in front of his TV, and all he can grasp is an occasional word. He can no longer absorb complete sentences, like "I hope I can stimulate the economy by creating a trillion dollars of new debt" or "Let's change America into France, but without the great food and fine art." All his nearly-shut-down brain can absorb is "... hope ... change ... zzzzzzzzzzz."

Now Obama has declared that "the leader" of his opposition is Rush Limbaugh, setting off a snarling dogfight among his opponents. A lot of conservatives in the chattering classes say this is a diversionary ploy. He wants people to be talking about Rush and not debating about the fact that grampa's retirement fund has just evaporated, or that our children now owe his government a trillion dollars they didn't owe before.

I think it is worse than that: he believes this is how you argue about the stock market and the national debt. If you can just define your opponent as someone who is already unpopular, you win. End of debate.

What he is practicing is a form of the "straw man" fallacy. Instead of attacking your opponent's position, attack a related one that you are sure you can defeat. End of debate.

This is something he has done consistently. He got where is is today by campaigning against that gang of laissez-faire de-regulators, the Bush administration (a completely imaginary opponent). Since then, he has consistently contrasted his spend-ourselves-rich policy with that of those who want to "do nothing" about the current depression, who want to let the market correct it. During his first press conference, he mentioned those ("and I don't doubt their sincerity") who want to privatize education. Oddly enough, the subject under discussion at that moment was not education. Where the heck did that come from?

When I first noticed this pattern, I was slightly flattered by it. These extreme positions that he is referring to are all ones that I hold. (I am one of those laissez-faire deregulators that your mother warned you never to take candy from.) BHO's rhetoric at first reminded me of that moment when Mussolini claimed that this point of view -- at that time, it was called "liberalism" -- was the exact opposite of fascism and therefore the real enemy:

The foundation of Fascism is the conception of the State, its character, its duty, and its aim. Fascism conceives of the State as an absolute, in comparison with which all individuals or groups are relative, only to be conceived of in their relation to the State. The conception of the Liberal State is not that of a directing force, guiding the play and development, both material and spiritual, of a collective body, but merely a force limited to the function of recording results: on the other hand, the Fascist State is itself conscious and has itself a will and a personality.

To me, this is a sort of back-handed compliment (which is better than no compliment at all!). But coming from Obama, it is no compliment, no matter how back-handed. He is not mentioning these views because he means to defeat them. He thinks they are unpopular with voters (which of course they are) and therefore don't need to be defeated.

There is probably no way to have a rational debate with this guy in a public forum. It's just not his sort of thing. He will always be doing some supposed-to-be-clever rhetorical dance instead.

If you think that the president's job is (inter alia) to provide moral leadership, to be an example for others, and to conduct a national conversation on the great issues before us, you should see this as a real tragedy.
_______________________________________
As to Limbaugh and conservative talk radio, I think it has been a disaster for the country in recent years, mainly because these people were major enablers of the catastrophic Bush administration, as John Derbyshire explains here. For eight years these guys did little but cheerlead for big spending, fiscal irresponsibility, and megalomaniacal imperialism. Ron Paul offers similar comments here.
Posted by Lester Hunt at 2:15 PM

Attacking Limbaugh is a mistake, because the President is lowering himself to fighting a talk radio host.

My guess is Obama is stressed out, battered by recent events, feeling a lack of control and just needs to establish his authority. Alas, his chosen opponent is too small beer to instill confidence in onlookers.

Well, that's the most charitable possible interpretation. According to some accounts, though, Operation Rushjob is very much a team effort -- which would seem to mean that it reflects the corporate culture of BHO's whole organization.

Right now, I'm going to read one of JFK's speeches, just to clean my brain out. (Seriously!)

Honestly how can we expect one person to provide the guidance and expertise to fix the economy when his background is in organizing people at the community level which seems like a good prerequisite only if you consider this country that way. In reality Obama is like a swinging punching bag being punched at by his own party's political agenda, the Fed's ideas, labor, the press and popular opinion. He said he ignores daily market swings but in reality he'd like to ignore everybody.

I've always believed a lot of Obama's appeal has been due to the carefully managed image he has succeeded in putting out to the public. I understand he doesn't allow the press to photo him with a cigarette - and the infatuated lot of them are complying it seems. I'll bet he smokes a hell of a lot more than an occasional fag - probably two packs a day. POTUS is a stressful job.

The next point is a little off-topic, but I've really been wondering about it; why is Michelle Obama so nearly invisible as First Lady? She is, isn't she? And she's tall, good-looking, stylish, highly educated, admired by so many. You'd think Obama would have her out there is some PR capacity, to smooth the edges of these rough times. There are many roles she could in theory play that would in no way remind anyone of the two-Clinton presidency that Hillary sort of tried. I wonder if Michelle is being heavily medicated for depression. This is ONLY a conjecture on my part, but I've noticed in a few public photos in the past, she has a disconnected, low energy expression - politicians and politicians' wives are masters at masking this sort of emotion. They always look 'on and ready'. I only mention this, because if there is anything at all to it, it's one more way in which the Obama image might be being 'managed'. Controlled images succeed so long as they hold together - if this one starts to come unraveled - watch out! There will be a feeding frenzy on Capitol Hill. I'm sorry that I'm so cynical, but I think our government is, by and large, a despicable lot these days. The criminal class that Mark Twain spoke of. There may be a few good souls in the crowd.

I can't say I was ever hopeful over having a new president, but at least it cheered me up to see the back of Bush, the younger. All I've seen so far is a continuation of his public bailout policies.

How is it that everyone pays lip service to laissez-faire but they can't stand to have anyone laisser-tomber?

I feel sandwiched between a privileged class whose financial talents require that they bring home $30M/year, win or lose & masses of the unemployables whose greatest contribution to the economy is to spend food stamps in support of the socialist heartland of the American farm belt.

In a laissez-faire system, rich people take real risk in the hope of reward. Poor people exercise ingenuity or die of starvation & attendant diseases (& thereby "decrease the surplus population"). It's wasteful in the same sense that Nature herself is wasteful, but at least it's simple & self-correcting.

What strikes me is that no one on the national stage is opposing the plan. Provided that it won't affect passage, you may see some backbenchers playing to the camera for the folks back home, but in the end, the President has to fall back on someone from the entertainment industry to create some public theater around national politics. For all practical purposes, the Democratic-Republican axis is turning in perfect synch.

The real problem goes past the liberal vs conservative, taxes vs tax cuts etc. arguments. The banks built a massive mess with derivatives because this economy no longer builds wealth based on value like the post WW-II generation. Most jobs are in service and distribution (sales, finance, marketing etc.). To build an economy based on house value inflation will no longer work and Obama and all of the dems and repubs know that. In defense of Rush, true entreprenaurial capitalism is still valid but the repubs did very little to promote it but only finger pointed Barney Frank and the dems over the FANNIE-FREDDE mess.