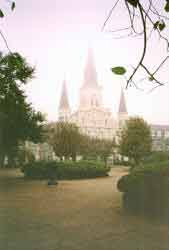 The second anniversary of the disaster of Hurricane Katrina is upon us, and around the nation conversations about what to do about New Orleans are flaming up again. Needless to say, the blogosphere is no exception. Donald Pittenger over at 2 Blowhards has has an interesting post about this. Following Steve Chapman, he suggests and interesting analogy: Another awful hurricane devastated the then-major port city of Galveston Texas in 1900. In effect, the responsible parties decided that, gee, I guess it was a mistake to have a big port city, with a lot of expensive, delicate artifacts perched on a sandspit in a hurricane zone. Houston would be a better choice, as it is well protected from that sort of devastation. And today Houston, and not Galveston, is the major port in the area. New Orleans is like Galveston, Pittenger and Chapman are saying: there shouldn't be a big city with nearly half a million working stiffs like you and me living there, perched between a huge lake and a river, and large areas of it below sea level, in a hurricane zone. Baton Rouge and, again, Houston, are better choices.

I am a long time-time admirer of New Orleans, and of Creole and Cajun cuisine and music. I have been a fan of Joe and Cleoma Falcon, the lamented Clifton Chenier, and Breaux Brothers for decades. I have been known to stuff a Thanksgiving Day turkey with jambalaya. When Paul Prodhomme turned to healthy eating with A Fork in the Road, I turned with him. But I heartily agree with Chapman on this one.

However, a commenter on Donald's post suggests a competing analogy: So you want to abandon New Orleans. Would you abandon San Francisco, what with being in an earthquake zone and all?

This is a tough question for me. San Francisco and New Orleans are my two favorite American cities (Baltimore coming in third). But it seems to me that Galveston is the better analogy. Much of the city of New Orleans was simply a mistake: it only exists because of a government-built levee system which, we now know, government is not competent to maintain and operate properly. San Francisco can probably be maintained in existence by people who for one reason or another are willing to spend their own money doing so. Yes, I know, like the rest of America, San Francisco is on the dole. Probably, lots of government money goes into protecting it from earthquakes. This inevitably means money being mis-allocated (trans.: wasted). But the point is that San Francisco can probably survive on the resources of people who find it profitable or in some other way worthwhile to pay for it. In other words, protecting the whole thing is worth the cost.

New Orleans is an artistic and cultural treasure, and I am very attached to it. But completely rebuilding New Orleans would mean some of us indulging our sentimental attachments and aesthetic tastes at other people's expense. It can only be done by forcing the taxpayers to repair all the bad effects of this government-caused mistake. That's what makes New Orleans a special case. Further, as I understand it, the parts that are below sea-level tend to be the parts that were built after the formation of the modern welfare state -- ie., they aren't the parts that we get all aesthetic about. The old, "core" part of New Oreans is 48% at sea level or above.

Do I want to "let the hurricanes win"? I don't want the bad guys to win, but hurricanes are not bad guys. "Millions for defense but not once cent for tribute" is not a rational way to think about the weather.
Posted by Lester Hunt at 10:13 AM

Although New Orleans does not rate among the top three of my list of most magical cities (San Francisco, Barcelona & Kyoto), I love the Big Easy. I was there in June of 2005, barely two months before Katrina with my sister. We had a fabulous time.

I agree with your cost-benefit analysis regarding re-building of the city. But I think with proper planning, it may not be such a bad idea to rebuild.

Galveston, on the other hand is a completely different proposition. Every time I go there, I shudder to see the mushrooming new developments including million dollar homes coming up a few feet from the shore which according to some estimates is eroding by a couple of feet each year. At some 13 X 2 miles, Galveston is barely more than a sand bar. Yet the building boom continues based on the assumption that in case of a disaster like this one, the insurance companies will quietly pay up. The city government hands out permits like pop corn.