The Bounty: The True Story 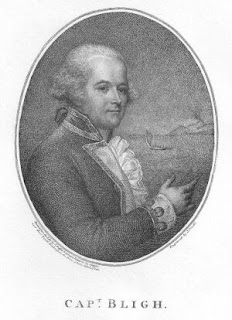 While traveling to San Francisco and back for the Liberty Fund* Ortega colloquium (lots of fun and I learned a lot -- thanks everybody!), I read The Bounty: The True Story of the Mutiny on the Bounty (Viking, 2003), by Caroline Alexander, who wrote the very successful book about Shackleton, The Endurance. It is of course Alexander's account of the most famous mutiny of them all.

I am very impressed. Aside from being a page-turning read (at least if like me you get all romantical about the Days of Wooden Ships and Iron Men), it's also interesting for being a straight up defense of Lieutenant Bligh (who at the time of the Bounty voyage was not yet a Captain). I notice that the review of the book in The New York Times contains the curious statement, "In The Bounty, Alexander doesn't set out overtly to reach a verdict on the mutiny itself." I can't figure out what the reviewer, Verlyn Klingenborg, meant by this. Alexander misses no opportunity to show that Bligh was blameless and Fletcher Christian was just plain wrong. If this isn't a verdict, I don't know what would be. And she is very convincing. She has gone back to the manuscript versions of the surviving logs and diaries of participants -- always a better source than accounts remembered and misremembered after the fact. It has the ring of truth, to say the least of it.

According to Alexander, the notion that Bligh was, by the standards of those days, a cruel disciplinarian addicted to the lash, is simply a myth: ''William Bligh had punished his crew with 229 lashes in the course of a voyage of 17 months to the South Pacific.'' Later, one of the Admirals who managed the court martial of the five mutineers who were brought back to Englaind administered 278 during the mere three and a half weeks of the preparations and aftermath of the trial.

As she tells the story, there was a serious problem with the voyage from the beginning. As every schoolboy knows, the purpose was to go to Tahiti, collect a huge number of breadfruit plants, and take them to Jamaica for transplantation. The admiralty seems never to have taken this trip very seriously. They saved money by refusing to promote Bligh to the rank of Captain for this, his first command, and they gave him an unusually small ship. The Bounty was actually purchased from a private company, which had been using it to ship coal. The superb full-size reproduction built for the not-too-bad (though absurdly inaccurate) 1962 movie was actually 20% more than full size. Worst of all, they refused to give him a detachment of marines to keep order on the ship.

The marines would have been reliably loyal to Bligh and would have had no function other than to use force if need be -- mainly against the crew. Bligh had discipline problems from the beginning, with many petty acts of disobedience or insolence. When they got to Tahiti, many of the men had to live on the island, to collect and take care of the plants. At least half of them pretty much went native, indulging in the then-new practice of tatooing and living in blissful sin with the beautiful and friendly native women. After more than five months on the island, Bligh wrenched the men from this literal paradise of bachelors. The ship's discipline problems predictably got worse. Lacking marines, Bligh foolishly relied on name-calling and fits of rage. Where is that son of a bitch?! Why you are a fool! Damn me if I don't make you sorry! You are a thief! Why damn your blood! Probably the one thing most often said of Bligh was that he did one thing or another "in a passion." Believe it or not, by all accounts the incident that precipitated the mutiny was a tongue-lashing administered when someone took some coconuts, in violation of explicit orders, from a pile of them on deck. Assembling the entire crew, he denounced them all as thieves. Just before dawn the next morning, Christian and an armed cohort seized the ship.

Bligh's real offense was not (by the standards of the day) physical cruelty so much as hurting people's feelings. It's a sort of cautionary fable for the politically correct world we live in today, isn't it?

Of course, as so often happens, different morals can be drawn. One conclusion that jumps out at me is that being thin-skinned can be a seriously bad vice. Because Christian was so upset at being called a thief, various domino-like chains of events were set off that eventually resulted in more than seventy deaths. The mutiny itself was bloodless, but Bligh and the loyalists were set adrift in an open boat, while the mutineers fled justice across the high seas. By the time the resulting hardships, drownings, murders, and executions had taken their toll, the effects of these emotional episodes were more or less horrific.

On the other side, it has to be said that the politically correct crowd has a point. To put the point in terms of Bligh's story... Another thing that was often said of Bligh, other than that he tended to fly into a passion at slight provocation, was that his passions always blew over quickly. He might scream at you one moment and compliment you minutes later. He may have felt that because he had forgotten his last fit of rage, others would of course do so as well. That was a mistake. A big one. Even among the loyalists who traveled over three thousand miles with Bligh in the Bounty's launch, there were probably one or two men who hated his guts. Like it or not, there are thin skinned people out there. Even tough eighteenth-century tars are capable of throwing their lives away over hurt feelings. It's a good idea to mind what you say, is the point.
_______________________
* For reasons that it might be interesting to go into, I've always had a much better Liberty Fund experience than Ann Althouse.