Who Should Speak on Campus? 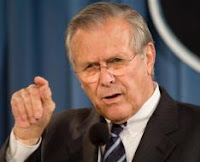 Two furors involving speech at American universities erupted over the last couple of weeks. An invitation to to Mahmoud Ahmadinejad, current President of the Islamic Republic of Iran, to speak at Columbia University eventually resulted in a demonstration by people outside the hall. The demonstrators were objecting to his having been invited to speak. On the other coast, an offer of a one-year fellowship at the Hoover Institution for the Study of War, Revolution, and Peace to Donald Rumsfeld, former US Secretary of Defense resulted in a petition signed by 2,300 Stanford faculty and students, calling for the appointment to be revoked. If it is not revoked, it will require Rumsfeld to come to campus five times during the year and may involve his giving some lectures.

These protests raise some thorny issues. In a way, I guess I would deny that "who should speak on campus?" -- despite the title of this post -- is one of them. In a free society, this question can have no clear meaning. What campus? Who owns it? What is its mission? If the question is whether the Pope should speak, then if this is a Catholic institution the mere fact that he is the Pope is a good enough reason for him to speak here. At another sort of institution, it might not be. Even given the institution and its mission, the question of whether a given person should or should not be invited to speak may be purely a matter of taste and personal preference.

There is a closely related question, though, that I think does have a fairly clear meaning. It is: When, if ever, is it right to protest and demonstrate against someone's being invited to speak at all?

Note that such a protest is not a contribution to the dialog that would take place if they do come to campus. It is an attempt to prevent that dialog from occurring in the first place.

Now those who know me probably think they know what I am going to say next. No one should ever try to prevent any dialog from occurring. Well, not quite.

I can think of three legitimate reasons for inviting someone to come and speak on a university campus. (1) The speaker may possess information relevant to some topic worth discussing, and we may have reason to trust their claims to disclose such information to us. (2) They may possess superior abilities (due to superior reasoning abilities, theoretical knowledge, or moral character) to process this information and come up with new ideas about such a topic, ideas that are worth discussing. (3) Their statements may themselves be useful as data in our ongoing dialog on issues that are worth discussing.

In case (3) leaves you wondering what I am talking about, here is an example. Suppose we are profs in the department of criminology. We may want to invite Joe Blow, a confessed murderer, to come and address us. As a criminal, Mr. Blow's word might not be very trustworthy, but the mere fact that he says it may have some value. It may be distasteful, but studying people like him him is our job and by God we've got to do it.

It seems to me that only reason (3), the weakest of the three, clearly applies to these two speakers. One is a head of state and the other has long worked in close association with heads of state. As such, they are the sort of person who routinely takes the right of free speech away from the rest of us. Both have misled, deceived, or deliberately lied to the public in the past. In neither case does their word have clear and obvious value, except as data.

Do I want to say that neither should have been invited to speak? Well, I'm not entirely sure. I suppose the honest thing to say is that I am not completely without sympathy for the people who are objecting to their being invited to speak, in either case. And it would be pretty hard to feel sorry for either of these guys, in the event that they are denied access to any one academic forum. They've both had opportunities to express their views that are beyond your wildest dreams -- and while they were putting gags, handcuffs, and straightjackets on their fellow human beings.

On the other hand, I think the reasons the objectors give for their objections are often without much merit. At Stanford, Professor Philip Zimbardo, a distinguished psychologist, said that Rumsfeld should not have been invited on the grounds that he "created the conditions" that led to the abuse of prisoners at Abu Graib. "It is unacceptable" he said, "to have someone who represents the values that Rumsfeld has portrayed, in an academic setting."This is, to say the very best of it, just plain silly. The mere fact that someone did something wrong in the past does not mean that they should not take part in an academic discussion. And the idea that whether you should speak in an academic setting should depend on what "values" you have "portrayed" is about as pernicious a principle as one can easily imagine. It would mean that you have to pass a morality test before you can speak.

With somewhat greater plausibility, protesters at Columbia have said that Ahmedinejad should not have been invited because "he is a hatemonger." I don't think this quite makes it as a good reason either. That he is a hatemonger just means that his ideas are obnoxious and offensive in a certain sort of way. But ideas can be obnoxious or offensive and still be worth discussing. More important, shutting an idea out of the dialog, just because of what the idea is, is always a bad idea. Setting up a dialog that in principle will discuss any idea whatsoever is the best way we have of combating obnoxious ideas -- and of deciding which ones are obnoxious in the first place.

An Associated Press article poses the question of whether colleges should allow "extremists" to speak. To say that an idea is "extremist" only means that it is relatively far from the average, the typical, the ordinary. Understood in that way, the question answers itself, doesn't it?

I personally would not have protested against either of these speakers. But if I had been on the committee deciding whether to invite them ... I probably would have voted against both. In both cases, inviting him to speak looks too much like inviting a politician just because he is a politician. Is that a good enough reason to invite someone? If we were entomologists, which would be more informative: attending a lecture by a leading entomologist, or looking at one more bug?
Posted by Lester Hunt at 1:28 PM

I read about Mahmoud Ahmadinejad's campus visit in the paper this morning. Wow! I guess I'm really "up" on my current events.

Your musings reflect my own mobius strip / necker's cube thought process on this sort of thing.

Craig, Nat Hentoff said it best in the title of a book: Free Speech for Me, but not for Thee. Oxy or not, it's moronic.