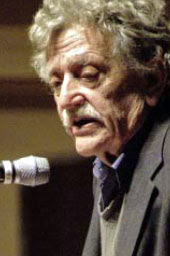 I'd like to add one more thing to my earlier post about Cat's Cradle. The first time I read it, what impressed me the most was the idea that believing lies can actually be a good thing (or at least less evil than believing the truth). This time around, something quite different stood out. The book's end-of-the-world scenario I found really, seriously disturbing. It quite literally gave me nightmares. It's not just that it presents a vivid, plausible story of the complete annihilation of all life on earth. It's the point of view behind it. Spending any amount of time between Kurt Vonnegut's ears, at least as we experience it in this book, is really not very pleasant. (On thing you might get out of the ice-9 fable is a bit of insight into what it would be like to seriously be in the grips of global climate catastrophism. Really believing that sort of thing, should you ever be able to do so, would not be fun.)

People have often pointed out that one thing that is remarkable about this book is that it laughs its way through the end of the world. That's true, but this is not a healing sort of laughter. The impression it creates, for me at least, is one of more or less pure nihilism. The book ends with a creepily Jonestown-like scene in which we find that Bokonon has urged his assembled followers to have "the decency to die," leading them to commit suicide by touching their mouths with crystals that turn their bodily fluids to solid ice-9.

Nihilism, said Nietzsche, is the radical denial of value. It is the pouty teenager's murmur that life sucks. Reading this book reminds me of another Nietzschean theme: how easily extreme forms of moralism, such as Christianity and the closely related idea of socialism (secular Christianity, you might call it), lead to nihilism. Vonnegut was of course no Christian, but he was apparently some sort of Trotskyite.

What is the connection, you wonder? Here is one way to look at it. If you are a real socialist or honest-to-God Christian, you believe in a moral standard to which human beings cannot possibly measure up. Love your neighbor as yourself. Share and share alike with everyone. Care about the whole planet instead of caring about your own self. Shun material gain as the root of all evil. Human beings are apparently hard-wired to not act this way.

Eventually, you will notice this. If you happen to be a genius, this realization might drive you to become a brilliant social satirist, like Vonnegut. But what will the resulting point of view be? You really have a choice. You can choose life and reject your "principles." Then of course you are no longer a hyper-moralizer, a Christian or socialist. On the other hand, you can keep your principles and decide that life sucks. There are two types of hyper-moralist: those who have made the life-sucks choice, and those who have not yet wised up to the fact that, by their principles, all of humanity stands condemned. In Cat's Cradle, Vonnegut clearly comes accross as the post-disillusion, frowner-at-everything sort of socialist.

Darn! I ended up sounding more negative about the book than I meant to. Let me repeat that I really do recommend it. I think I got something out of it that many deny can ever come out of a work of art: genuine enlightenment. Of course, it wasn't the sort of enlightenment that the author intended ... but that's what great books are like!
Posted by Lester Hunt at 11:56 AM

I too re-read Cat's Cradle recently after Vonnegut died. I picked it due mainly to the slimness of the volume. (I wanted my tribute to be quick :-) I did enjoy it the second time and like you, with a different eye.

I am in agreement with you about moral absolutism and the tendency towards nihilism - the Jonestown mentality. But do you think that it might also be a product of aging to some extent? The despair at not leaving the world better than one found it? Vonnegut was a depressive through his whole life. That too could explain it. You are absolutely right about the surreal lightheartedness of the narrative which leads up to a devastatingly bleak climax.

Do you remember the following lines which struck me as extremely prescient:

The conversation takes place between the narrator and a US diplomatic couple Horlick and Claire Minton in an airplane, while they are all headed toward the island of San Lorenzo. The Mintons describe why they had fallen out of favor with Uncle Sam and suspected of communist sympathy.

' I was fired for pessimism. Communism had nothing to do with it.'

'I got him fired,' said his wife. 'The only real evidence produced against him was a letter I wrote to the New York Times from Pakistan.'

'.... there was one sentence they kept coming back to again and again in the loyalty hearing,' sighed Minton. '"Americans",' he said, quoting his wife's letter to the Times, '"are forever searching for love in forms it never takes, in places it can never be. It must have something to do with the vanished frontier"."

'What was so awful about the letter?'

'The highest possible form of treason,' said Minton, 'is to say that Americans aren't loved wherever they go, whatever they do. Claire tried to make the point that American foreign policy should recognize hate rather than imagine love.'