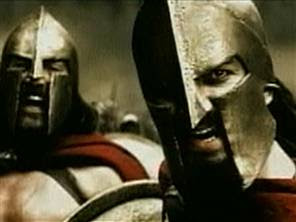 Our son, Nat, is about to go away to college, so yesterday I thought it would be a good time to view his favorite movie with him. It's out on DVD. (Later that evening, his buddy Matt came over to help him upgrade the memory on his laptop -- and watch the same movie ... again!)

One thing that makes this movie, about King Leonidas and 3oo Spartans holding off many thousands of Persians at Thermopylae, interesting to watch is the amount of hatred - "hatred" is surely not too strong a word - that was directed toward it when it first came out. It was hated by The New York Times, The Washington Post, CNN, the President of Iran. Even Norman-Lear-type liberals begin to shake all over and holler when they think about this movie.

As the science fiction writer Neal Stephenson pointed out, the main objections seemed to be these:

• “300” is not sufficiently ironic. It takes its themes (duty, loyalty, sacrifice, the preservation of Western civilization against enormous odds) too seriously to, well, be taken seriously.

• “300” is campy — meaning that many things about it can be read as sexual double entendres — yet the filmmakers don’t show sufficient awareness of this.

• All of the good guys are white people and many of the bad guys are brown. (How this could have been avoided in a film about Spartans versus Persians is never explained....)

Then too there was the complaint that it was historically inaccurate in ways that are favorable to the Spartans.

Some American leftists seemed fixated on the possibility that it might be pro-Bush.

Up to a point, this movie was what I thought it would be: just the sort of thing that would be hated by people who have the values that these particular people have. What none of the vituperative reviews prepared me for, what came as a complete surprise, was that it was about ideas (and, no, I don't regard being pro- or anti-Bush as ideas). And what were these ideas? That was even more surprising.

Repeadedly, Leonidas says in conferences with the enemy that he is appealing to their "reason." One of them tells him with a sneer that you Greeks are so "logical." The film lays great emphasis on the fact that the Ephors oppose marching out against the Persian invaders because it would profane a religious festival, the Carneia. It depicts the Ephors as if they were mystical priests, and not elected politicians (which is what they were). At the climax, Leonidas tells Xerxes that the Spartans are taking a stand against "mysticism and tyranny." More than once, the Persians tell the Spartans that their criticisms of Xerxes are "blasphemies." Leonidas is told many times that his campaign is a violation of both Spartan religion and Spartan law. Thus, events place the movie's hero in opposition to both (so to speak) church and state.

I take all this to mean that freedom and reason are good, while religion (or at least mystical religion) and tyranny are bad. Further, freedom is connected to reason in some important way, and religion, or at least irrational religion, is likewise connected to the lack of freedom.

(So much for the movie's being pro-Bush! As everyone knows, W is opposed to modern biology because it's agin the Bible. It should be obvious what side of the reason/mysticism divide he is on.)

All this is quite obvious to any comic-book-reading teenage boy (the target audience of this film). But the many critics who loathed the movie never seemed to notice this. Why, I wonder? Come to think of it, every single religious reference in the film is negative. Any time it rears its head in this movie, religion is nasty and oppressive. I haven't seen anyone mentioning this at all.

It does seem to be worthy of mention. I can't think of too many movies that are both pro-freedom and pro-"reason," and that even show some awareness of what reason is. (Leonidas seeks to convince others by giving evidence. He does not subject his own judgment to to political authority or to religious revelation, nor does he ask others to do so.) And it's hard to think of other Hollywood movies with the guts to even hint at a critical attitude toward religion.

If you want to make an action movie in which the good guys represent reason, I suppose the Greco-Persian wars are a pretty good choice of subject. This is where the Greeks pushed back the expansionist Persian empire. Some historians think that this, as much as any other single event, prevented Europe from becoming a mere peninsula of Asia. It permitted the West to become the West. As it happened, the Greeks invented logic and the rudiments of scientific method within the century and a half after Thermopylae (480 BCE). If the Persians had succeeded in imposing autocratic rule on them, I'm not at all sure this would have happened. 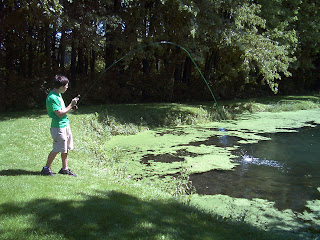 On the other hand, I have to admit that using the Spartans as symbols of freedom is a less fortunate choice, for the obvious reasons. If this were just a matter of a historical inaccuracy that has no effect on the meaning of the film as a narrative, I would be able to ignore it. But as a matter of fact it enables the filmmakers to dodge a crucial political issue: is it possible to be the sort of brilliant fighting machine the Spartans were and also represent reason and freedom (which the real Spartans did not)? Still, the film's philosophical virtues are so striking and so unique that I suppose this problem doesn't bother me that much.

So I guess I don't mind that this is Nat's favorite movie. The basic values from which his love of it comes seem sound to me. But of course I admit I'm biased. (Above you see him, earlier yesterday, hooking a big trout. This was the first time he had ever used fly-fishing gear. Such a clever lad!)
Posted by Lester Hunt at 4:00 PM

"It takes its themes (duty, loyalty, sacrifice, the preservation of Western civilization against enormous odds) too seriously to, well, be taken seriously."

Well, but there is no dearth of critically appreciated movies that take these themes seriously: Gladiator, Troy, Braveheart. So that can't be the problem.

I'm also skeptical that skin color of the bad guys was an issue. (I admit I didn't even notice the color differential.) I didn't see this objection raised in any of the reviews that I read.

Which leaves the campiness objection.

Even after the bloody awful voiceover presaged general awfulness, I wanted to like the movie. I think I managed to hang on until it went Star Wars bar scene on me, with all the silly creatures. (That this conceit is ahistorical would be a startlingly weak sort of objection to lodge against it.)

That the set design and construction was phony didn't help.

Heck, even the fight scenes were disappointing. (Too much sllllloowwwwwwww-mo.)

And though the guys put on good, fittingly intense performances, in context the result could only be bathos.

Still, it's a good workout .

I was told good things about this film... I was also told that "it is very pro-war," however.

I wish I had seen it, in the theater. One thing I like to do, when going to the movies, is get the popcorn... Here in Springfield, they offer free refills on all purchases of popcorn and soda. However, I was told that this film was incredibly gory... but that the first half hour was not that bad.

It's too late to see it in the theater now... though I just realized that now would be a good time for me to get it on DVD (it is on DVD right?... I am assuming so, because I saw a Facebook 'Note' from this guy, about how he was excited to have found his DVD of 300...) right now, considering that I am hardly able to eat anything, due to mouth pain - maybe this would be a good time to see graphic films.

And, while I am anti-war, I am thinking that I might like this film, based on what I have heard. Then again, for a movie like this, seeing it may be the only way to know for sure.

Thank you for your review and thoughts, about this intriguing movie.