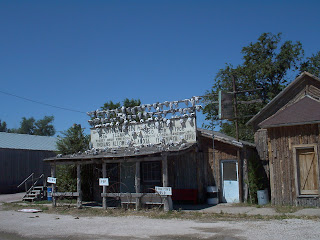 Actually, I'm leaving in a few minutes. My plans to go to California fell through for lack of funds, so I am returning to South Dakota, even though I was just there in July. Also, I wanted to visit once again my favorite camping spot east of Donner Lake, the Indian Creek valley, while I still can. There is a chance it will soon be taken away from me by an evil corporation with vast powers and international reach called -- the Sierra Club. Unfortunately, I'm not making this up. I'll blog about this insidious cabal of kleptocrats on my return, if not before.

By the way, the first time I saw the bar on the left, in Scenic, SD, it was 1982 and the sign (click to enlarge) said "NO INDIANS ALLOWED." They later painted out the "NO." I hear it is now actually owned by Indians. Even in western South Dakota, we have progress!
Posted by Lester Hunt at 12:19 AM