The Proposed Indian Creek Wilderness Area: Just About the Worst Idea Yet 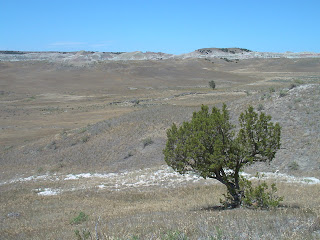 Since 1982, I've visited a vast, lonely area in the Buffalo Gap National Grassland many, many times. I've never told anyone where it is or how to get there, because, frankly, I didn't want to do anything that could contribute to attracting more people there. I go there because its a chance to be in a place where I can see wild terrain for at least ten miles in every direction -- and not a single human being, anywhere in sight! Now, I think I have to talk about it, because the Bureau of Land Management is apparently considering a move that in effect would cut me off from this wonderful source of inspiration. Apparently at the urging of the South Dakota chapter of the Sierra Club, they are considering declaring India Creek a "wilderness" area, banning all motorized travel there. If the always-objectionable Sierra Club gets its way (again!) it will be yet another example of government-by-pressure group, the rule of coalitions who have ends of their own, purposes that are quite different from the ones the rest of us have, or have any reason to adopt.

Why would this be such a bad idea? Because it would put most of the area beyond the reach of me or anybody remotely like me. Only local ranchers or wealthy people would be able to explore most of it. It is not practicable to visit most of it on foot. Only people who have horses, or can afford to rent or buy them, would be able to visit the greater part of this rugged area.

There are two reasons for this, both very simple. 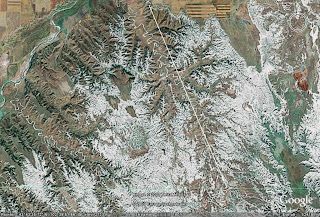 One is the nature of the terrain. Here is an image I got from Google Earth. I have drawn a white line (click to enlarge) from the northern end of the area, at what the BLM workers call "Cardiac Hill," to the southern end, at the gate to the South Unit of the Badlands National Park. As far as I know, Cardiac Hill is the only practicable entrance to the place. That white snakey thing you see roughly following my line is Indian Creek. It's doing the typical prairie river meander. Each of the wrinkles you see around the creek is a draw or side-canyon. (More exactly, the dark fingers are low areas, the cretateous Pierre Shale Formation, while the white areas are higher elevation, the more recent oligocene Chadron Formation.) Exploring these twisting mazes is one of the main attractions of this place. It is also flanked by high, flat table-land, much of it topped with pristine short-grass prairie. To step onto one is to walk back into the days of Crazy Horse. To visit any of this to a significant extent, you have to stay overnight. Day trips will not do it. 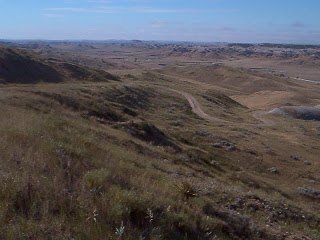 Here is where the road snakes down into Indian Creek Valley, from the top of "Cardiac Hill." Maybe you can see why they call it that. As your Jeep tips over the top of the mesa onto the descending twists of dirt two-track, you feel at first that it will just keep tipping. 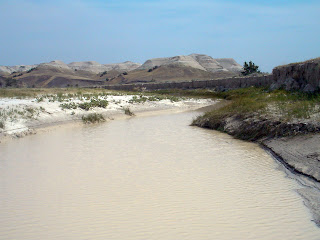 The other major factor, in addition to the nature of the terrain, is the water. As I think you can see in this picture, the water here looks like skim milk that has been spilled and swept into a bucket. It's gray. The pioneers used to say it's "too thick to drink and too thin to climb." )Why it's just a dern, cussed obstruction, dagnabbit!) And because the elements that make it undrinkable are actually dissolved minerals, not particles of any sort, it cannot be filtered. Solar distillation is not really practical either. (I looked into that.) This means, if you are going to be here for more than a few minutes, you need to carry your own water in. All of it.

I've done this many times, mainly in the years 1982-1992. I found that in country like this I need a gallon of water a day. The last time I weighed a backpack stocked for a two-day stay, it weighed over 70 lbs. And that I believe was without a tent. And here you do need a tent. It rains, even in August. (Unfortunately, this is not a desert. There's water, just not the kind you can use!) 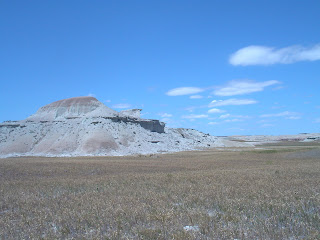 It's beautiful country, but travel here is very arduous. On foot, it's almost impossible to get far at all. Local legend has it that Butch Cassidy and the Sundance Kid came through here fleeing the law and almost didn't make it. 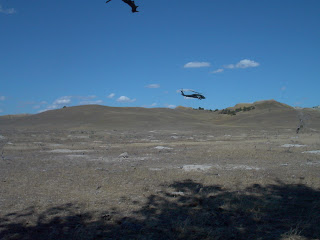 In all the years I came there on foot, I never got much further than this large prairie dog town, about 2 1/2 miles (in a straight line) in from the entrance on Cardiac Hill. The white mounds you see on the ground are the burrow entrances. (You often see the US Air Force, from nearby Ellsworth base I suppose, doing exercises here in their choppers.) I tried everything -- returning to the car just to get water, caching water along the way (carrying two gallon jugs in my hands and two in my pack as far as the cache point). It was too darn difficult to get much further south than this.

I should add that traveling on foot here is not just arduous. It is also dangerous, especially if you are alone (as I almost always am). I've had two very close encounters with rattlesnakes here, one of which was so huge I didn't know what it was at first. There are also many opportunities to break a leg. (I once broke a leg in a remote location, and I highly recommend that you delay doing so as long as you can.)

Come to think of it, I have never, in the twenty five years I have been coming here, ever seen anyone who came in on foot, other than me and people I brought with me. The reason for this is obvious: It's not good idea! I hereby recommend that you not do it! 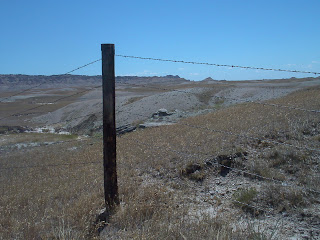 This summer, for the first time ever, I finally made it all the way from Cardiac Hill to the southern boundary of the area, where the national park begins, 6 3/4 miles to the south (that's as the crow flies: if you walk or drive instead of flying, it is further). I did it by driving the jeep three or four miles and walking the rest of the way. (I just couldn't trust the jeep to make it through those last creek-crossings -- too sandy and slushy!) Here you see the fence bordering the park, at the end of the road. That's Sheep Table Mountain on the horizon, the most spectacular feature in the South Unit. 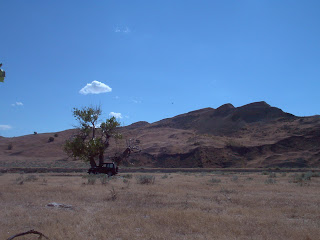 To be fair, any sort of travel here is very tough (except, I assume, for horseback and helicopter -- speaking of which, you can see another 'copter here if you click and look above the hill). Even going by car can be full of trouble. On three separate occasions I have gotten stuck: once trying to cross Indian Creek, once in the sand on Cardiac Hill, and once in a quagmire produced by a sudden rainstorm. Each time I had to be pulled out by ranchers. Two of them were lovely, generous folks who wouldn't let me pay them. The third one was a bitter, angry guy on Spring Draw Road who charged me $250. He also kept berating me for being fool enough to go in there by any means other than horseback.

For travel by car, the biggest worry is weather. The two-track road in the valley is only passable when dry. If it rains for very long at all, this black Pierre formation clay turns into a nasty glue locally known as "gumbo." Think of trying to drive through a deep vat of old-fashioned library paste. A four-wheel drive vehicle is no protection against that. Believe me, I know! 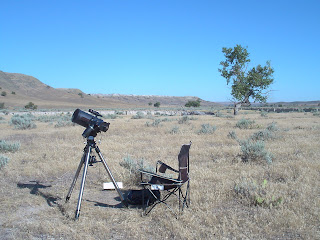 The system I finally devised is this. I drive in and sleep by my jeep, ready to jump into the car and drive out if it starts to rain, even in the middle of the night. This is a burden, because I like to bring my telescope, to take advantage of these wonderfully dark skies at night, so far from city lights. Packing a telescope in the rain in the middle of the night is not fun. But I'm determined to never get stuck there again. And for five years, I haven't. (That schmuck who charged me $250 taught me a lesson, and I don't have to be taught twice!)

Now, I suppose someone at this point might say, Wait, you are arguing for allowing motorized travel, and yet you are telling me how hard it is to travel there by car? Well, the point is, as hard as travel by car is here, travel on foot is much worse. If that were all I was allowed, I would go back to being trapped in the area of the prairie dog town, and only exploring features in the northern-most one third of the valley. And I can just leave my telescope at home. It weighs as much as four or five gallons of water! 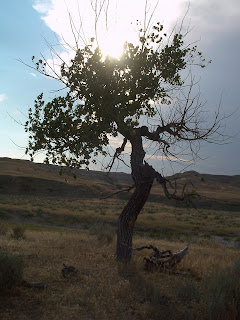 One obvious question remains: If prohibiting cars in this area is such a bad idea, why is it happening? The Forest Service has backed the Sierra Club's proposal. Now all that remains is to see if Congress will enact it. What is going on here? This post has already gone on too long, and I'll try to post on this question soon.
Posted by Lester Hunt at 10:37 AM