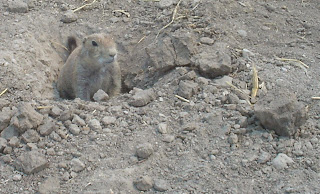 I've loved black-tailed prairie dogs (Cynomys ludovicianus) since I first moved to the Steppes of central North America in 1982. I visit them as often as I can, and this week I spent another couple of days in their midst. I sat in a folding chair on the edge of a prairie dog town several acres in extent, watching them through binoculars. (I'm still in South Dakota as I write this.) I can't resist writing one (just one, I promise) post about prairie dogs. This is it. (On second thought there probably will be more of them. Sorry!)

Why be interested in prairie dogs? Well, if I can assume that you like nature and wild things, especially wild mammals, I can give you several reasons.

First, like you and me, prairie dogs are diurnal. Most wild mammals seem to be nocturnal. Prey-animals like the dark because its harder for predators to see them, and predators like it because that's when the prey is up and about. Prairie dogs are up when you are up, and they sleep when you sleep. That means more hours in which you can see them.

Second, prairie dogs are very conspicuous. Most herbivores live by lurking and sneaking. To be seen is to be eaten. Therefore, they avoid being seen. Prairie dogs developed an opposite sort of strategy of predator avoidance. The have an alarm system. When one of them sees a predator, he lets out a predator-alarm call, a rhymthic Cheerk! Cheerk! Cheerk! If you get close enough to hear the inhalations between the vocalizations, it sounds like Cheerk uh Cheerk uh Cheerk uh! They must be the most in-your-face herbivores in North America, except for the bison I suppose. The result, once again, is you get to see a lot of them. 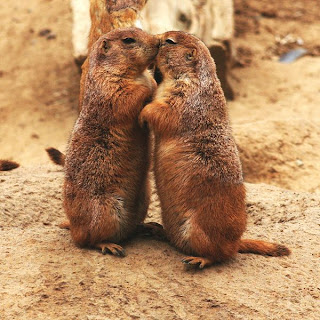 Third, they have many interesting traits, some of which make them seem human. Like you and me, they are colonial -- they mostly live in groups. Heck, we even call them towns! You often see them visiting each other for no reason at all other than to exchange caresses, or a mysterious oral-contact gesture that animal behaviorists call "kissing." (See Wikipedia photo to left.) It seems to have something like the same meaning that a human kiss has. They practice polygynous mating (one male with a harem) and evidently stay married for life (a practice humans had here in the West until very recently).

One behavior that everyone finds interesting is the rather mysterious one that Prof. John Hoogland named "the jump-yip call." (See picture below, from City of Boulder CO website.) 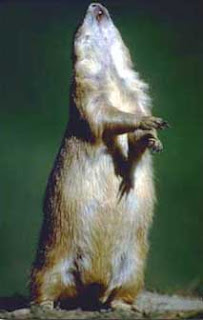 Every once in a while one of these animals will, with no environmental provocation that anyone can see, suddenly stand up full-length, throw his little forelegs high in the air, as if in exaltation, and let out a yell that sounds like Wah-hoo! or sometimes Whee-ya! And it's contagious. One will go Wah-hoo! and another member of the same coterie (male plus harem plus offspring, mainly) will go Whee-ya! Nobody can be sure just what it means, but hearing it you can't escape the impression that it has something to do with well-being. Some researchers call it "the all clear call" (ie., the opposite of the predator warning). To me, it sounds like an Ain't life grand? call.

They are fairly good at recognizing their enemies too. This week I saw them giving the predator warning call when a coyote walked through their town (he was actually just trying to avoid getting too close to me), and a double-time, extra-loud version of it when a prairie falcon swooped down at them -- but they ignored cows, cottontails, a thirteen-lined ground squirrel, and a family of burrowing owls. (Burrowing owls do not eat prairie dogs or their young -- they just like to live in their abandoned burrows.) It hurt my feelings that they classified me with the coyote and falcon -- barking if I ever got too close, and in one case even giving the heavy-duty swooping falcon version of the call. To prairie dogs I am at least as harmless as a cow, it seems to me. Come to think of it, though, they are right. They don't know me as an individual. They have to think of me, as racists do of their fellow humans, not as an individual, but as a member of a group. (Oh, you're one of them.) As a species, I have to admit, we are predators, not to be trusted by the likes of these little guys. (More about man-versus-prairie-dog in a future post.)

Anyway, they are charming, interesting, and not at all shy. What's not to like? Let's hear it for prairie dogs! Whee-ya!
Posted by Lester Hunt at 7:42 PM

Great piece on the prairie dog, my man!

My daughter has a video tape of a PBS show called "ZUBOOMAFOO" (or something like that) and the hosts spend a great deal of time visiting a vast prairie dog community. They also jump up and down shrieking like p.d.s, much to my daughter's delight!

Hope you're having a good trip!

Craig, Kali -- I think there ought to be an animated prairie dog character, like Timon the animated meerkat in the Lion King. But as far as I know, there isn't. A missed opportunity, that!