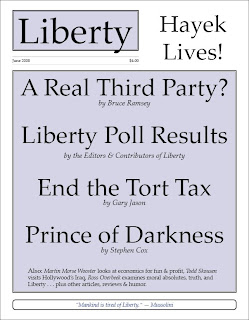 Last weekend, the Libertarians nominated former Congressman, and former Republican, Bob Barr for President. This is probably the most important single event in the history of their party since its first presidential campaign in 1972, as it means they will get much more attention, and probably far more votes, than ever before. It is also historically interesting in another way -- as one more bit of damage the Republicans have done to themselves since 9/11. People are continuing to grab life preservers and jump out of their neocon ship.

As Bruce Ramsey points out in the June issue of Liberty, this raises once again an interesting issue that Libertarians do sometimes find themselves facing. Do you really want to do in 2008 what Nader and his supporters quite possibly did in 2000? Some are saying that Barr could cause the Democrats to win this time.

Actually, in my case, the candidate I would vote for if I don't vote for Barr would almost certainly be Obama. There are no circumstances (except, possibly, torture) in which I would vote for an imperialist, authoritarian warmonger like McCain. This raises an interesting sub-issue for me. Suppose the Barr vote benefits Obama. Does this, by itself, mean there is no "spoiler problem" for me?

Again, I don't think so. There is actually one good reason to always go with the spoilers. After all, there are good reasons why I don't like the idea of voting for Obama. Granted he is somewhat less imperialistic than McCain. He is probably also more pro-liberty (at least slightly) on a number of domestic issues (eg., abortion, the war on drugs, the domestic war on terror). But it is also true that if elected he will serve up more of the same socialism-plus-tapwater (eg., more "free" health care) that the Democrats have been decanting since 1933. If voters are going to third party candidates, the major parties will know that they are doing something to chase these people away. If there are enough of these votes, the majors will want to bring them back. If Barr takes enough votes away from Obama, the Dems will have a reason to nominate less socialistic candidates in the future. If he takes enough votes way from McCain, the Republicans will have a reason to nominate candidates who are less imperialistic than he is, next time around. As a matter of fact, both these things can happen at the same time.

So, though spoilers have a negative effect on the current election, they have a positive effect on the next one. And the latter effect becomes more and more important as the "spoiler problem" also becomes more important: that is, the more people will vote for the Libertarian candidate and "spoil" the election, the stronger my reason to join them. In other words, the I have a reason to vote for the a third party candidate, and in addition a reason to not vote for one. This year, both reasons are particularly strong.

Of course, they are different sorts of reasons. The reason to not be a spoiler has to do with caring who wins the current election. The reason to be a spoiler has to do with caring about the future. Right now, I am leaning toward voting for the future.
______________________________
* I am assuming throughout that it makes a difference who you vote for, and that the difference it makes is that it raises (or lowers) the probability that the candidates that you vote for (or refrain from voting for) will win. This is actually not true, just because the probabilities involved are too small to matter. As Wendy McElroy has pointed out, it is much more likely that I will be killed on the way to the polls than that my vote will affect who wins or loses. Voting is purely symbolic, insofar as it is a rational thing to do at all (which of course is doubtful). But the present discussion could be translated (with some extra verbiage) into a series of claims about what my vote symbolizes.

The soundness of this argument really depends on whether it's possible to carve up the coalition space in the desired way. The "less socialism" strategy might be zero-sum (or worse) for a Democratic candiate, for example, since it's just as likely to encourage leftier Dems to vote for a more socialist 3d-party spoiler the next time around.

"q," Yes, exactly. Because my argument applies to more-socialism voters too. The best you can do here is give parties a reason to do something. If they then do it, someone else may as a result give them a reason to do the opposite. There is no guarantee your reason will be the strongest.

The less homogenous our country becomes - and the demographic trends suggest it is going to become exponentially less homogenous in the coming decades - the less likely it will be that two parties can satisfy people. Our winner-takes-all system means, I believe, that there can only realistically ever be two viable parties (one of the two parties will change to absorb third-party voters whenever a third party makes headway). So instead of having a situation like, say, Iceland with a very homogenous population that will differ basically only along a couple lines of thought, we will have a situation with sharp divisions along racial lines, religious lines, cultural lines, and ideological lines - yet have a system really only designed for two parties. To me this sounds like a recipe for louder, angrier, more partisan politics in the years to come. And to look even further into the future, I see a breakup of the country a la Yugoslavia.

Anon, I love it when countries break up. I haven't researched this thoroughly, but my impression is that breakups, when the are permitted to happen, are good for the people within the states that break up. On the other hand, resistance to breakups seems to be the largest single cause of civil wars, which as everybody knows are the most destructive, deadly, and merciless wars there are. So, thanks. You've given me hope.

Break up can be subverted if a multi-party/federalist system is in place. Though, this matters only if you are opposed to secession. Good comments on secession appear in Kit Wellman's new book.

I think the terms spoiler and electable prevent true change as anyone is electable once they are elected, and the only way to know for sure if someone is electable is after the fact. Sure there are traits that indicate whether someone might win, but the political science research indicates that the factors that determine the winner has more to do with external factors (war, economy) and party identification than anything specific about the candidate. Though this research may not apply to the current election given that the Dem. nominee will not be a white male.
Voters can make anyone electable, and thus a viable candidate, by voting for him/her.
Thanks for another interesting post.

"Break up can be subverted if a multi-party/federalist system is in place."

Well, you're the expert, but I would think that the relevance of federalism depends on the type of federalism you have. Before the civil war, we had a federalist system (central government with state sovereignty) and it was the main reason the south seceded (or tried to).

As a general rule, though, I would agree that decentralization can make secession unnecessary or unattractive, which is probably your point.

I'm not sure about the expert part but you are right about the point I was trying to make. The US Civil War is a good counterpoint to what I was saying. I am not sure if the USCW was the result of the failure of federalism or the failure of one side to respect the rules of federalism. Though, federalism in its purest form (and we know what to think about purity) would allow for secession, or at least nullification. My inclination is that if certain regions or groups are given enough autonomy they will not have a reason to secede. But then if that's the case, why have union if that much autonomy is granted? Moreover, if someone is "granting" the autonomy then that same entity has the power to take it away eventually, thus revealing the autonomy as a fiction. For federalism to live up to the billing secession must be part of it. But, can secession be preserved legally/constitutionally since by seceding you are breaking away from that law, thus it wouldn't be binding? Or would it?