David Horowitz: Not a Consistent Friend of Free Speech 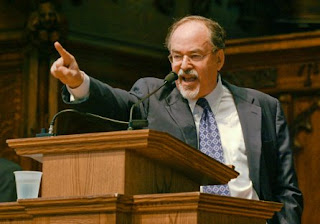 David Horowitz is angry. (Yea, I know, so what else is new?) This time it's about a cartoon he saw posted on a bulletin board by the Muslim Students Association at UW-Milwaukee when he went there to give a talk. (Hat-tip here to Ken Mayer.) You can find the cartoon here, together with a call by a National Review writer for the MSA to apologize to Horowitz and the Chancellor to reprimand them. Here you can find an essay by Horowitz alleging that the cartoon is anti-semitic. UW-Madison poli sci prof Kenneth R. Mayer commented, rightly I think, that there is no more reason for apology or reprimand here than there was when the UW-Madison Badger Herald offended the MSA by publishing the notorious Danish cartoons. Horowitz replies here. "The difference between the two cartoons," he says, "is that the university has rules against religious bigotry. The Mohammed cartoons were nothing of the sort."

I think this is a clear case of "what's sauce for the goose." I see nothing in this cartoon to indicate that it is about religion at all. And, as a friend of mine pointed out, except for a slight exaggeration in the nose, there is almost nothing in this cartoon to indicate antisemitism. True enough, references to Nazism (the armbands in this cartoon) in connection with someone known to be Jewish is offensive and contemptible for several different reasons, but they themselves don't rise (or descend) to the level of antisemitism either.

Above all, displaying the cartoon is clearly within the ASM's right of free speech. If UW had a rule against an offense as nebulous as "religious bigotry" (which of course it doesn't), it would obviously violate that right.

For my part, I think an institution like the university has to have (viewpoint-neutral) rules against harassment and intimidation in face-to-face encounters. Arguably, such a rule might be used against a student who calls a speaker an anti-semitic epithet. But this cartoon falls well outside that narrow class of actionable offenses. Distasteful as it may be, it is simply part of the cost of taking controversial positions on emotionally charged issues.

As William Allen White said, “Liberty is the only thing you can't have unless you give it to others.” Horowitz needs to improve his grasp of this fundamental truth.

Minor dissent: my impression is that the way the caricature is done--big hooked nose and such--bears an uneasy resemblance to established anti-Semitic stereotypes. But year, Horowtiz doesn't get points for consistency.

Halq, You're right. There is some evidence of antisemitism in the cartoon. Just not enough to justify institutional action, even if there is a university rule against being antisemitic. (Which there isn't, and shouldn't be.) BTW, maybe I should have said that I think Horowitz is quite right to be angry about the armbands. But angrily criticizing is one thing and an official reprimand is something else.

Well, I've never expected consistency from neo-cons... Remember back in the election debates in 2000, when Bush was taking Gore to task for his and Clinton's getting America embroiled in wars overseas that weren't any of its business (Bosnia, Somalia)? 'nuff said.