I Weigh in on the Miley Cyrus Thing 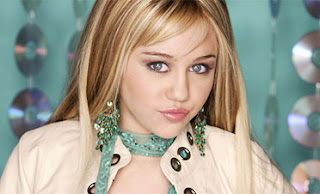 There's something about reading final exams that makes me want to surf the net for ten minutes at a stretch, reading about things that are none of my business. Here is something that was quite a flap for a week or so recently. Fifteen year old Singer and actress Miley Cyrus appeared in a series of photos (I think the fourth one in the slide show is probably the so-called "topless" shot) in Vogue Magazine, some of which seem obviously sexual and just as obviously aimed at adults. One feature that drew a lot of ire was a video on the Vogue web site in which she snuggles with her dad in ways that some people found creepy (it seems to have been removed). There was a chorus of "you slut!" from her fans, an apology, some back-pedaling. (If you think the above picture is one of the controversial ones, you should probably take a look at the Vogue slide show. Or maybe time-travel to an earlier century.)

The largely negative reaction to the photos begot its opposite reaction, and some have suggested that Ms. Cyrus is simply a teen who is taking charge of her life, exploring her sexuality, and good for her (hat-tip here to Hugo Schwyzer). As an ultra-libertarian and the parent of a teen, I have a lot of sympathy for this reaction, at least for the values that lie behind it. But I think the facts of this case are probably a lot more complex than this interpretation makes them sound. This is not, after all, just some high school sophomore exploring her alternatives. Aside from the semi-relevant fact that young Mylie does not even attend high school, there are several powerful causal agents involved in addition to her own deliberation and choice: a high-profile photographer, her parents*, two giant business corporations (Disney and Conde Nast, the owners of Vogue), and positively shocking amounts of money. To some extent, I am sure she is being used by agents who are basically moral idiots.

There is one other feature of the situation that dampens what might otherwise be my enthusiasm for Miley's exploratory behavior. Many girls discover at an early age that they have a peculiar sort of power over men. With just a little practice, they can get them to do amusing things: stammer, bump into things, give them peculiar amounts of drooling attention. It must be very tempting to inspire this sort of reaction as an end in itself. After all, it is a sort of power. But power over people, when sought as an end in itself, is always evil. It is power over nature that is good. (This was Ayn Rand's revision of Nietzsche.)

Here someone will want to object: "Power?" -- there's nothing coercive about it, and if men make fools of themselves over women, it's their own darn fault. And besides, the behavior you are talking about is perfectly natural. And, besides, without the pursuit of this sort of power, whole branches of art and popular culture would not exist. All this is of course true. It means, among other things, that the question of how parents and others should respond to this sort of behavior is a deep and difficult one. A coercive response, including parent-on-child coercion, is not justified. That being said, it is also true that the typical behavior of the coquette, the tease, the thousands of web cam girls shaking their money-makers on YouTube and amateur pornography sites is ethically problematic. Surely, at a minimum, such behavior, in children, should not be encouraged by adults. The fact that said adults stand to make money off it only makes it worse.

__________________________________________
* They seem to be wonderful examples of the type of over-wealthy ignoramus that America n capitalism produces in such abundance. They named her little sister "Noah." Her dad is famous for one of the worst songs ever to soar into the stratospheric portions of the top 40. (I almost said the worst song, but I had forgotten about "Who Let the Dogs Out?" Why would my memory play such a trick on me, I wonder?) By the way, notice that the one detail in the elder Cyrus' signature song that makes it stick in the memory like a splinter under a fingernail -- namely, substituting "achy breaky" for "achin', breakin'" was his idea.
Posted by Lester Hunt at 9:03 PM

"But power over people, when sought as an end in itself, is always evil."

I'm not terribly clear on the outlines of Nietzsche's account of power, but it doesn't seem to me that hegemonic power as an end in itself is consistent with that account. If it were, you'd expect that Nietzsche would have endorsed, say, war per se as a noble, creative pursuit. Or?

BTW, I met the Cyruses (Cyri? [!]) back shortly before Miley exploded into ridiculous superstardom, and they were lovely, gracious people. I share your skepticism about the wisdom in pursuing success in the entertainment industry during childhood, but I'd have to guess that they're going about it in the best way possible. (Which isn't to say they ought to have gone about it....)

Side Note: Surely this is the first blog post ever that mentions both Nietzsche and "Achy, Breaky Heart."

"Surely this is the first blog post ever that mentions both Nietzsche and 'Achy, Breaky Heart.'"

As to the power issue, I guess my interpretation is that N. does not distinguish between the two kinds of power, which on the assumption that they really are different makes many of his pronouncements deeply ambiguous. Is he really praising power over people? There may be no real answer to that question. It might also render undecidable the issue of whether war can be an end-in-itself -- and, sure enough, that is one of the things he is rather ambiguous about!

Annie Leibowitz and the Cyruses are all artists and artists enjoy "pushing the envelope" as they say, so in that context the photos make alot of sense. The Father-Daughter pose in the same context means that she shares her talent gene with the father in spite of the generational difference and parent relationship. It does make one think.

In old European civilization girls and boys often married at 14 or 15 years (Romeo and Juliet come to mind) so "teenage sex" was the norm in human history. In our "advanced technical civilization" culture we repress sexuality and turn alot of our teenagers and young adults into idiots.

The creepiness of the Billy Ray and Miley shots puts me in mind of the creepiness of things like "purity balls" (father-daughter proms where she pledges to remain a virgin till marriage and he pledges to protect her purity), and that horrible Bob Carlisle song, "Butterfly Kisses"; read the lyrics sometime and feel the chills go up your spine.

There's something very odd about how the part of the U.S. that's ostensibly the most conservative (the South), gives rise to these things, "little miss" pageants (remember JonBenet Ramsay), and Leanne Rimes as a country sex symbol at 14 (yes, people married earlier, but when they don't, now, that's just creepy), in addition to Britney and Jamie-Lynn Spears...

And then they think it's blue-staters who are pervs and weirdos...