On the Purity of Walden, and Against Purity as an Ideal 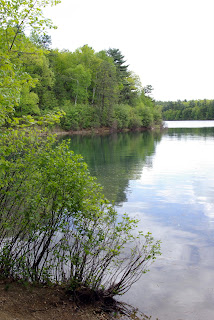 While I was in Concord last week I managed to walk out to Walden Pond via the railroad tracks one of Henry's favorite ways to get there. To the left you see "Thoreau's Cove," where he would bathe in the morning, as it looked on that day. In a way, I ought to write something lyrical/devotional about Thoreau and his Walden sojourn, but I think the only thing I have to say that would half-way original involves expressing a doubt or worry about an aspect of his world view (though I should add that it is an aspect that overlaps to some extent with my own).

The scenery of Walden is on a humble scale, and, though very beautiful, does not approach to grandeur, ... yet this pond is so remarkable for its depth and purity as to merit a particular description. It is a clear and deep green well, half a mile long and a mile and three quarters in circumference, and contains about sixty-one and a half acres; a perennial spring in the midst of pine and oak woods, without any visible inlet or outlet except by the clouds and evaporation.

That is Henry's description of Walden Pond in the chapter of Walden called "The Ponds." Walden, as he said, is noteworthy for two things (among others): the purity of its water and the fact that it has no surface inlets. Indeed, these two features are surely connected. Any given water molecule in Walden has been sitting on the surface of the earth for a relatively short period of time. It has not long been wandering from lake to lake, exposed to light, air and nutrients. The result is a gem-clear lake. I have noticed this phenomenon many times in other lakes. The lake you see be 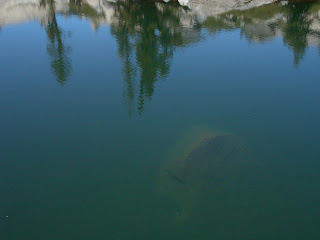 hind me in my blog portrait in the left sidebar is one I have visited many times since 1969. It is perched atop a mountain of granite, fed only by melted snow. To the the right is a view of the lake, looking down into it. The shape you see near the bottom of the picture is a large boulder at the bottom of the lake. (Click to enlarge.) The lake has algae, but no weeds, no macroscopic plants at all. In fact, my lake is much "purer" than Walden, as it doesn't even contain any fish.

Maybe you can now guess what my point is: Where bodies of surface water are concerned, purity is death.

What is purity, after all? The idea of purity rests on three more fundamental ideas. To have a concept of purity you must, first, have the idea of a type of material as properly belonging in a certain domain (eg., domain: lake; material: water). Second, you need the idea that everything else is (eg., anything that can obstruct my view of the bottom) foreign matter and does not belong here. Finally, when this foreign matter invades the material that belongs here, what you have (third fundamental idea) is pollution (the Greeks called it miasma).

Aesthetically, purity is a very attractive idea. Anyone who has looked into a flawless gem or a pure (ie., dead) body of water knows this. But I see deep ethical and political problems with the idea, possibly fatal ones. Purity is, first of all, a entirely negative. To achieve purity is simply to chase certain things out, or annihilate them. Second, it is profoundly reactionary. If purity is ever achieved, all changes in regard to it are by definition bad and to be resisted. So its ideal end state is stasis stillness. In view of that it is no surprise the purity and death go hand in hand. Finally, if the concept is in a way profoundly intolerant. The idea of purity involves splitting the world up into the element that belongs here and the foreign element that does not, and should be chased back home or wiped out of existence. 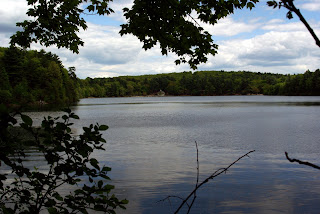 We associate the idea of purity with ascetics, and so we should. Ascetics are deeply negative people, obsessed with chasing out the bad thoughts, flushing out their bad feelings, avoiding "wrong" foods and, in extreme cases, flushing "impurities" out of their very bowels. But it also is of great interest to a certain sort of environmentalist. After all, as I have said, pollution is nothing but the introduction of impurities. At their most purity-obsessed extreme, environmentalists can be very negative, reactionary, and intolerant people. Finally, and less obviously, purity is an idea that is very congenial to racists. Indeed, you could almost define racism as nothing more or less than the application of the purity-ideal to race. I can't really weigh in on the question of whether the Third Reich was the first consciously environmentalist government, but I can say there is a connection between Nazi racism and Nazi conservationism: they share a common theme in the idea of purity. Note that the Nazis referred to racial intermarriage as "race-pollution." To a racist, that is exactly what it is.

Thoreau's hunger for purity is both attractive and worrisome. (On both points, see the opening pages of the Walden chapter, "Higher Laws".) The more I think about it, though, the more I want to resist my own tendency to seek purity. And to exhort others: Oh my brothers and my sisters, be positive, be tolerant, commit pollution! Dare to be impure!
Posted by Lester Hunt at 8:39 AM

Nice post, Lester! The anthropomorphic global warming alarmists seem very much a breed of purists, bordering on a new religion. Implicit in their view is that human consumption and output (read: greed and selfishness) are polluting our planet, changing our climate. Change is seen as a bad thing, they cling to an erroneous belief that earth's climate was in some pure balance before evil capitalism disrupted it. The climate has always been undergoing changes, the AGWers cherry-pick convenient timelines in earth's history and conveniently ignore large bodies of other data that do not support Al Gore's apocalyptic vision. (a convenient lie?) The very chemistry of earth itself becomes an impurity for these folks; CO2 is viewed as a pollutant (plants need it to live), and chlorine is a poison which should be removed from the planet. I find it ironic that they view climate realists as arrogant - their own hubris is breathtaking.

I'm glad you visited Walden Pond on your own terms. You probably know that during the peak summer months, the parking lots around it get filled up (with SUVs mostly) and the rangers then turn others away until spots are available. There can be long lines of cars creeping along, waiting for a slot, idling their engines. No dogs are allowed on the pond or paths around it, and I think there are restrictions on where and when you can swim there and be there. I imagine Thoreau would detest this whole scene. Hope you and Deborah had a good seminar in Concord!

Purity is also a goal of Christians - moral purity, aiming to not be polluted by the sins of the world around, and sinful tendencies within. Now, I don't see much connection between this conception of purity, and that of either National Socialists or radical "Earth First" people-hating environmentalists. Both the Nazi and the ecozealot, see purity as a realizable external ideal; that is, that society can physically possess purity in the gene pool or the natural environment, or what have you, that this can be obtained here on Earth, through application of the right principles, enforced by State action, etc. Whereas, on the contrary, the Christian locates the source of impurity as something that is primarily within - yes, even as it is without, in others around, which is because it is within all, incl. the Christian - and moreover, the Christian doesn't see freedom from sin as being absolutely realizable in this world, but it is seen as a high ideal to strive for, even though it is ultimately Christ who realizes it for us, and grants salvation and sinless immortality in the next life.

The difference between the Christian vision of moral purity and the Nazis' and ecoNazis' visions of social and ecological purity therefore, is exceedingly great. The latter tends towards a course of increased State interventionism to try to enforce and create purity, by brute force. Their goals are utopian. Whereas the former satisfies itself in an individual believer, and a communal (in terms of a community of faith) effort to mutually encourage each other towards such a goal, and the State is not involved, except insofar as it can punish and restrain evil, and different Christians will have differences of opinion on how far such should extend.

For my part, as a Christian, I see striving for moral purity as a noble, high ideal, whereas the purity the National Socialists and ecozealots seek, as a utopian, pie-in-the-sky, fantasy, engendering great tyranny.