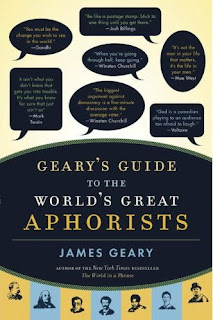 I've been reading a delightful book, Geary's Guide to the World's Great Aphorists (Bloomsbury, 2007), by James Geary. It is a great way to meet a wide variety of very interesting writers. Here are some samples from the book, all of which were new to me (except for the one by Whitehead):

"It's going to be fun to watch and see how long the meek can keep the earth after they inherit it."
--Frank McKinney Hubbard

"No snowflake in an avalanche ever feels responsible."
--Stanislaw Jerzy Lec

"A state is as easy to ride as a bicycle: handles at the top, chains below..."
--Victor Shendorovich

"If elections changed anything, they would be forbidden."
--Kurt Tucholsky

"The lack of money is the root of all evil."
--Mark Twain

If you don't quite get that one, it is expressed more clearly here:

"Prosperity is the best protector of principle."
--Mark Twain

One more by Mark. I can't resist:

"An uneasy conscience is a hair in the mouth."
--MT

"A child educated only at school is an uneducated child."
--George Santayana

I said the same thing, but of course not as well, here.

Old Tom knew a thing or two about principle:

"Want of consistency is a natural consequence of want of principle."
--Tom Paine

"The devil is an angel too."
--Miguel de Unamuno

"A man is a god in ruins."
--Ralph Waldo Emerson

"Bad art is a great deal worse than no art at all.
--Oscar Wilde

"Civilization advances by extending the number of important operations which we can perform without thinking of them."
--Alfred North Whitehead

"Force is as pitiless to the man who possesses it, or thinks he does, as it is to its victims; the second it crushes, the first it intoxicates. The truth is, nobody really possesses it."
--Simone Weil

Anon, You're getting more and more mysterious.

this post reminds me, the art of the aphorism is not just confined to the pages of history and philosphy prof's blogs. in serbia it has become something of a national pastime: “We have got our war assignments. We are to be the killed civilians.”
dark.
http://www.nytimes.com/2007/12/02/world/europe/02serbia.html?_r=1&scp=1&sq=serbian+aphorism&st=nyt&oref=slogin

Wow, I didn't know anything about this. Here is a whole subculture that is entirely new to me. This phenomenon might explain why so many of the writers in Geary's book are very recent and from Eastern Europe and the Balkans.

Here is way to the link you gave that might be more easy to use for some visitors.

"Everything we do eventually turns to sh*t"...Food Channel Motto

Here's a Danish one, by Poul Henningsen:

There's no such thing as bad taste, only good taste, and that's bad.