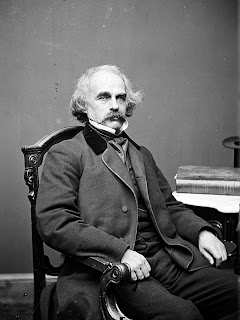 I'm leaving for a Liberty Fund colloquium I'm directing on Hawthorne and Thoreau -- in Concord Massachusetts itself! Both men, as everyone should know, lived there, where they were good friends and fishing companions.

When Nathaniel and Sophia Hawthorne moved into the Old Manse in 1842, the garden that supplied their vegetables had been planted by Thoreau. This was three years (to the day, almost) before he moved in and Walden.

In all the times I've been there, I've somehow failed to come back with any pictures of Walden Pond (do Catholics take snaps of the Vatican's interior when they go their for an audience with the Pope?). This time I'll try to make good that oversight and post one or two when I return.

Anyway, I probably won't be able to post until I return after Memorial Day. Too busy! Have a great holiday weekend everyone!
Posted by Lester Hunt at 9:03 PM